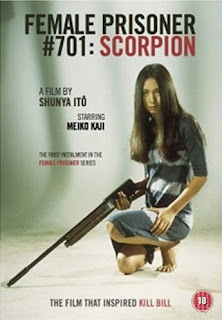 OK I’ll get this out of the way – yes, it is a ‘women in prison’/’pinky violence’ film and yes it is as sleazy as you’d expect coming from these sub-genres. However in my defence it’s a cult classic and many critics do consider it to have arthouse credentials. Plus it’s my blog and I don’t want to just review Hollywood tripe all the time!

Well that’s my excuse for watching it out of the way.

Female Prisoner #701: Scorpion is the first of a successful series of Female Prisoner films based on the manga by Tooru Shinohara, and stars cult favourite Meiko Kaji, star of Stray Cat Rock and the Lady Snowblood films. As is expected from an exploitation film made in Japan in the 70’s, Female Prisoner is a violent and sleazy film that doesn’t shy away from much. It’s the sort of film that makes you want a shower after you’ve watched it. However, what sets it apart from a lot of the other smutty trash out there is the quality of the filmmaking. It’s no Citizen Kane of course, but it presents violence that feels painful rather than just overly bloody, it has a memorable and powerful lead female performance, and it also has a visual style that at times is eye-popping. It also avoids a lot of the laughable dialogue contained in most films of this type by keeping the main character practically mute (apparently lead actress Kaji insisted on this as she felt the obscenities littering the original script cheapened the film). This creates a mysterious ‘man-with-no-name’ effect, upping the cool factor several times over as well as allowing the film to tell it’s story more visually. 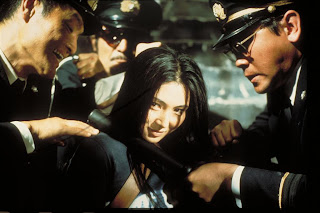 The plot is not one of Female Prisoner’s strong points though; basically a woman, nicknamed Matsu, is cruely used by a police officer she once loved to frame a criminal gang, so she attempts to kill him and gets imprisoned. Through most of the film we watch as she suffers under the hands of the sadistic guards and fellow inmates. At the same time the police officer plants an assassin in the prison to kill her. The film builds to Matsu exacting revenge on those that have crossed her in a bloody climax.

As I mentioned before this is a genuinely brutal film. Some of the violence is tame Buy Viagra Online Pharmacy No Prescription Needed by today’s standards but the sexual nature of much of it and the relentless sadism of the guards makes it at times an uncomfortable watch. It isn’t the extravagant, balletic violence of the kung-fu and samurai genres, these are grubby scenes of torture that repulse rather than entertain. It gives the film a disturbing edge, but sometimes you wonder why you’re watching it. When Matsu turns the table on those responsible it does become more exciting rather than disturbing though and you can’t help but root for her.

The style of the film was what impressed me most though. A bold use of colours help bring the film alive and are a signifier of the film’s comic book roots. There is little thought towards naturalism, the film is full of theatrical spotlights and unnatural greens and reds that as well as look good, help prevent the relentless violence from getting too real. Revolving sets and disorientating camera angles are also incorporated to great effect, notably in a brilliant flashback sequence where we learn why Matsu is in prison.

Of course, being a ‘women in prison’ movie the film is full of gratuitous nudity and violence, so won’t be everyone’s cup of tea, but if you’re a fan of exploitation films and you can stomach it, this is definitely worth watching.