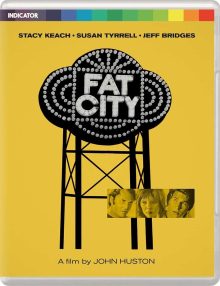 The late John Huston had an unusual career. Making his directorial debut with a cast iron classic, The Maltese Falcon, followed by a handful of other masterpieces, award winners and commercial hits, he then hit the doldrums for a while, making a couple of gems among the rough, but struggling to stay relevant as the 60’s rolled on. 1972’s Fat City was a bit of a comeback though, critically at least, leading to a pretty solid end to his career and life (we can forget about Annie). It’s been rather forgotten over time, but the critical love for Fat City remained enough to prompt this fine re-release package by the up-and-coming UK label, Indicator. Before I dig into Fat City I must take a minute to applaud Powerhouse Films for digging out so many lesser known gems, bravely picking some less than obvious titles to launch the first few months of their Indicator label. They pull out all the stops for special features too. Adding to the wonderful Blu-Rays released by Eureka, Arrow and The Criterion Collection, I’m truly spoilt for classic and cult re-releases these days.

Anyway, back to Fat City. Tully (Stacy Keach) is a former boxer who had a chance to make it big, but fell apart due to personal problems (he blames a woman and his manager, but as the film goes on we realise he’s got a drinking problem). When heading back to the gym in an attempt to get back into the sport, he comes across young Ernie (Jeff Bridges) training there for a bit of fun. Seeing potential in the 18 year old, Tully recommends Ernie speak to his ex-manager Ruben (Nicholas Colasanto – better known to me as Coach from Cheers). The film then charts, largely separately, Tully’s attempts to get back in the ring whilst battling personal demons and Ernie’s development as a boxer in the rough ‘skid row’ of Stockton, California. As both struggle to find the level of success Tully in particular dreams about, their lives intertwine with two women – Tully’s with alcoholic Oma (Susan Tyrrell) and Ernie’s with teenager Faye (Candy Clark). 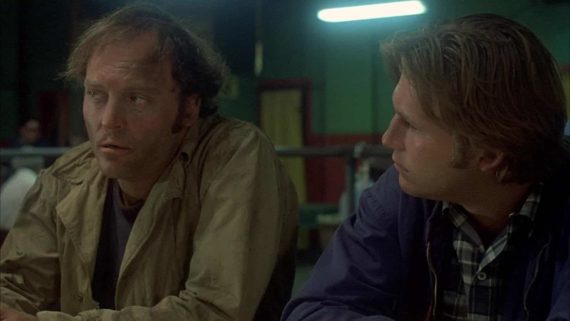 Before you all yawn and say you’ve seen it all before, I can confidently say Fat City sidesteps or rather knocks out the typical boxing movie cliches. The Rocky films in particular have provided a template for the boxing move that audiences expect others to follow. People often like to point out that the first Rocky movie is a grittier, more believable film than its sequels, but they clearly haven’t seen Fat City. There are no inspirational montages, no rags-to-riches glory and no sentimental love story at the centre of it. Less about boxing than the gut punches life can deliver, it’s a bleak film, even by 70’s standards. This isn’t the glamorous world of heavyweight title fights, but the grim reality of slugging it out at the bottom rungs, with vain hopes of becoming a champion. The phrase ‘fat city’ means making it big, but it’s used ironically in the film’s title.

This realism is something the 70’s era of cinema is known for and Fat City delivers that in spades. I’m a great lover of 70’s films and the inherent naturalism is one key reason for this. I do love the escapism cinema can deliver in more fantastic or stylish films, but there’s something about the loose, believable saunter of 70’s cinema that I can’t get enough of.

Saying that, the rambling nature of the film and lack of strong narrative drive mean this isn’t the most gripping watch in the world. The way Ernie disappears from the film for a while before drifting back in for the final quarter bothered me a little too. You need a little patience to make the best of the film though. Not that it’s dull, but you need to think and let the film soak in afterwards to fully appreciate it.

The strength of the characters is what drives the film. These feel like real, largely broken or at least deeply flawed people. They are all performed wonderfully too. Keach is fantastic in particular. He’s enjoyed an incredibly prolific career since this, one of his earliest feature film roles. However he’s usually a sideman or bit player, so it’s great to see him take centre stage and do it so brilliantly. It’s kind of sad that he hasn’t been the lead more often though. Tyrrell is particularly memorable too, delivering one of the finest drunk performances I’ve ever seen. She perfectly portrays the split-personality inherent in alcoholics, rather than merely stumbling around and slurring words. 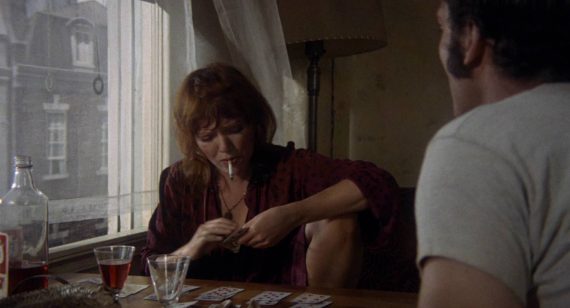 The film looks gorgeous too. Using largely very low key lighting which almost got him sacked, the great DOP Conrad Hall manages to create images that at once look grimly natural yet strangely beautiful. The fight scenes are finely shot too and aren’t overly edited, creating bouts that don’t feel faked.

Fat City is far from the audience-pleasing blue-collar heroics of Rocky, but all the better for it. It’s a fine example of what made Hollywood films in the 70’s so revered. Naturalistic, mature and open-ended, it’s not the easiest watch, but if you give it the time and attention it deserves it will deliver in spades.

Fat City has been re-released by Powerhouse Films on Dual Format Blu-Ray & DVD as part of their new Indicator label in the UK. I saw the Blu-Ray version and the picture and sound quality are both excellent. The picture is has a wonderfully natural grain to it and rich tones.

Coming in at just under an hour, the documentary is more in depth than your usual ‘making of’. It’s packed with memories and anecdotes about the whole production process, as well as the film’s reception. The commentary is excellent too, rich with insight and devoid of dead patches. Powerhouse seem to be knocking it out of the park every time with their commentaries (or the US Twilight Time ones they largely use – Indicator seem to be a UK version of that label) and their packages in general.