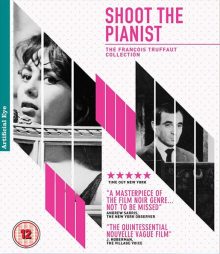 I’ve just enjoyed a month and a half review hiatus, but now I’m back and to kick things off I ventured back into the world of the French New Wave, which I’ve had a shaky relationship with over the years. I’ve talked about it before in my review of Le Beau Serge and Les Cousins so I won’t repeat myself, but basically I haven’t often enjoyed the (relatively few) New Wave titles I’ve seen. Although I appreciate and enjoy many of the principles of the style, I find their tendency to vocally philosophise quite tiresome and often struggle to engage with the films emotionally. The last New Wave film I watched prior to this was François Truffaut’s highly regarded Jules et Jim and I didn’t enjoy it at all, so was a little worried about approaching Shoot the Pianist. However, I’d seen it before a long time ago and although I couldn’t remember much about it, I couldn’t remember disliking it, so there was hope.

Shoot the Pianist (a.k.a. Shoot the Piano Player or Tirez sur le pianiste) was only Truffaut’s second feature, coming after the critically praised trailblazer of the New Wave movement, The 400 Blows. Supposedly he was worried about the expectations people would have after that, so decided to do something completely different. Taking a novel by American crime writer David Goodis (Dark Passage), Truffaut set out to create his own spin on the noir genre.

Indeed, the opening sequence, set at night, follows a man rushing through the city streets, chased by an unknown assailant. So far, so noir, but the wild, rough, barely exposed handheld camerawork suggests something different to the slick Hollywood conventions. Then, after the man hits his head on a lamppost and falls, a passing gentleman (actually French film director Alex Joffé) helps him up and the two walk calmly away together, discussing the merits of love, marriage and settling down. Hardly Bogart and worryingly close to the wordy philosophising I don’t appreciate from a lot of French films. I needn’t have worried though as the film quickly picks up pace again and never gets too ponderous or slow.

It’s not the most labyrinthine of noir plots though. Basically, it concerns Charlie Kohler (Charles Aznavour) a former virtuoso pianist who is now eking a living playing in a bar. This mild-mannered and glum man likes to keep his head down, but his brothers are regularly in trouble and he helps them out when he must. When two thugs start to lean on Charlie to get to his brother Chico (Albert Rémy), things take a turn for the worse and his life becomes ever more in danger. The situation has its advantages though as it brings him closer to Léna (Marie Dubois), the beautiful barmaid he’s had his eye on for a while. As she comes into his life, we also learn the truth behind his shying from the limelight he once enjoyed.

Well, I can safely say Shoot the Pianist was one of the most positive experiences I’ve had with the French New Wave. It has a wonderfully snappy pace which keeps it entertaining throughout. The film is full of life, with loaded frames, plenty of music and frequent movement from the camera and characters. With Jules et Jim I found the scene to scene pace fast in the same way, but the overall experience very tedious because I didn’t care about any of the characters. Here, the lead character of Charlie is a fascinating one. He can seem a closed book at times with a frequently stony expression, but his melancholic demeanour is endearing considering the crazy situations he gets into. A voiceover which runs throughout helps keep you on his side too as it’s loveably neurotic and often quite funny. The film, in general, is funnier than I expected. Maybe not laugh out loud hilarious, but consistently amusing in a subtle fashion. There’s drama too, in particular in the climax of the flashbacks and the snowy showdown in the country.

My only gripe would be that it did start to get a bit overly talky at times, which would sometimes put a brake on the rapid pace. Featuring a lot of pre-Tarantino irrelevant and irreverent conversations, these are sharp and witty but can feel overdone and drawn out at times (as in much of Tarantino’s work).

All in all though, this is the sort of New Wave film I can get into. It uses the exciting, loose and playful techniques which got the movement noticed in the first place to inject life into a genre many people were tired of at the time. Short and snappy, featuring an interesting lead character and enough of a narrative hook to keep you engaged, this is a fine example of youthful vibrancy being used effectively to bring cinema alive.

Shoot the Pianist is out on Blu-Ray & DVD in the UK on 28th July, released by Artificial Eye. I reviewed the Blu-Ray version and the picture quality is great. The picture is free of damage and the detail is strong without looking sharpened or over-cleaned. The only thing I would say is that it shows the rough approach of the cinematography more than ever, with many shots clearly out of focus for instance. It’s all part of the aesthetic though and looks more like it would on initial release in cinemas. The sound quality was decent too, although it is limited by the source material.

The main extra feature is a commentary with cinematographer Raoul Coutard. I didn’t have time to listen to the whole thing (I usually do so in the background whilst I do other things, but this is subtitled), but what I heard sounded fantastic. Coutard is full of information about the film’s production and an ‘interviewer’ is on hand to keep him talking.

On top of the commentary, there is a very short (3.5 mins) featurette by Serge Toubiana. Cramming in a lot of overviews of ways you can look into the film and Truffaut’s intentions in taking on the project, this may be brief but it gives plenty of food for thought.

There is also a short screen test from Marie Dubois, which I almost didn’t bother watching, but is actually quite interesting. Dubois struggles to follow Truffaut’s instruction to insult him as best she can, so you can’t tell whether the test is going badly or if the director was trying to see her shy and uncomfortable side.