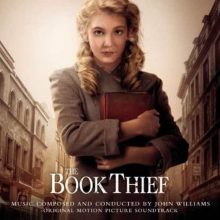 Here is the inspirational soundtrack by celebrated composer John Williams taken from the film The Book Thief. The Book Thief is the poignant film by Brian Percival telling the story of a brave transformational young girl in World War II Germany, based on Markus Zusak’s best-selling novel. Williams has composed many well-known pieces including one of my favourites, the music of Jaws. John has also been responsible for many other wonders including Star Wars, Close Encounters of the Third Kind, Superman, Indiana Jones, E.T., Harry Potter, Jurassic Park and Schindler’s List.

”One Small fact” is the first treat to be experienced as you submerse yourself into this soundtrack, with its soulful piano solo which builds into a robust and emotional piece. “The Journey to Himmel Street” is a beautiful, ghostly piece of music leaving the listener wanting to hear more. “New Parents and a New Home” starts as a piano solo which builds joyfully, before moving on to “Ilsa’s Library” which grows steadily and dreamily. “The Snow Fight” is jovial, lively and playful, instantly transporting the listener into a snow scene. “Learning to Read” has a lilt of sadness encompassed in the slow oboe and “Book Burning” imparts an element of danger with undertones of foreboding. “I Hate Hitler” is a subdued track interspersed with glimmers of light. The track “Max and Liesel” is calming with soft undertones and preludes a more ominous composure titled “The Train Station”. “Revealing the Secret” manages to purvey the feeling of discovering a secret artfully through music. “Foot Race” feels like opening a door into a new world of wonder, “The Visitor at Himmel Street” is portentous with glints of hope and “Learning to Write” is haunting. However “The Departure of Max” emanates sadness, to be lifted by “Jellyfish” with shafts of optimism. “Rescuing the Book” is graceful with building undertones of suspense leading into the mystical “Writing to Mama”. “Max Lives” purveys elated joy before “Rudy is Taken” continues in a sombre vein. We move elegantly towards the culmination of this exceptional arrangement with the peaceful “Finale” and the beautiful, lamented conclusion of “The Book Thief”.

This 22 track work is a fine addition to John Williams’ list of achievements which include 21 Grammy Awards®, seven BAFTA Awards, four Golden Globe® Awards, five Academy Awards, concert works and 48 Academy Award® nominations. This is a soundtrack for any lover of fine music; it is intricate and rewarding, revealing more sensations and marvels with each visit.