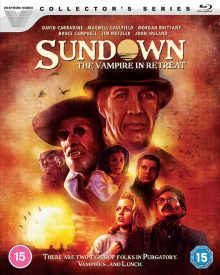 Sundown: The Vampire in Retreat opens with some scrolling text informing us that ancient vampire Count Mardulak (Carradine) has led a breakaway group of vampires into a safe haven, a desert town called Purgatory, where he’s created artificial blood for them to live off and a special cream that acts as ultra-strong sunblock so that his newly-formed clan can walk around during daylight hours; as long as they’re wearing his special sunglasses and thicker clothes.

The film then properly starts with the three bearded Bisby brothers sitting in their shaded swing-seat watching the only road leading into the town. A coked up jerk, whose running late for a camping trip with some mates, crashes into their garage sign and starts demanding some fuel for his jeep. One of the brothers, Mort (M. Emmet Walsh), starts to assist him, but when the newcomer starts making fun of his wide-brimmed sun-hat, Mort decapitates him with one swipe of his right arm! This, rather surprisingly, is witnessed, through binoculars, by the guy’s two friends, who later travel into the town seeking justice for their recently departed buddy.

However, that is just a side story since the main plot sees David Harrison and his family arriving at the town, after being invited by the count to sort out an engineering problem within his synthesised blood-processing plant. Unfortunately, what the count doesn’t realise is that a coup is afoot as some of his ranks, led by Jefferson (John Ireland), have started plotting against him and want to go back to their former blood-sucking ways. Plus, Jefferson’s second in command, the newly turned Shane (Maxwell Caulfield), has told the count about his old friend David, so that he can take back his old flame, David’s wife (Morgan Brittany).

Fortunately for the count, one of David’s small girls has some kind of second sight and dreams of a war between the vampires, enabling the count and his minions to stand a fighting chance to keep Purgatory on the straight and narrow; at least for a while! It all ends with a running battle between the count’s crossbow-wielding followers and Jefferson’s gun-toting army; their guns firing wooden tipped bullets, no less! 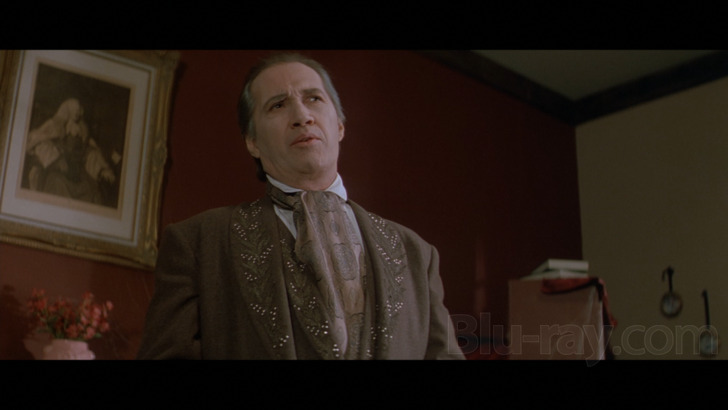 I was one of the lucky few who attended a rare theatrical screening of Sundown in the UK back in 1990 (17th February to be exact) at a Black Sunday film festival event. In fact, I think it was the UK premiere of the film. Unfortunately, I didn’t remember much about it, as it was programmed as one of the middle-of-the-night films of the all-night festival and I was struggling to stay awake by then! For your interest, other films screened at the same festival (Black Sunday II) included: Society, Stepfather II, Salute of the Jugger, Leviathan, A Nightmare on Elm Street Part 5, I Bought a Vampire Motorcycle, Phantom of the Opera (the Robert Englund version) and Jorg Buttgereit’s insane Nekromantik. Ahh, heady days!

Anyway, I finally got hold of a hard-to-find video of the film, on the Vestron label, but video quality is no way to see this beautifully shot widescreen movie. Hence, when the opportunity came up to see this seriously underrated and under-seen film on Blu-ray I snapped up the chance so I could re-evaluate it properly. So, was it worth the wait? 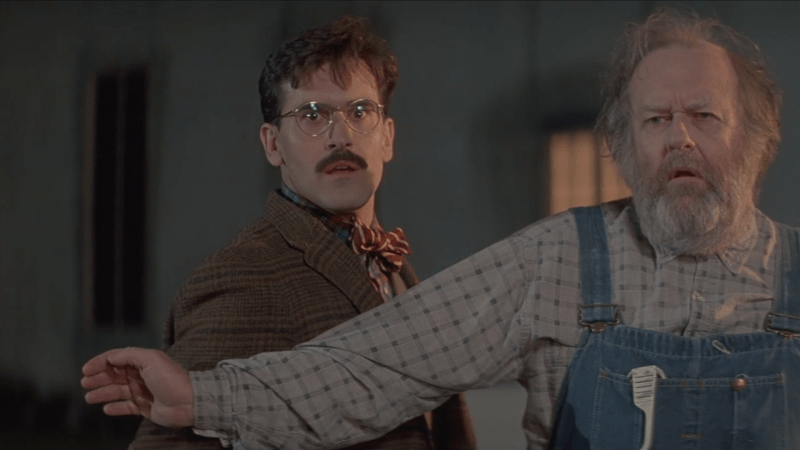 Sundown is a difficult film to review because it’s a weird mish-mash of styles and genres. Firstly, it’s a horror-themed comedy, but it’s also a Western in disguise, although the disguise is a paper-thin one. Heavily influenced by his father, director Douglas Hickox (Theatre of Blood, Brannigan, Zulu Dawn), who apparently loved Westerns, Anthony wanted to showcase some of the Western tropes in Sundown; tropes that he’d grown to love like his dad. Hickox, apparently, did a major re-write of the original script and added much more comedy and Western elements, and beefed up the action quota too.

The comedy elements mostly work, but not in a big laugh-out-loud kinda way, more in an occasional guffaw and painting a smile on one’s face sort of way. The Western themes are stylishly accomplished, helped by the lush cinephotography, but the horror elements are probably the weakest with very few horrific moments and no real scares as such. This is more of a fun family-styled horror film. That’s not to say that it’s a bad film; not at all, but because it struggles to find an identity I think that’s another reason why it’s struggled to find an audience over the years. However, Sundown is never dull, and is very entertaining, and its up-for-it cast look like they’re having a ball, which, ultimately, washes back onto the viewer.

Fans of the likes of Bruce Campbell, David Carradine and M. Emmet Walsh are in for a treat, as all three character actors are given plenty to do and have some fun lines. Plus the Utah-based Monument Valley landscapes have never looked so lovely, courtesy of director of photography Levie Isaacks. And, for a relatively low budgeted film, the movie’s score, by composer Richard Stone, must be one of the best Western-styled scores that few people have ever heard of. It’s really grandiose and epic…

The special effects are sadly a bit dated now, but still work surprisingly well, considering that they had to borrow money from other productions to have some kind of VFX budget! Tony Gardner and his small crew did really well with the little they had, and even the notoriously tricky stop-motion effects just about pass muster. The vampire bat that attacks David’s wife is pretty well done, to be fair.

All in all, Sundown: The Vampire in Retreat is most definitely worth a watch, and needs to be reappraised by film critics and fans alike; it’s long overdue. 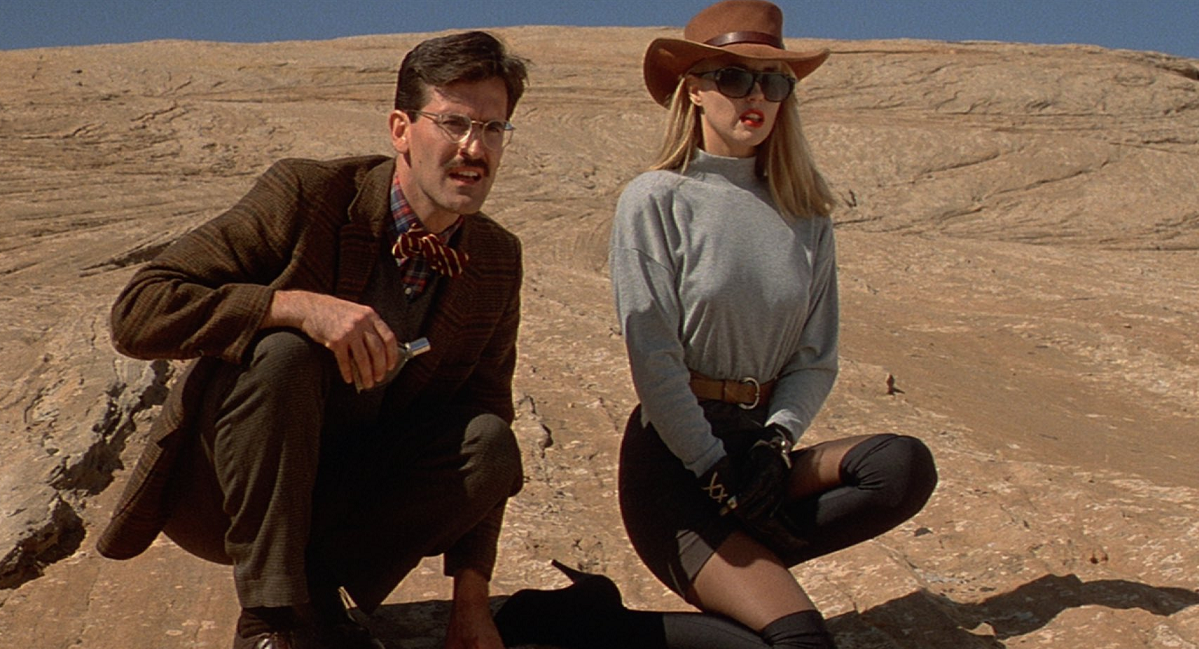 Sundown: The Vampire in Retreat is being distributed by Lionsgate on Blu-ray. There are plenty of extras on the disc including:

Audio commentary with director Anthony Hickox and DoP Levie Isaacks; moderated by Michael Felcher. Despite not having seen the film for 20 years the duo deliver an interesting and information chat track, which at times is laugh-out-loud funny. We discover that the jeep used during the early sequence was the director’s own, that M. Emmet Walsh never smiled once during the whole shoot and that the film’s budget was approximately $2.5 million.

Isolated score selections and audio interviews with music historian Randall Larson and producer Jefferson Richard. Larson proves to be very knowledgeable about the film’s soundtrack and reveals that the composer also did the music for 1988’s Pumpkinhead, and was a fan of Italian composers, in particular. Unfortunately the composer died young, aged 47, but still composed 500 scores.

Weird Wild West (16 mins) – Interview with director Anthony Hickox where he reveals that Sundown is the favourite of his films and that David Carradine was drunk during much of the shoot, but was still great to work with. He also talks about the distribution ‘purgatory’ the film found itself in after production company Vestron went under, not long after the movie was completed.

Bloodsuckers from Purgatory (14.5 mins) –Tony Gardner talks about the visual effects on the film and says that he enjoyed the fact that all the vampires were from different time periods. He also reveals that most of the vampire army in the cave were crew members.

Memories of Moab with Bruce Campbell (13 mins) – Bruce talks about how he got involved with the film (he needed a pay-check as he was trying to raise money for his own The Man with the Screaming Brain project) and how he ended up working only a few days a week so used to go out on lengthy hikes and bike rides to fill the time in between production days. He also recalls getting hot shell cases sprayed in his face during the gunfight by M. Emmet Walsh!

A Vampire Reformed (13 mins) – David Carradine talks about his role in the film and how he enjoyed playing a good version of (spoiler alert) Dracula. He was also proud of himself for managing to do three pages of script in one take, especially given that he was also shooting another film, Future Force, during the day. Maybe being a bit tipsy helped him after all?!

A True Character (11 mins) – M. Emmet Walsh chats about his work on the production. He particularly enjoyed working with John Ireland who had some great one-liners, such as: “There are only two things in the world that are better than a good gun – a watch made in Switzerland or a woman from anywhere!”

Theatrical trailer (1 min) – This uses the tagline – ‘Fight for your right to bite!’

Stills Gallery – 15 minutes worth of various shots from the film, including some behind-the-scenes material. 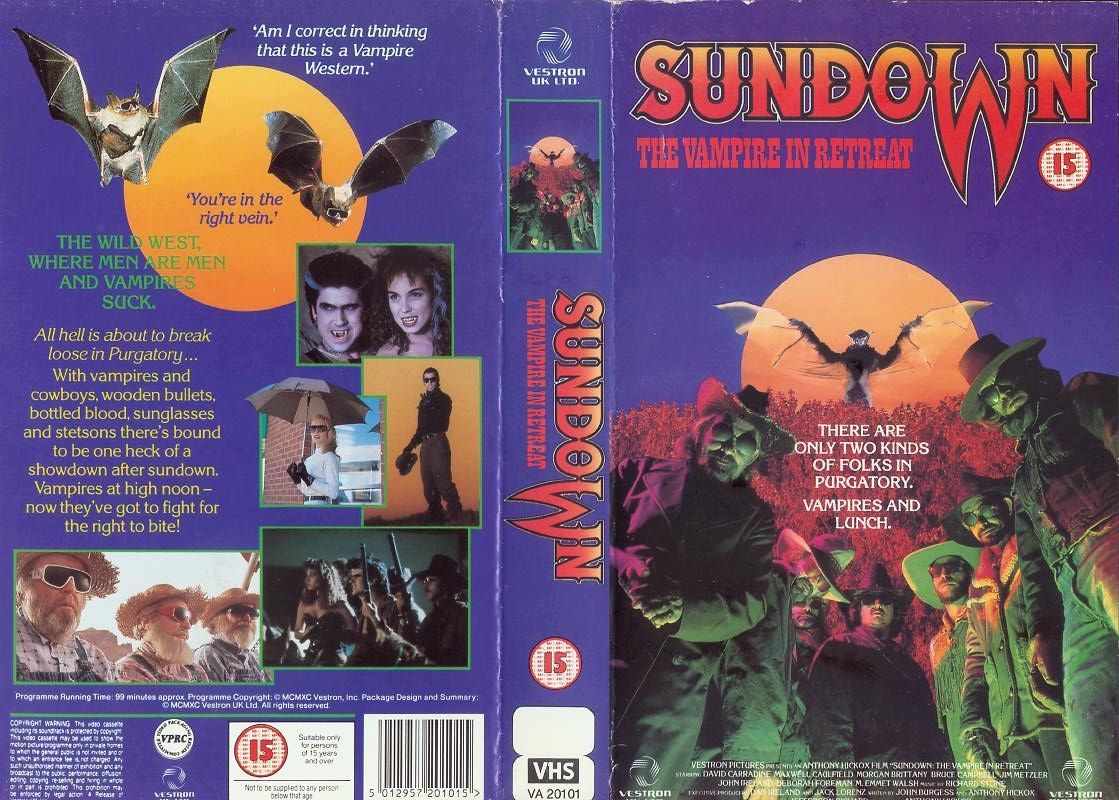