* Editor’s note – PG: Psycho Goreman is being released physically on Blu-ray by Acorn Media International in association with Shudder, so I’m reposting Andrew’s on-point review of the film and adding my own thoughts on the extra features included on the disc 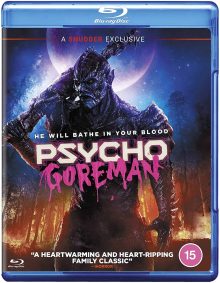 PG: PSYCHO GOREMAN is available to stream on SHUDDER and has also been released physically on Blu-ray by Acorn Media International in association with Shudder.

The Blu-ray looks great with the film’s bold neon splashes coming through nicely. I found the dialogue a bit low in the mix on the audio though, meaning I had to really crank up the volume to hear what was going on. The rest of my family weren’t too happy about that.

There are plenty of special features included on the disc:

Steven Kostanski goes solo on his commentary but never runs out of steam, providing a mountain of behind-the-scenes information about how everything was cobbled together. He tells it all with passion and humour too, so the track is a pleasure to listen to and exactly what you want from a low budget movie commentary.

Kostanski also has a chance to discuss his idea behind the film and the production process in an interview. There’s a little crossover with the commentary, but it’s still a great addition to the set.

Alex Chung discusses the fight choreography in his interview, particularly the inspirations the film makes nods to. Linked to this is a fight scene pre-viz featurette that was better than expected. It’s interesting to see how they planned out the action and how it would be shot, doing a run-through in a gym without the costumes on.

Elsewhere on the disc, you get some wonderful behind-the-scenes footage and interviews from the actual shooting of key action scenes too. It’s great to see how they achieved some of the practical effects and it never ceases to amuse me seeing people in ridiculous monster makeup just hanging around at work.

Blitz//Berlin speak about their work on the soundtrack too. They seem to have been thrilled to work on the throwback score and discuss their approach to different sequences.

The combined cast and crew interview featurette is a little EPK-like for my tastes, but it’s still pretty fun. On top of this, there’s also an amusing, presumably improvised in-character commentary with one of the alien council members.

The separate Adam Brooks interview is fun too and is quirkily presented with a stuffed toy asking the questions.

The piece on the miniature work on the film is great. On top of seeing the guys at work on the impressive models, you get to hear a few secrets on how they got the best look to the shots. I particularly liked learning about the rain and lightning effects they created.

Similarly, you get to see inside the ‘creature shop’ where the masks and such were made. It really helps you appreciate the craft of the special effects artists on films like these. The effects might not look ‘realistic’ in the traditional sense, but they’re incredibly cool and lovable homages to genre favourites from the past.

So, it’s a wonderful package backing up a hugely enjoyable film. Highly recommended.