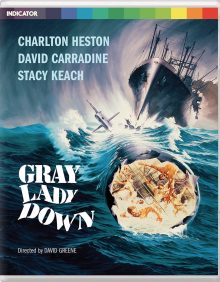 Cult British director David Greene is certainly getting a decent career retrospective of late. Firstly the BFI released his excellent 1969 British crime thriller I Start Counting earlier this year while Indicator themselves released 1970 family drama The People Next Door (which, admittedly, I wasn’t the biggest fan of) a few months ago. Now Indicator are back with yet another Greene film, Gray Lady Down, a 1978 submarine thriller starring Charlton Heston, which is arguably Greene’s most successful and accomplished work.

The plot for Gray Lady Down, in conjunction with the time period in which it was made (along with its leading man) seems to firmly place it within genre of ‘disaster film’, it being a lesser known contemporary of heavy hitters such as The Poseidon Adventure, The Towering Inferno or Earthquake. Its story certainly adheres to a familiar template. A nuclear submarine accidentally collides with a Norwegian freighter in heavy fog, causing it to sink down to the seabed, where it becomes trapped on a precarious shelf that is in danger of collapse. The Navy quickly marshals a response, but will they be able to utilise modern technology such as The Snark submersible and DSRVs (Deep Sea Rescue Vehicles) to save the stricken crew before they plunge into oblivion?

The blurb on Indicator’s website describes Gray Lady Down as the definitive disaster film, yet I feel that this mis-sells the movie, despite the adherence of the plot to genre staples. Yet even Charlton Heston, while on promotional duties, felt that labelling it a disaster movie was incorrect. He preferred to call it a rescue film and I feel that this is a far better indicator (ahem) of the type of film Gray Lady Down is.

Perhaps its biggest flaw, regardless of whether it is defined as a disaster film, rescue film, or even a hybrid of the two, is the occasional lack of tension and jeopardy. As an audience, while we know that the crew’s situation is precarious, Greene never really manages to make it feel truly precarious. Despite being trapped on the sea bed with less than a day and half’s oxygen left, at one point he quite happily shows the submarine crew either relaxing in their cabins nonchalantly playing the flute or gathering together to screen Jaws in a mess room. That might be quite a blunt example, but as the film goes on, and even as the stakes get higher, a palpable sense of threat and danger is poorly established and weakly maintained. There are certainly isolated moments where Greene causes the pulse to quicken (including one horrific scene that matches anything from The Poseidon Adventure or The Towering Inferno) but ultimately Gray Lady Down feels more like a sombre adventure movie than the traumatic, emotionally draining experience evoked by the best disaster films.

Yet the key thing to take away here is that, despite some flaws, Gray Lady Down remains eminently enjoyable. This can largely be attributed in part to its fantastic cast, which occasionally feels like a roll call of 70s American theatre actors. Alongside Heston, Stacy Keach, David Carradine, Ned Beatty, Christopher Reeve (in his first film credit) and Ronny Cox all help to lift the material and turn Gray Lady Down into a robust adventure. Heston, with his career just beginning to wane, is perfect as the staunch sea captain who is nevertheless allowed a few moments of vulnerability and fear (scenes he handles with aplomb) while Keach clashes enjoyably with Carradine’s quietly anti-authoritarian submersible pilot. Reeve, despite this being his first film, displays the commanding screen presence he would use to such great effect in his next movie about an alien who crash lands on Earth…

Disaster films are sometimes defined as much by the conflict between their sprawling cast members as they are by their natural or man made calamities, where human frailties such as arrogance and cowardice clash against nobler aspects such as sacrifice and heroism. There are hardly any such avenues provided to the cast in Gray Lady Down, with most characters being rather dully and thinly sketched. A sense of conflict is forced into a couple of scenes with Ronny Cox, but this never successfully rings true. Yet, as Stacy Keach notes in his interview on the disc, Gray Lady Down isn’t a character study, it is a situation study.

Ultimately it is this aspect of the film that saves it. Just how would you rescue hundreds of crew from a trapped submarine hundreds of feet below the water? Gray Lady Down takes great delight in presenting the answer to that conundrum in painstaking, at times, riveting detail. Greene keeps the plot ticking swiftly along and ensures that the film is never less that consistently entertaining.

The effects work used throughout is also consistently impressive. While a few wires and strings occasionally break the illusion, overall, Greene utilises flooding and gyrating sets to fantastic effect, while the scenes set on the ocean floor, complete with tumbling rocks and crumbling sand, still feel impressive and immersive today. Despite its age, Gray Lady Down still commands an admirable sense of realism, which might not be unexpected, considering the real American Navy had a hand in its making.

Overall then, my sense of Gray Lady Down’s weakness and failures highlight more a sense of misjudged expectation on my part that any real faults with the film itself. As a fan of disaster films, I was expecting something akin to the stalwarts of the genre, where desperate humans attempt to save themselves against the cataclysmic results of our own hubris or from the cold, existential ambivalence of nature. Instead, Gray Lady Down furrows a different, but arguably no less valid, path. It is a thoroughly entertaining adventure and rescue film, boasting a magnificent cast and still impressive practical effects. If you approach the film on those terms, you’ll find lots to like and enjoy.

Gray Lady Down is being released on Blu Ray via Powerhouse Films on their Indicator Label. The picture quality is a bit of a mixed bag throughout. While shots inside of the submarine positively sing with detail, heavy grain and a slight lack of clarity plagues some of the early shots on the foggy sea, as well as numerous underwater shots. This is to be expected from films of this era however, and the encode deals with these problematic scenes admirably. The soundtrack, in its original mono, sounds clear and fine throughout.

The extras are as follows:

Audio Commentary: Peter Tonguette provides a packed commentary for Gray Lady Down, offering everything from interesting production information to an analysis of characters and plot. He also discusses the background of the cast and crew, highlighting the key yet unsung role of the casting director. Overall, this is a pretty decent commentary that offers a great balance of analysis, production information and trivia.

The Guardian Interview with Charlton Heston: Arguably the highlight of the disc, this 75 minute audio interview with Charlton Heston (which plays out over the film) is a delight to listen to. Recorded before Heston shot Gray Lady Down, he recalls his eventful career, including great anecdotes about Orson Wells, William Wyler, Touch of Evil, Ben Hur and Soylent Green. The discussion soon moves onto Heston’s thoughts on directing and the cost of film production. Touching on almost all of his major roles, Heston proves to be a fascinating interviewee who comes across as both charismatic and candid (he quite happily admits that William Wyler was a better director than Anthony Mann) and is more than ready to critique his own performances. An essential listen.

Plumbing the Depths: This is another fascinating extra that entertained me far more than I thought it would. Former Navy officer turned film historian Alan K Rode proves to have a perfect background to be interviewed about Gray Lady Down – for many years, he was in charge of repairing the DSRVs seen in the film. Rode provides an entertaining and informative history of the submarine rescue, while later going to assess how accurate Gray Lady Down is in its depiction of a rescue at sea. Along with the Heston interview, this is an essential extra.

The Changing Tide & Plumbing the Depths: Both Stacy Keach and Stephen McHattie (Keach appearing via a Zoom interview, with McHattie’s interview being audio only) recall their time working on the film. Both provide interesting analysis and recollections, with Keach happily discussing his former cast members while McHattie focuses slightly more on working with director David Greene.

The package is rounded out with an assortment of Trailers, TV and Radio Spots, as well as a production gallery and one of Indicator’s beautiful booklets. This includes a brief but informative essay by film writer Omar Ahmed, separate interviews with Charlton Heston and Ronny Cox (which compliment the on disc interviews wonderfully) an interview with a Navy commander about using military vessels in filmmaking as well as the usual critical responses.