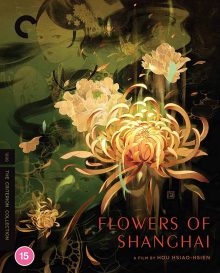 Director Hou Hsiao-Hsien rose to prominence in the 1980s with his “Coming of Age” trilogy (A Summer at Grandpa’s, A Time to Live, A Time to Die, and Dust in the Wind), helping him become one of the key figures in the Taiwanese New Wave movement. The “Taiwanese History” trilogy came a few years later (consisting of A City of Sadness, The Puppetmaster, and Good Men, Good Women), further cementing his reputation with critics and also performing well at the Taiwanese box office.

Hou’s films to this point had largely had fairly contemporary settings, making great use of locations and exteriors. However, with Flowers of Shanghai (a.k.a. Hai shang hua), he made a surprising change of pace.

Based on the 1892 Chinese novel ‘The Sing-Song Girls of Shanghai’, one of the most acclaimed works of nineteenth-century Chinese literature, Flowers of Shanghai is a period piece set entirely in the dark, closed-off interiors of brothels, or ‘flower houses’. It proved to be another critical success for Hou and is often considered to be one of his best films, though he’s made a number of highly acclaimed works, so it’s difficult to judge.

Criterion are adding Flowers of Shanghai to their illustrious collection and, having liked what I’ve seen of Hou’s films so far (admittedly I’ve not seen nearly enough), I requested a copy to review. 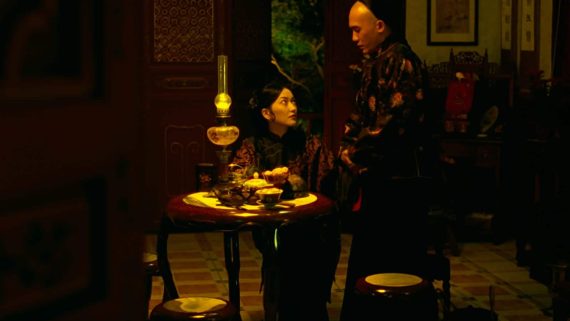 Flowers of Shanghai observes a series of relationships within four high-end flower houses in the titular city, during the late 19th Century. The core story concerns a love triangle between Master Wang (Tony Chiu-Wai Leung), Crimson (Michiko Hada) and Jasmin (Vicky Wei). Wang has been seeing Crimson for a number of years but after refusing to marry her and spending time with Jasmin, Crimson grows jealous and the trio feud over money and each other’s attention.

Another story sees young Master Zhu (Simon Chang) start a relationship with the courtesan Jade (Hsuan Fang). They fall in love but when Jade discovers Zhu is to marry someone else (as arranged by his family) she is furious and plots a disturbing method of making him hers forever.

The final strand of the plot follows the popular courtesan Emerald (Michelle Reis) as she attempts to gain her freedom from servitude as a flower girl. However, her ‘auntie’ (or madam in western terms) makes this difficult, demanding a great sum for her release. Emerald calls upon her long-term patron Luo (Jack Kao) to help negotiate. 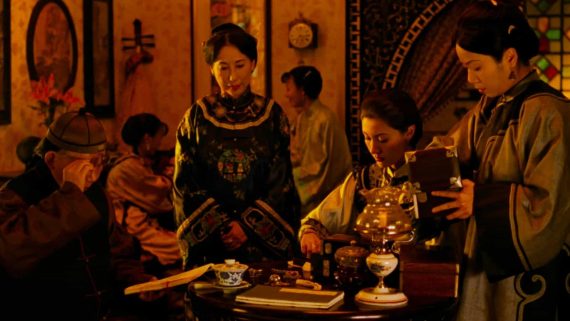 On paper, the stories are fairly straightforward, pared down from the much more complicated novel, which had a large number of characters and narrative threads. However, the way the film plays out makes it quite difficult to follow.

The film consists of 38 long takes, with each shot, for the most part, taking up a whole scene. There’s a fade to black after each shot, making the passage of time unclear between the scenes. Occasionally a shot seems to lead directly on to the next, but elsewhere it could be weeks later.

Hou says he shot the film in this way to make the audience seem like a subjective observer placed within this world. As an observer to these scenes would discover these stories, we jump in at unusual points throughout them, often not seeing key moments ourselves but hearing about them through gossip or their aftermath. 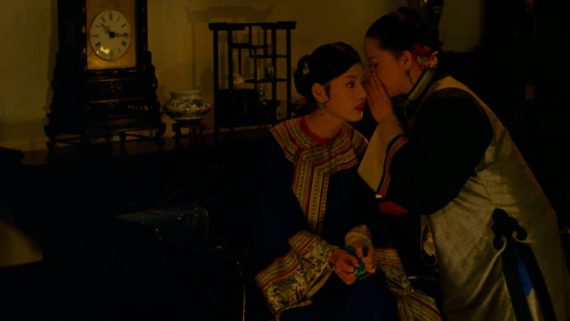 In this sense, the film is very dialogue-heavy and demands your utmost attention to figure out exactly what’s going on. Moving between different houses and sets of characters makes this doubly difficult.

Whilst I appreciated this bold approach, I must admit, it made it harder for me to warm to the film in just a single viewing. Watching the special features already made me better appreciate what Hou had achieved though, so I imagine a second viewing of the film would raise it much higher in my estimations.

Hou’s approach to shooting did, however, also create a distinct visual style, that I fell in love with instantly. The long takes have subtle, graceful movement, gliding between characters naturally as though we were there ourselves. 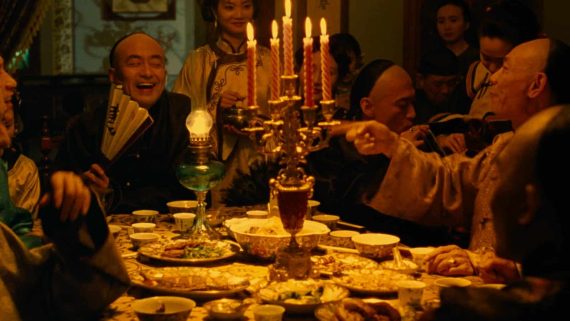 The scenes are lit very minimally too. The crew originally started shooting with more standard, bright lighting but, after shooting a scene or two, Hou wasn’t happy with the results and they decided to keep it a lot darker and seemingly lit completely by the oil lamps (though in reality, some small lights were used). Hou called the lamplight a “greasy” light, that softens edges and deepens colours (which is likely why I had some issues with the picture quality on the disc – see below).

This lighting style, along with the floating camera and quiet, conversational nature of the film, creates a languid, hazy atmosphere befitting the flower houses, where clients would spend their evenings indulging themselves in food, drink, women and opium. There are also very few moments of high drama, other than one notable exception, and the score is used as an ambient backing to scenes, helping it all play out like a languorous opium dream, whilst simultaneously feeling more natural in avoiding melodrama or exaggeration.

Beyond the style and approach, I found the subject matter fascinating. The flower houses, at least how they’re displayed here, were not necessarily ‘brothels’ in the traditional sense. Sex doesn’t play much of a part in the film. The relationships between flower girls and their patrons are more like marriages and courtships, despite them being between men and their ‘hired’ women. Because marriages were arranged back then, sometimes when still children, men would use the flower houses to experience genuine love. It gives a fascinating spin on the idea of what the role of prostitutes might have been back then. 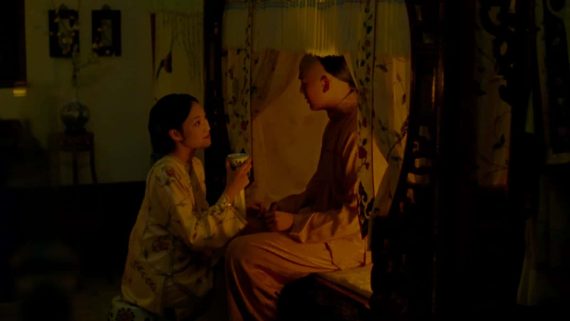 There’s also an interesting dynamic between classes and hierarchies within the film. The flower girls themselves are basically slaves who are regularly beaten and treated as commodities by their ‘aunties’, and whose freedom is negotiated as a business transaction. However, these women also seem to have a lot of power over the men, manipulating them through tantrums and demands, as well as being lavished with beautiful clothes and jewellery from their lovers. Ultimately, the men have the ability to cut the women off though. You have other levels of power within these groups too, with the young ‘trainee’ flower girls and the varying statuses/influences of the men.

Overall then, Flowers of Shanghai is quite a challenging film made up of a web of characters and narratives weaved through a series of casual conversations. The presentation is spellbinding though and it takes a fascinating look at an opulent world where rich men pay to find love and it’s uncertain who wields the most power in these unusual relationships.

It’s a film I didn’t warm to as much as I’d hoped whilst watching it, but I still found myself drawn into its depths, despite getting a little lost in them. However, through watching the special features on the disc and collating my thoughts to write this review, I’m already re-assessing it and I’m keen to see the film again. 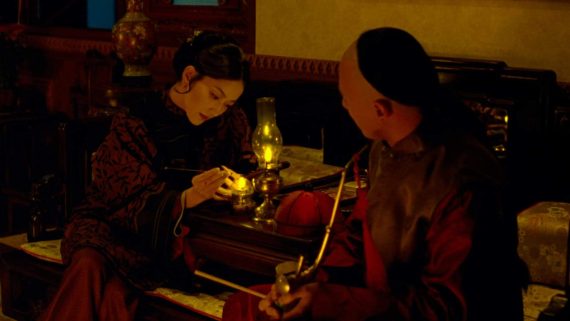 Flowers of Shanghai is out on 14th June on Blu-Ray in the UK, released by The Criterion Collection. I realise the nature of the way the film was lit makes it a tough transfer but I wasn’t convinced by the picture quality on the disc. The blacks are very heavy which loses a lot of detail in the dark areas (of which there are many). I found some of the brighter patches, with the yellow glow of the lanterns, lacked a little detail too. I couldn’t detect much grain so wondered if there was some DNR on there. It’s unlikely that is the case, coming from Criterion, but there was a bit of an unnatural look to skin tones in places. This might be due to the yellow-green glow of the lanterns though. The images used in this review are from the Criterion site and look like they’re taken from the print, so should give you an idea of how the film looks.

Audio is largely strong, other than a brief patch of dialogue towards the end that had some harsh ‘s’ sounds.

Tony Rayns’ introduction is required viewing. As well as placing the film within the context of the director’s filmography, he gives a potted description of the film’s main storylines, which is handy. He also discusses the film’s unique style.

The interview with Hsiao-Hsien Hou provides a description of how the film came about. He also discusses his decision to shoot it in the way he did, as well as giving thoughts on the key work in his lengthy career.

The ‘Beautified Realism’ piece is excellent. It contains plenty of footage, not only of the shoot, but of location recces (originally the film was to have some exterior shots), trips to buy genuine period props, the post-production process and other explanations of how the film was devised and made. It provides a fascinating, in-depth glimpse into the production process.

So, whilst the volume of extra features might not be as extensive as some releases, the quality is exceptional, making this a recommended purchase.