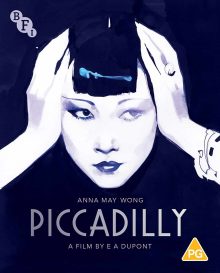 British International Pictures were an ambitious production company that wanted to make films to rival the respected work coming out of Germany and Hollywood. So they hired in a number of big international names to make something special out of their next production, Piccadilly.

They first approached Ewald André Dupont as its director. Despite the French-sounding name, he was German and had made two previous films with similarly glamorous settings, Varieté (1925), based in the circus and music halls of Berlin, and Moulin Rouge (1928) for BIP.

BIP’s manager, JA Thorpe, then went with Dupont to commission Arnold Bennett, an acclaimed novelist, to write the story and screenplay. They wanted an original script, not an adaptation of a play or novel, as BIP believed this made for a better and more desirable film. 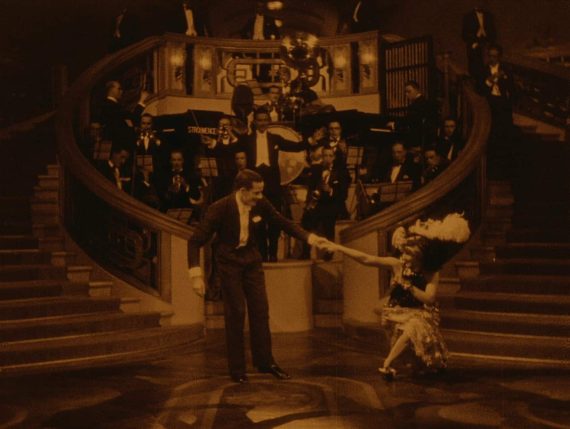 On top of the director and writer, there were some other very talented contributors hired behind the scenes, such as the DOP (Werner Brandes) and art director (Alfred Junge). No expense was spared on the production either, constructing a huge, lavish ballroom set for a couple of key scenes.

It’s hard to find records to say for sure how financially successful the film was, but its critical reception was largely lukewarm, with writers often praising the style and technical aspects but remaining unimpressed by everything else.

Over time, however, Piccadilly has grown in stature and is now considered a final hurrah for the silent era of British cinema.

The BFI certainly believe it’s worthy of attention, as they’re releasing it on Blu-ray with a healthy dose of supplemental material. I put my glad rags on and strode into Piccadilly to see what it had to offer. 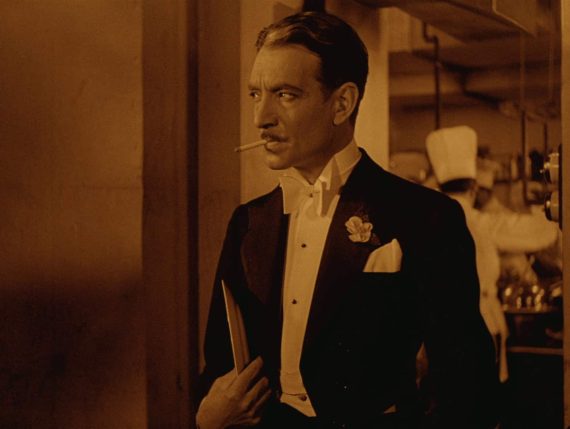 The film opens with a seemingly typical night at the Piccadilly Club, owned and overseen by Valentine Wilmot (Jameson Thomas). The star attraction is the dancing duo, Mabel (Gilda Gray) and Victor (Cyril Ritchard).

However, it soon becomes apparent that there’s a love triangle between Wilmot, Victor and Mabel that causes a fracture in their relationship. That night, Victor quits (though Valentine claims he was about to fire him anyway) and heads to America, but Mabel stays behind.

Though she doesn’t like to admit it, Mabel isn’t as popular without her dancing partner and the club’s success begins to fade. Wilmot doesn’t know what to do, until he remembers seeing a Chinese scullery maid, Shosho (Anna May Wong), causing the rest of the staff to forget their duties whilst they watched her dance. 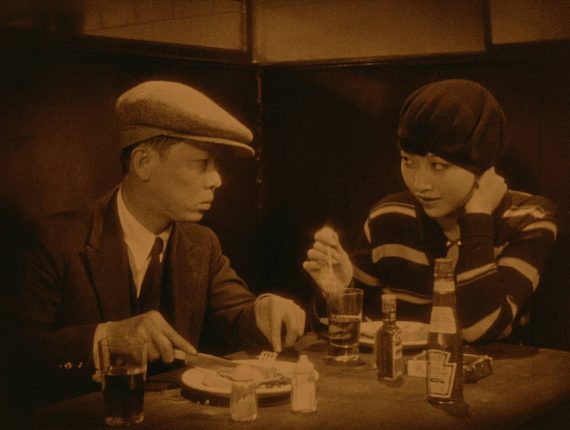 Wilmot pulls the girl out of the Limehouse slums and gives her a shot at becoming the Piccadilly’s latest star. She jumps at the chance and is indeed a success.

This makes Mabel incredibly jealous, particularly after Valentine seems to be falling for Shosho too. So she takes drastic measures to try to win back her man and her fame.

It’s a classic tale of jealousy, desire and fame, so I can appreciate why some critics at the time felt it was a case of style over substance. It’s not the strongest or most original story in the world.

However, Bennett does inject some comments on social standing and race, to give the film a little more depth. The former comes into play with Shosho’s jump from lowly scullery maid to well-paid star and the latter comes not only in her being of Chinese descent, but in a scene that straddles both themes. 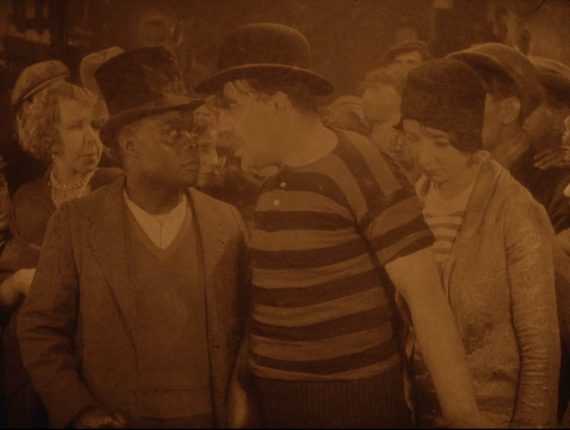 During the blossoming of the romance between Wilmot and Shosho, she takes him to a club in Limehouse, where we witness a more free and wild mirror image of the revelries enjoyed at the Piccadilly. On top of the crowded dancefloor, we see a drunken white woman stumble in and enjoy a dance with a black man. Sadly she’s soon chastised for it and kicked out of the club by its landlord, but not before giving him a piece of her mind. This, and the casting of an actress of Chinese descent (Anna May Wong was Chinese-American) rather than employing the more typical ‘yellow-face’ approach to casting, makes the film rather forward-thinking for the time.

A fine casting choice it was too, as Wong is truly fantastic in the role. On top of her atypical beauty and sensual allure, she has a rich, expressive range. Jameson Thomas is understated but effectively suave as the male lead too. King Ho Chang, who plays Shosho’s boyfriend, is equally strong. He reportedly wasn’t a professional actor but delivers a nuanced and believable performance. Gilda Gray, who receives top billing, is probably the weakest performer of the lot, hamming it up in comparison to her more natural co-stars, though her style befits the role. 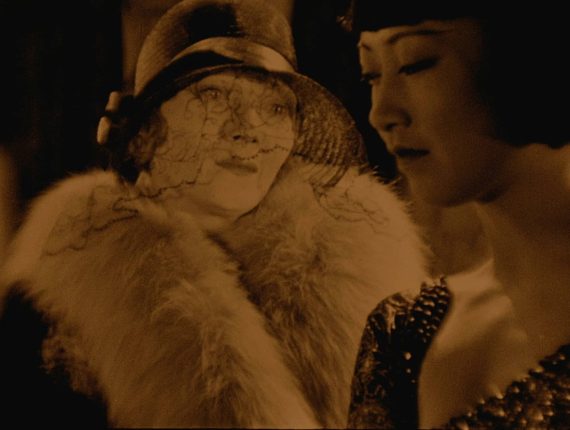 The supporting cast often play it big too, but enjoyably so, creating a wealth of memorable side characters. These include a relatively young Charles Laughton in an early role as a slovenly diner who complains about a dirty plate, leading Wilmot to catch his first glimpse of Shosho.

However, as good as the cast are and as much I appreciated the hints of depth to the otherwise generic story, it was the style that impressed me most.

Most impactful is the first act. The introduction to the club and those that work there is stunningly presented. Energy levels are phenomenally high with Brandes’ camera rarely still (other than the shots of the aforementioned ‘dirty plate’ character) and extras filling each frame with activity. The editing is fast-paced too and some clever match-cuts and daring near-fourth-wall-breaking moments keep things ebullient throughout the opening scenes. 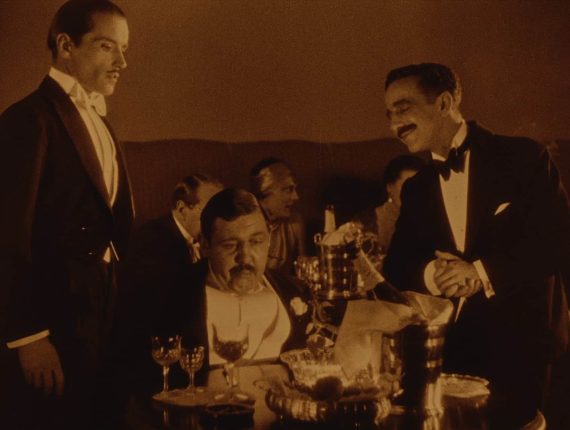 The pace and energy do dwindle as the film moves on, but there’s still room for plenty of stylish sequences, with Dupont making good use of veils and shadows that give the film a noirish look to mirror its noirish content. There’s a wonderful sense of location and atmosphere throughout, be it the sumptuous surroundings of the Piccadilly or the grimy but vibrant Limehouse club, you always get a strong tactile feel for where you are.

Overall then, Piccadilly is a dynamically directed treat with a great sense of setting, character and atmosphere. The melodramatic plot feels a touch drawn out after a breathless opening half-hour but, overall, it’s an impressive example of the joys of silent cinema. 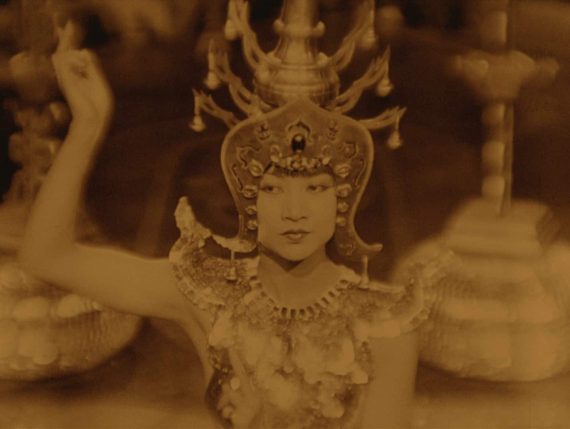 Piccadilly will be released on 21st June on Blu-Ray, released by the BFI. Considering the age of the film, it looks remarkably good. There’s some damage here and there, but nothing all that distracting and otherwise the print is impressively crisp and detailed. The stills used in this review are screengrabs to give you an idea of picture quality. I thoroughly enjoyed Neil Brand’s jazz-influenced score too.

– Remastered by the BFI National Archive and presented in High Definition
– Talk of the Town (2021): an in-depth interview with film critic, author and filmmaker Jasper Sharp on the life and career of Anna May Wong
– Piccadilly: A Video Essay (2021): a newly recorded video essay by BFI curator and silent film expert Bryony Dixon
– Cosmopolitan London (1924, 10 mins)
– Neil Brand on composing for Piccadilly (2004, 20 mins): the acclaimed composer discusses his score for the film
– Prologue from the sound version of the film (5 mins)
– Newly commissioned sleeve art by David Downton
– **FIRST PRESSING ONLY** Fully illustrated booklet with new writing on the film by BFI curator Bryony Dixon and an essay on the core by Neil Brand

Bryony Dixon’s video essay on the film is highly informative, if a little on the short side compared to the other pieces. It’s required viewing to best appreciate the film.

I really enjoyed Neil Brand’s interview about the score too. It provides a detailed look at his approach to composing it, helping tell the story through music.

Jasper Sharp’s piece on Anna May Wong is wonderful too, providing a lengthy history of the actress and her work.

The prologue is also a welcome inclusion. It’s a bit bland in comparison to the film itself and doesn’t add a great deal, but it’s a nice example of the way studios were trying to jump on the ‘talky’ bandwagon at the time.

Cosmopolitan London is a nice little time capsule of early 20th century London. It demonstrates how wonderfully multicultural it already was back then, though the captions are rather insensitive at times.

The booklet is loaded with essays on the film, so also adds a lot to the package and shouldn’t be dismissed.

So, it’s a well-compiled release for a great film and comes highly recommended.