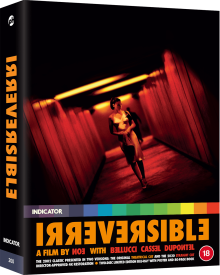 Disorientating, ultra-violent, nihilistic, but captivating, Gasper Noé’s Irréversible has been given a stunning release by Indicator. I remember long ago, not so long after the release catching Irréversible and just sitting there in stunned silence, some 17 years later, that stunned silence returned, you don’t watch Irréversible, you experience it.

Told backwards, Irréversible tells the tale of two men on the hunt for the rapist of their partner and friend, resulting in an unforgettable film. For those who do not know of Irréversible, this is a film that is as purposeful as a film can show the ugly side of this world, be it rape or murder, ugliness and anger come when people are pushed to the unthinkable.

There has always been the argument that Irréversible is just a film to showcase exploitation for exploitation’s sake, but I never saw it that way. I saw it as a lens into the worst of men and what men can do, and it just goes that step further in showing that horrible nature not so well hidden within mankind; only we actually see it. Usually, there these actions are long cut before we see too much. Noé has no intention of looking away; by looking away, we almost make it normal for such actions to take place; by having that camera sit and watch the entire event, it forces us to see the full extent of the worst in us.

We can’t and shouldn’t look away at events like this, and in some films, it glamorises rape as a reason for the victim to get revenge. Here it is those closest to her that wants to get vengeance, again showing how horrible men can be; they can’t just allow the law to get the man, they have to take action themselves, and their relentless pursuit inevitably only ever has one endgame. 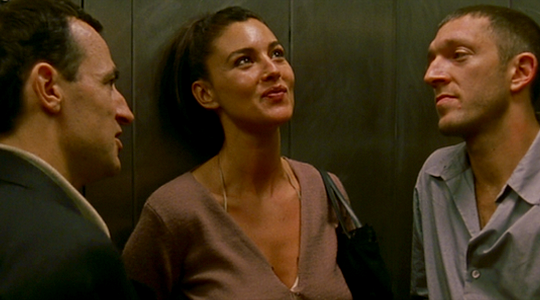 This is an important film, even if you vehemently disagree with how it shows its hand. Does it shock? Certainly so, but that is the intention; we see what we do here because it is that necessary, and for all of the violence and pain, the film, in fact, becomes a tragedy, we see where our trio was at the start of all of this (even if it is our finale) and see the hope and joy they have in their lives and in the future. Yet one incident changes their lives forever, and in this line of narrative, it makes the entire piece all the more effective.

The less said about those remarkable scenes, the better; they are moments that need to be experienced and not spoken about as speaking about them dilutes the intensity of those scenes. Watch them and come back with an opinion on them. But, what stands out most is Noé’s direction; the style that he has placed into his film should be spoken about just as much as the scenes in the movie. That swirling disorientating journey through the club with music that accentuates the disorientation is simply stunning.

He never wants us to settle at any point until the latter half of the film, and even then, it is a struggle as we have now seen the trauma that by the time the far lighter final third comes forth, you are trying to work out what he has in store for us. This nightmare of a film stays with you and, in fact, has stayed with a lot of audiences for close to two decades. Noé makes sure to do the opposite of what we want here; when the camera moves around too much, we want it to focus on what is going on, when he makes it static, we want it to roam, leave this situation. He has his audience question a lot about themselves and others, and if that isn’t what a filmmaker should do, then what is?

Irréversible is a shocking film, but goodness is it a triumph.

Both cuts of Irréversible are 2k restorations. It is such a blessing to have these iterations present; as you may know, Irréversible is not only tonally dark but dark looking. Most of the film was shot at night, and in another version, you miss the details; here, they are vivid and shown to us as they were originally intended to be. The audio is equally great here and allows us to get a better experience than in previous releases.

This is one hell of a list for one film; in fact, I can’t quite remember a set that had so many extras rammed into it. Indicator needs to be thoroughly applauded for the sheer amount of effort it took to compile everything into this tidy release.

Noé is not one to stay quiet for long, and with his commentary, he is non-stop here as he discusses everything he can think of. From breaking down the reasoning behind certain shots, including the lighting and camerawork, everything. He is open to discussing the minutest of details, to the point that you almost wish they had split it into two separate tracks, one discussing the small details and one providing the overview of scenes. Regardless it is a track rife with wonderful titbits, though as expected with such a comprehensive set as this. There are many overlaps between what is said here and what is spoken about elsewhere in the features. However, it wouldn’t be expected that you would watch all in one sitting, so it is not an overly criminal sin.

We delve straight into the 40 odd minute 2019 documentary film that retrospectively looks at the movie with interviews from Gaspar Noé, Monica Bellucci and Vincent Cassel, and some other cast members a bevvy of producers and production team. Most notable is the man who made sure that Irréversible made it to competition in Cannes. This looks at the film’s entire life cycle, from the beginnings of the ideas for the film to its release and furore of criticism and praise that came its way upon its release. Without a doubt, this is the pick from the extra’s here as it becomes a fascinating, detailed look at the movie.

We get a couple of long discussions here, first with Bellucci, Cassel and Noé, with Cassel and Noé doing the lion’s share of the talking from questions at the NFT50 Q&A. We struggle to hear some of the questions, but that is to be expected in an audience Q&A; you aren’t going to get to hear every question because it wasn’t originally intended to be made for a release like this. The better discussion is the 90-minute long interview with Noé conducted by David Cox (another BFI chat). Here we get to listen and learn far more about Noé himself, and it becomes a captivating listen as we discovered his influences when he was just starting his career in short films.

Interestingly there are two versions of the film here, and before now, I can’t quite recall seeing Irréversible in the standard linear order in the Straight Cut. Cut by Noé himself is a take of the film that makes the film work as a standard piece, but due to the way it was originally made, you have to go with that version as your go-to. Which, let’s be honest, is a weird thing to say, right? It shows the truly unique nature of the creation of Irréversible, a film that should not work but does so.

What makes the original cut work is the mystery of what caused that opening scene; as the film unfurls, we get fed the information we need until that scene and then get the stunning shock of seeing everyone’s happy lives beforehand. With the Straight Cut, that mystery is long gone, and we see the rage build and build until we expect a very violent conclusion. As a standard film, it still works well; it just makes the film as unique as it was. It is an interesting conclusion and perhaps one to show to friends or family who cannot grasp the Original Cut.

From here on out, we are given a bevvy of extra’s, be it a rundown of the SFX, digital penis and all. With some before and after to see some of the effects to see what was done to make that opening scene as gruesome as possible. With some music videos, teasers, images and trailers included, we get to the part of the set that is more usual for us to see; there is only one deleted scene of Alex in the hospital.

Included is the absolutely fantastic limited edition 80 page book full of essays and pieces that will fully engross you and cause you to want to look for more written material about the film. The BBFC case study stands out due to their justification of the rating, and it provides a great insight into how specific things and that rape scene were not cut down more. Full of interesting writings, I would recommend giving this a read before you watch, especially if you have seen the film before, as it allows you to gain a little more insight into such a powerful film.

Irréversible sets itself out to upset its audience, whether you are upset at the very opening scene. (male journalists would leave after this scene and long before the rape scene due to how vulgar they thought the film was). Yet there has been nothing made since that can compare to it, Noé made something spectacular and powerful. Indicator has given us a release that cherishes this feat in filmmaking and makes an unforgettable release for an unforgettable film—an essential purchase.