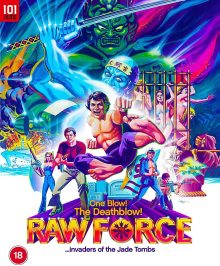 It’s not often I revisit films watched on a Weekend of Trash with a full Blu-ray review. For one, a lot of what we watch is fairly obscure and unlikely to ever get picked up for a decent release, but also they’re not generally finely crafted titles I’m keen to pore over and analyse. However, when I heard 101 Films were releasing Raw Force on Blu-ray, complete with a handful of special features, I couldn’t resist.

Back when I reviewed it on Weekend of Trash XXI I gave Raw Force a whopping 4 ½ stars, calling it “perfect video weekend fodder”. I enjoyed the hell out of it, basically. However, watching a daft action/exploitation movie on VHS with a group of friends late at night with beers in hand during a weekend of trashy binge-watching is not the same as watching a film on Blu-ray at home by myself with a notepad in hand on a Sunday evening. So, though I thoroughly enjoyed Raw Force three years ago when I first saw it, there was a lingering thought in my mind that this rewatch might not live up to expectations. 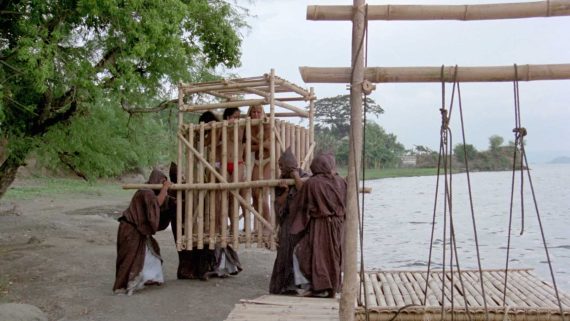 Raw Force tells the preposterous story of a group of members of a Californian karate club who are on a cruise in Southeast Asia. They’re interested in visiting Warriors Island. According to its brochure, the island is a place that great warriors would travel to as they neared the end of their lives, as the monks living there could bring them back from the dead to continue to fight for the rest of eternity.

However, what the tourists don’t know is that the monks are cannibals who eat women to fuel their magic powers. They have an arrangement with a criminal gang who kidnap women and trade them with the monks for bucketsful of pure jade. When the gang find out the Americans are on their way to the island, they attempt to sabotage the cruise.

This is semi-successful, as the boat gets destroyed, but the surviving passengers accidentally drift onto Warrior’s Island on their liferaft. So, they are forced to fight for their lives against both the monks’ zombie warriors and the criminals. 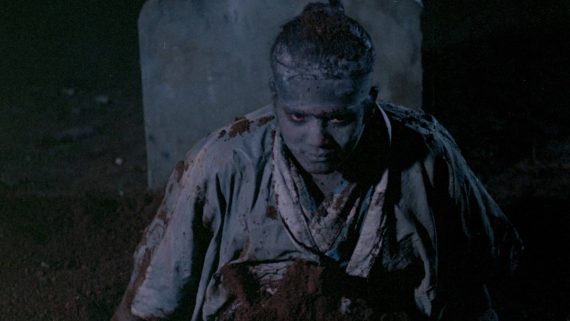 As the synopsis alludes, Raw Force is a bit of a mish-mash of genres. In an attempt to list as many as I can, it’s a martial arts, gunfighting, zombie, cannibal, black magic, sexploitation, women in prison comedy. Some of these are only briefly alluded to, but they’re all present in some form.

Anyone watching it from only one of these perspectives will likely be disappointed, as the action isn’t great (I’ll discuss that later), it certainly isn’t scary, the gore effects aren’t all that impressive and though there’s a lot of nudity, there aren’t any raunchy love scenes to titillate sexploitation fans. However, taken as a whole and wrapped up in a comedic tone that never takes itself seriously, the film is incredibly entertaining. As writer/director Edward Murphy explains in his interview, “the target audience was 17-year-old boys”, and anyone fitting this bracket, in spirit if not in actuality, will be in for a treat.

It’s the comedy that helps tie everything together, as I mentioned earlier. What’s odd about how it works though, is that Murphy is certainly trying to make a funny film (unlike some ‘so bad they’re good’ movies) but it isn’t particularly well-written or performed. So the intentional comedy doesn’t work on the surface, but through its lacklustre attempt to be witty and the sheer volume of puns and wackiness, it becomes funny in a different way. Hopefully that makes sense. 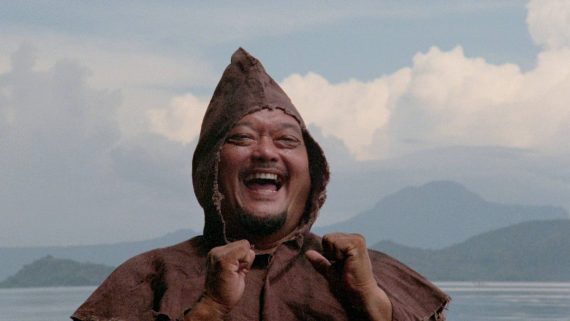 A lot of the more successful humour comes from the background ADR, funnily enough. Perhaps in an attempt to liven up the film during post-production, loads of silly asides are thrown in that are delivered off-camera or at a distance when you can’t see a character talking, making uninteresting shots of groups travelling from A to B much more entertaining. Most notably, there’s a PA system on the cruise ship that regularly makes daft jokes.

The film’s greatest strength, however, is its pace. Though nostalgia often makes you think all trashy B-movies are heaps of fun from start to finish, that’s rarely the case. Made on low-budgets with little time or care, they usually consist of a couple of fun scenes to help make a decent trailer and poster, then are padded out with dreary filler to drag the running time out to 90 minutes.

Raw Force, however, is a film that delivers on its promises. It really does throw in all the kung-fu fighting, explosive gun-toting action, samurai sword-wielding zombies and caged scantily-clad women promised on the eye-opening poster. Plus it does this without grinding the film to a halt with a bunch of poorly-executed, drawn out dialogue scenes, racing along at quite a pace from start to finish. 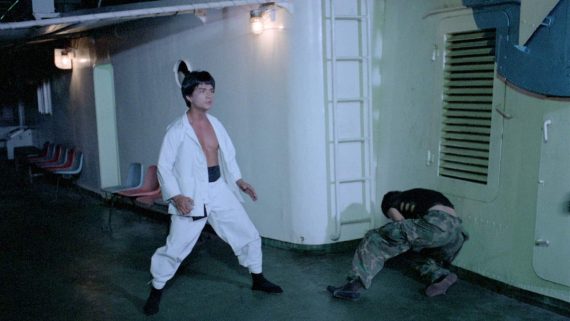 There is one lengthy scene in the middle that has proven divisive among fans of this cult film. There’s a long chunk where the tone shifts more dramatically than usual, where the guys on the ship have a big party and the film becomes a wacky sex comedy. Some believe this stops the film in its tracks, but to be honest I really enjoyed it. It’s a bizarre scene, with some horrendous chat-up techniques and gratuitous nudity, but the outlandish nature of it all really appealed to me.

Also impressing more than it should is the film’s action. Now, Raw Force never comes close to reaching the heights of Hong Kong martial arts movies, but for a low budget American/Filipino production from the early 80s, the fighting isn’t bad. It’s not directed with any skill. You can even see hits aren’t making impact half the time. However, some of the cast seem to be fairly experienced martial artists and show off some pretty impressive moves, particularly Rey Malonzo, who plays an ass-kicking chef.

Speaking of the cast, the tough-guy and gal leads are fairly bland, but there are some fun side-characters and villains. Cameron Mitchell and Hope Holiday (his wife in actuality) provide a lot of loud-mouthed high-jinx, but Ralph Lombardi as the Hitler-moustache-wearing bad guy, complete with twitchy eye, is the standout. His performance is pure ham, but it’s perfect for the film. 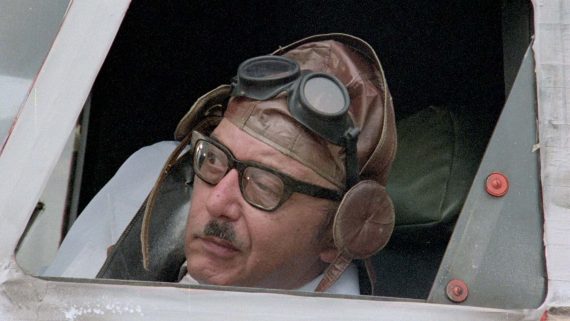 So, it sure as hell ain’t art, but Raw Force is a heck of a lot of fun. Delivering the genre and exploitation goods with minimal padding, it’s a film that knows what its audience wants and gives it to them. The tongue-in-cheek comedic tone holds the nonsense plot together and helps excuse any of the film’s shortcomings in terms of performance and production quality. Your mileage will vary depending on your penchant for goofy, cheap, sleazy action movies, but I loved every minute of it.

Raw Force is out on 8th February on Blu-Ray in the UK, released by 101 Films. Order it here. The picture quality is pretty decent, considering the film’s age and low-budget origins. There’s some damage/dirt in places, the grain is quite heavy and dark scenes suffer from a lack of definition but generally this is a detailed and pleasing print. The stills in this review are screengrabs to give you an indication of the quality. The audio is clear too. It’s certainly a huge step up from the VHS version, which was previously the only way to watch the film in the UK without importing it.

The commentary is very enjoyable, with the contributors very much on the same page as myself on the film. They also impart a few interesting facts about the production, such as how the film’s composer also wrote the theme tune to Family Guy!

The ‘making of’ is very good too. It’s not particularly long and there’s no behind-the-scenes footage but the two interviews are fun and seem fairly honest.

The audio interview is short but interesting. It’s with director Jim Wynorski (Chopping Mall), who was reportedly brought in to work on the final edit of the film by its producers, to tighten it up. The original cut was about 105 mins – “long and tedious” he called it. He said he did the trailer too.

So, a decent package for an incredibly enjoyable film. Get it bought!