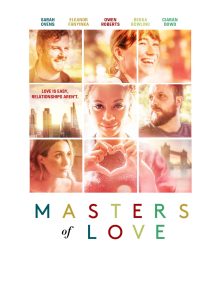 A terrific ensemble cast shine in this well written down to earth rom-com from writer-director Matt Roberts that is surprisingly refreshing in a world with paint by the numbers romantic comedies. Master of Love is an earnest look at the complexities of relationships.

A group of friends are at different stages in their relationships, and none of them is convinced about what they’re doing: Emmy (Sarah Ovens) and Samantha (Eleanor Fanyinka) are due to get married; Josh (Owen Roberts) and Jenifer (Lizzy Watts) are breaking up, and Niall (Ciarán Dowd) is sleeping around. Their entwining stories give a candid look at finding love in the age of internet dating.

While Masters of Love does not reinvent the wheel with its subplots of someone being unsure of their approaching marriage, a singleton who falls for someone but can’t fully pull the trigger with a work colleague and even the cheated upon character trying to get over his previous relationship while also dipping his toes back in the water of dating. There is the chance we have even seen all three of these plots in one film before, but very rarely will you have seen them so well written. 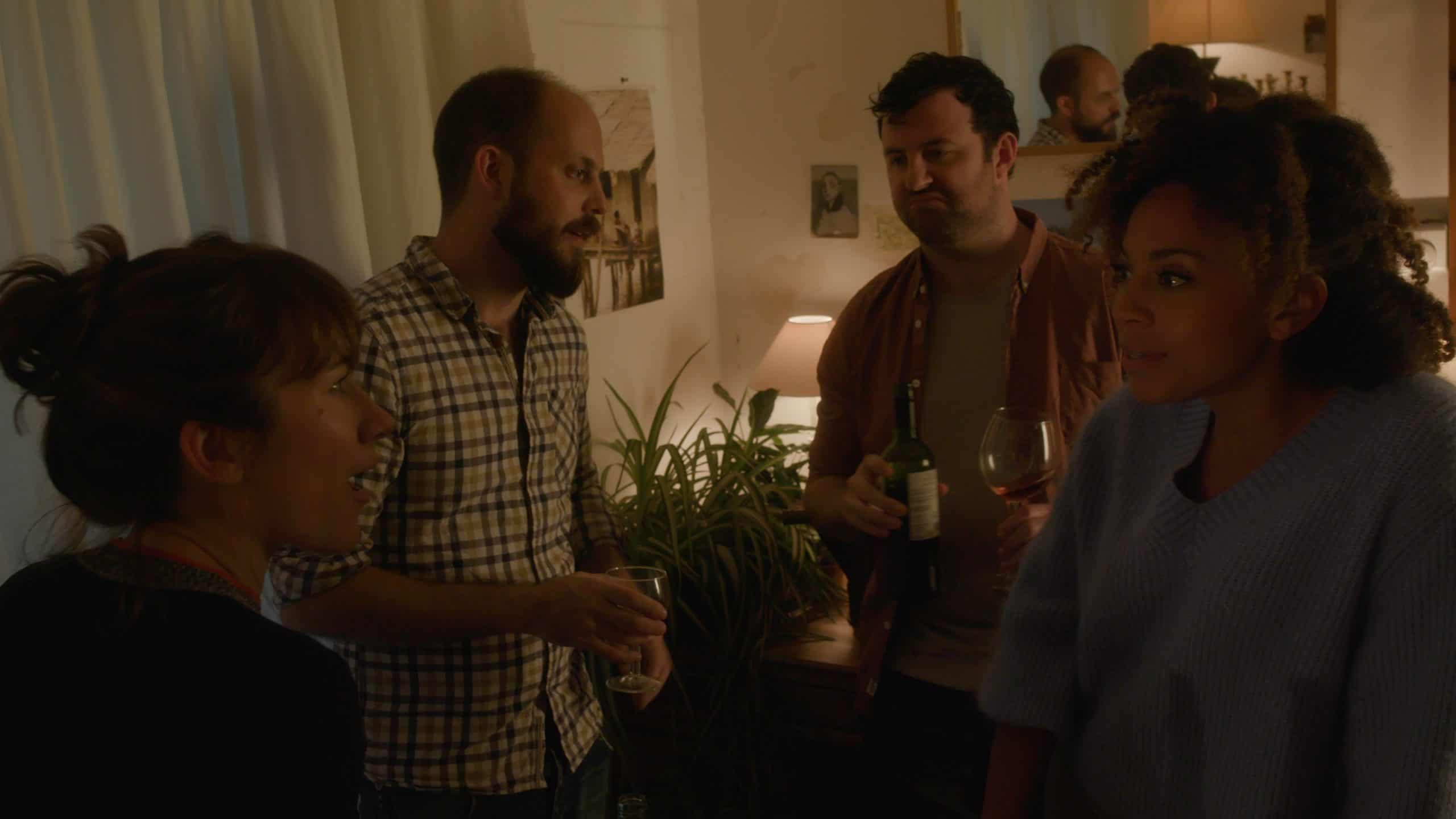 Even when we get to the typical resolution filled third act, Roberts makes sure that not all of our characters get the ending they desire, which keeps the film’s feet firmly on the ground. We can believe that each step these characters take is real. Who doesn’t know a friend who is in a long term relationship and is afraid of that next step as they are just so afraid to “grow up”? Who hasn’t had a situation where you have doubts on a relationship or career and when you try to pour your heart out to a friend or family member only for them to merely focus on their problems, leaving you to ferment in your thoughts? It all feels real and it is truly a triumph of the writing that with every character we encounter that we can relate with them at a fundamental level.

Without a doubt what helps the writing is the pitch-perfect casting of our ensemble. Everyone in the cast shines with their own stand out moments throughout. Each character is written so well, with their own quirks and intricacies that separate them and stop them from being cookie-cutter versions of people we have seen before. Roberts writing succeeds even out of the romantic side of the film with some instances of Emmy, Josh and Niall dealing with their creative jobs being particularly cringe-worthy, but again ringing true. This level of thoughtfulness to the entire scope of the characters plot and story really makes Masters of Love standout and become a real surprise.

The cast also has a superb understanding of their characters with each bringing something different to create this great world-building. The scenes where they are not around each other are great as it shows how each character is not reliant on others to get by unlike other films of its ilk. Owen Roberts Josh reflects this the most as we try to see him push for a TV show on the Food Network while being a decent influencer and struggling with the idea of not including his food blog/influencing in everything in his life. His attempts to hide his emotions behind his work start to fail him by the end of the film as he struggles to keep his online persona going. He is pushing all of his hopes and frustrations into his work as he has become that lost within himself. 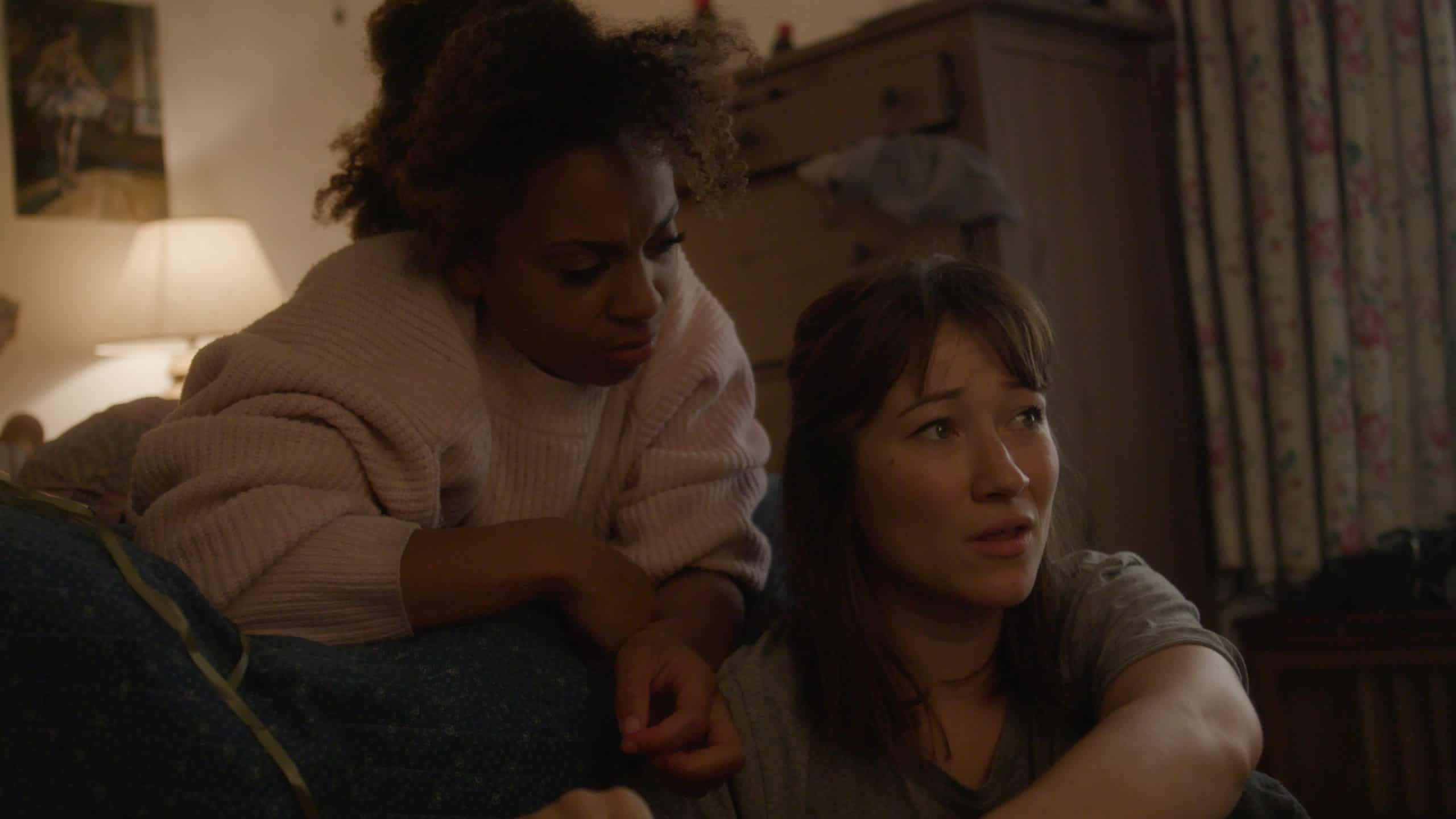 For an ensemble cast that is perfect in their respective roles, the standout is Sarah Ovens’ Emmy. She is very much the heart of the film and her conundrum and spiral in her denial of being able to have the perfect girl and have a Peter Pan style life is riveting to watch transpire throughout the film. We know that when this spiral turns into an explosion of emotions onto the unassuming Sam (the terrific Eleanor Fanyinka) that it cannot end well for the couple. Ovens’ ability to show how distressed she is about her impending nuptials, but also how much she truly loves Sam pulls at your heart. You want her to see sense and to understand that it is time to grow up and to not be afraid of that future.

What also struct was the bold idea to film the scenes as one take, allowing pauses and awkward movements to come into play throughout the film. This heightens the “real” factor of the film and helps immerse the viewer into the world of this group. A prime example of this is Josh’s cringe-inducing meeting with his agency as he walks in and has to sit and endure their lack of care for him.

These long takes work wonders for the film and again surprised me as in other films you would fully expect those cuts to get character reactions on camera. When Emmy drops Josh off at Nialls, we see a look shared between Emmy and Niall to keep her updated on Josh as she is worried about him. There is no second camera to see his reaction, we simply see the back of his head as he nods to her. It is natural and almost makes the camera and the audience a character to the film, it is just wonderful to work from cinematographer Tom Debenham.

Masters of Love is a film that needs to be seen due to its ability to keep its characters level headed and importantly relatable. It is a charming and smart film with a lot to enjoy. Roberts has a lot to say on relationships and isn’t afraid to go where to take the audience on a journey to get there. Most importantly a journey that feels earned by the time the credits roll, it is a film, not one to be missed.

Masters of Love is available on DVD and digital formats from 13th July 2020.