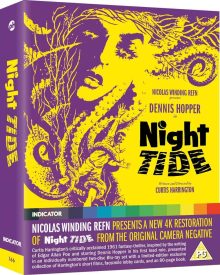 Curtis Harrington lived and breathed films from an early age. He made his first short at 14 (1942’s Fall of the House of Usher, which is included in this set) and followed that up with a number of avant-garde shorts throughout the 40s and 50s whilst working as a film critic, most notably writing a book on Josef von Sternberg. During the 50s he made his way to Hollywood, lending support on numerous productions, including working with fellow avant-garde filmmaker Kenneth Anger. He eventually managed to get a little backing to make his first feature in 1961, Night Tide. Though not as experimental as his shorts, Harrington felt working on a low budget indie horror would at least allow him to express himself without too much interference. Plus he had a love of horror movies, particularly the work of Val Lewton (whose Cat People is a clear influence on Night Tide).

However, Harrington got stuck in the world of B-movie horror for the rest of his career. Tony Rayns in his commentary on this release states Harrington called it a “slippery slope”. So, although Night Tide and a few other titles the director made are considered minor genre classics, it doesn’t sound like he was satisfied with the trajectory his career took after making more challenging films as a youngster. So it’s great to see Indicator are not only releasing Night Tide on Blu-ray in a beautifully remastered print, but are including a disc full of Harrington’s short films, beginning with his aforementioned teenage effort Fall of the House of Usher and fittingly ending with his final short, 2000s Usher, which is a remake of the same Edgar Allan Poe story, only with a much more professional sheen. I’ll briefly run through these shorts at the end of this review, but, for the most part, I’m going to focus on Night Tide. 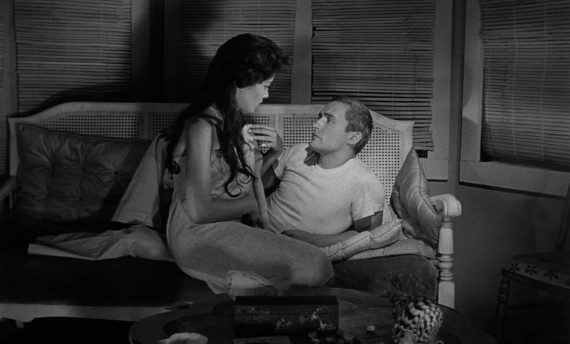 The film stars a young (but still quite experienced) Dennis Hopper as Johnny, a sailor who comes across a beautiful woman named Mora (Linda Lawson) whilst checking out a local nightspot on shore leave. He falls for her badly but she seems a bit reluctant to start a relationship. She soon warms to him, but then everyone else he meets in town tries to tell him to walk away, as her last two boyfriends were found dead. He asks her employer and father-figure Capt. Murdock (Gavin Muir) for more information and he tells Johnny a hard-to-stomach tale about Mora being a real-life mermaid. Johnny doesn’t believe this at first, but as the rumours and mysterious happenings mount, then Mora herself backs up the story, he grows increasingly worried about his safety. His love for Mora keeps him with her though.

The above synopsis makes Night Tide sound like B-movie trash, but other than one naff-looking octopus attack in a dream sequence, the film is actually very restrained, relying on mood over cheap thrills. As such, it may feel slow to some modern palettes but, if you allow it, Harrington’s masterful control of atmosphere will get under your skin and grip you throughout.

Although shot on a very low budget, the film looks great. Harrington utilises strong shadows, a great sense of depth and some elegant camera movement to create the appropriate mood and locations are brilliantly utilised. He was lucky enough to talk the great David Raksin (Laura) into scoring the film too and his jazz-inflected music adds greatly to the ambience. 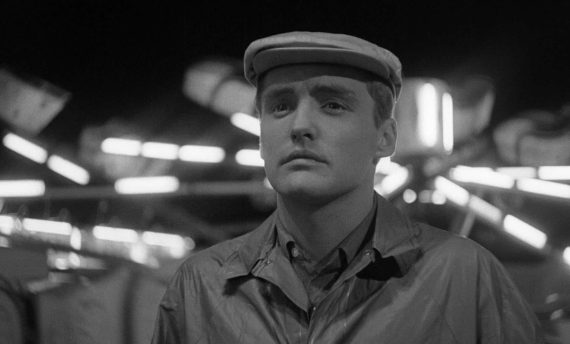 The performances are also surprisingly strong (other than in one or two smaller roles). There’s a slightly off-kilter, vaguely stilted style to some of the acting but, on the whole, it’s very effective. Hopper is particularly good. In his and Harrington’s commentary, the director states that he didn’t know what he was doing with his actors as he hadn’t used any pros in his shorts, so he relied on Hopper’s experience and knowledge to get by. Hopper was one of the Actors Studio performers, who used ‘the method’, and he impresses with his naturalism here. It’s a surprisingly sensitive and innocent performance, given how Hopper grew better known in later years for playing wild or villainous characters.

Overall then, it’s a languid but bewitching horror film that is slow-paced and a tad clunky in places, yet succeeds in building and maintaining an intoxicatingly mysterious atmosphere. It’s finely crafted, considering its budget, with some artful cinematography and strong performances. It won’t be for everyone and shows its age and budget in places, but can put you under its spell, should you let it. 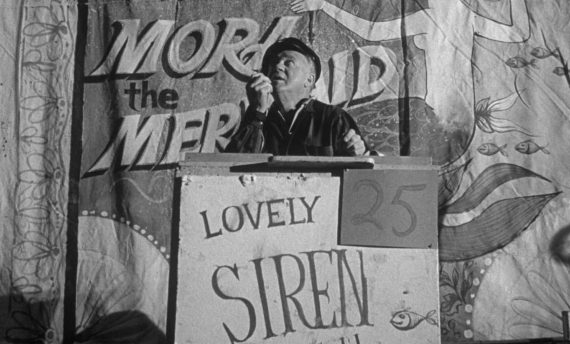 Night Tide is released on 27th January by Powerhouse Films on Blu-Ray as part of their Indicator label in the UK. The picture quality is fantastic on the main film * with a clean and sharp picture and rich details. Audio is solid given the low-tech source material too.

There are plenty of special features spread over 2 discs: 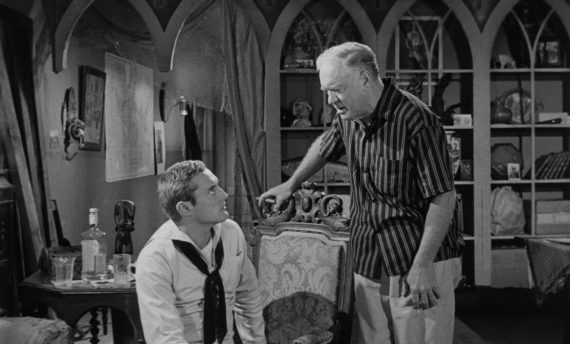 This is a superb set. Harrington and Hopper’s commentary is warm and reflective, looking back at the production fondly. The two interview pieces with the director are also illuminating. I particularly liked the Sinister Image one, which includes clips from more of Harrington’s work. Tony Rayns’ commentary track is excellent too, discussing Harrington’s life and career in fascinating, if often quite melancholic, detail.

The short films are a wonderful addition to the set. The low-budget and experimental nature of much of them means they won’t be to everyone’s tastes and they’re not as wholly satisfying as Night Tide, but they offer a glimpse into Harrington’s skills as a filmmaker. His keen eye for striking visuals is most evident as is his control over atmosphere. Even his teenage debut has its moments, though it’s clearly the least accomplished of the collection. The later two films seem slightly at odds with the rest too, for different reasons. The Four Elements is a documentary about a steel factory, but Harrington still manages to craft some beautiful and unusual imagery. Usher seems quite conventional and has a TV movie look as well as some clunky performances, but it grew on me as it went on, once again maintaining an intoxicating mood.

I haven’t been sent a copy of the booklet to read, but they tend to be indispensable parts of any set Indicator releases. So, all in all, it’s a first-rate release from the label, who continue to impress with their deeply respectful treatment of often neglected classics.