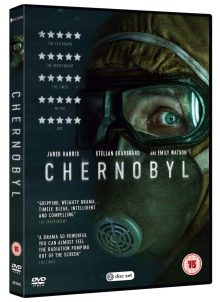 One of the worst nuclear power plant accidents in history could have been an even bigger disaster. That is the message that echoes through the unexpected television event of 2019 – five-part miniseries Chernobyl. It vividly shows how a handful of scientists and Communist Party officials fought an uphill battle against misinformation and propaganda as they were dealing with an explosion at the plant that eventually sent radioactive material across Ukraine, Russia and parts of Western Europe.

Chernobyl starts with a suicide, which sets the tone for the whole of the series. The first two episodes play out like a horror film, complete with haunting score, slowly revealing events that become more and more terrifying as the hours tick by and the true human cost is portrayed in the most visceral manner.

The opening episode takes us inside the control room of Chernobyl Nuclear Power Plant, near the city of Pripyat, when the operators realise that a safety test has gone horribly wrong. There’s a huge explosion, but no-one realises – or more likely refuses to admit to – the extent of the damage. Anatoly Dyatlov (a thoroughly unpleasant character played with glee by Paul Ritter) is the assistant chief engineer of the power plant and insists that it’s a minor accident. Meeting with his superiors, Plant manager Viktor Bryukhanov (Con O’Neill) and chief engineer Nikolai Fomin (Adrian Rawlins), he assures them that everything is under control.

Very quickly a few engineers at the power plant realise the extent of the damage done to the nuclear reactor, but as it is reported to the Kremlin, nobody is prepared to believe that it could have happened. After more than 24 hours, Mikhail Gorbachev is convinced and appoints renowned scientist Valery Legasov (Jared Harris) and deputy chairman Boris Shcherbina (Stellan Skarsgard) to put together a team to oversee the clean-up operation. 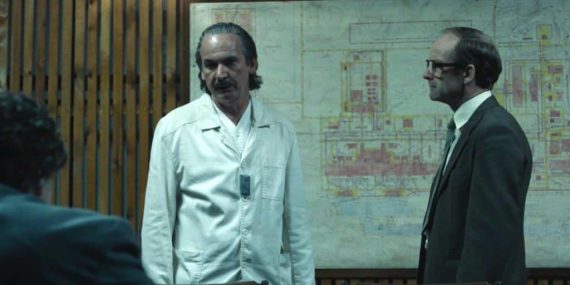 The viewer is not shown the accident itself, but we are thrown into the direct aftermath. Outside of the power plant, the first view of the accident is from the bedroom of Vasily and Lyudmilla Ignatenko in nearby Pripyat. On the horizon the plant can be glimpsed with an eerie shaft of blue light streaming up into the night sky, strongly resembling the arrival Godzilla in the recent movie updates of the Japanese monster franchise (a piece of trivia – the original 1954 Godzilla was made in response to the Second World War nuclear attacks on Hiroshima and Nagasaki and the subsequent fear of the dangers of using nuclear energy).

The assembled cast is top notch, headlined by one of Britain’s greatest actors, Jared Harris, as well as Stellan Skarsgard and Emily Watson. Harris’ Valery Legasov is the closest Chernobyl comes to an antagonist, and it is the development of his relationship with Skarsgard’s Boris Shcherbina that satisfies the most. The dynamic between Harris and Skarsgard is simply outstanding, and Shcherbina’s journey from an arrogant dismissal of the disaster to his growing understanding of it and finally the grim-faced acceptance of his own fate is wonderfully moving. Emily Watson plays Ulyana Khomyuk, a fictional character created to represent the many scientists who worked with Legasov who were silenced and, in some cases, imprisoned for daring to speak out against the State’s official account of the disaster. An actor to watch out for is Jessie Buckley, who’s stoic performance as the wife who endures the pain of watching her husband die slowly in hospital while exposing herself to the radiation is heart wrenching. 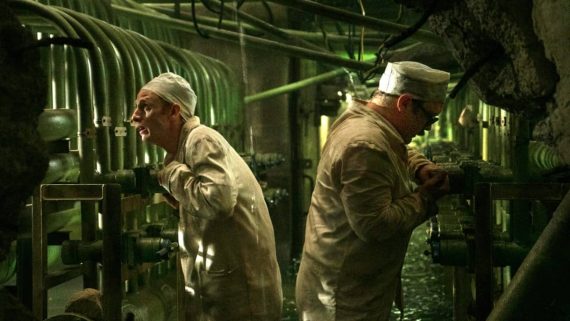 There is a political edge to Chernobyl, showing the arrogance of the Soviet State, lying at every opportunity and keeping those involved in the disaster in fear of speaking out as KGB agents lurk in the shadows. However, it is to screenwriter Craig Mazin’s credit that he manages to balance this perfectly with honouring the victims, as well as the many men and women who sacrificed themselves for the greater good. No better is this represented than in a scene where Legasov asks Mikhail Gorbachev to allow him to select men to enter the nuclear containment area and begin the clean-up by hand. The weight of this request is evident in his eyes, knowing that in a matter of days these men will be eaten away by the radiation and will die unpleasantly.

It is this silent killer that represents the horror of the meltdown. We are subjected to images of the clean-up crew experiencing nauseating burns as they come into contact with radioactive material, and later still we are witness to hospital patients who literally melt away. If you are not a fan of gore, it will be a hard watch.

Chernobyl is a landmark piece of television that works on many levels. It is a docu-drama, a history lesson, a political thriller and a horror story. It may not be the most comfortable viewing, but one I would recommend to all.

Chernobyl is released on DVD and Blu-ray by Acorn Media.