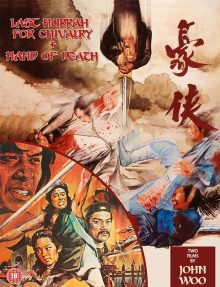 John Woo became an international sensation in 1986 with A Better Tomorrow and later with The Killer and Hard Boiled. These ultra-stylish ‘heroic-bloodshed’ action movies were like nothing that came before and were popular enough to cause Hollywood to come calling. There he enjoyed brief success before things dried up a bit and he went back to Asia to continue working there. To the West, A Better Tomorrow seemed to be the debut of this exciting filmmaker, but in fact he’d been in the film industry since the beginning of the 70s (or late 60s if you count a couple of shorts he made) and had 14 feature director credits to his name already at that point in his career. His early work is not what you’d expect though. You won’t find any sunglasses-wearing modern gangsters in anything he made prior to A Better Tomorrow. He began as an apprentice of the Shaw Brothers legend Chang Cheh (The One-Armed Swordsman, Five Deadly Venoms etc.) and eventually worked as an assistant director on a couple of his films.

Woo moved on to direct his own film at Shaw Brothers, The Young Dragons, but the studio didn’t want to release it as it was deemed excessively violent. Golden Harvest, their famous rival studio, picked it up instead and Woo was signed up to a three-year contract there. His most commercially successful films released in this period before A Better Tomorrow were actually comedies, but he also made a few period martial arts films heavily influenced by his master, Chang Cheh. Among these were Hand of Death and Last Hurrah For Chivalry, which Eureka are releasing on Blu-Ray in the UK. Both films tanked at the Hong Kong box-office, but have been reassessed over the years, as Woo’s reputation has grown. They’re still largely forgotten though in comparison with the director’s golden age directing heroic bloodshed films during the 80s and 90s. I’d seen both before and wasn’t blown away originally, but thought I’d give them another try in this newly restored form.

Hand of Death (a.k.a. Shao Lin men or Strike of Death)

The earliest film of the pair, Hand of Death is a classic tale of revenge set in the Ching Dynasty, which sees Shaolin student Yun Fei (Tao-Liang Tan) sent to kill Shih Shao-Feng (James Tien), who double-crossed the Shaolin school and forced them out of their temple. His initial attempt to get revenge fails, due to Shao-Feng’s strength and that of his 8 Tiger Generals, so Yun Fei enlists the help of some other honourable men who believe in his cause. Among these is Tan Feng (Jackie Chan), a blacksmith and spear expert who crafts the team some new weapons.

It’s pretty by-the-numbers throughout, but I enjoyed Hand of Death more than I remember. As well as being notable as an early action movie directed by John Woo and one of Chan’s first decent roles (one more serious than he’s known for too), it had another martial arts legend working on it, the great Sammo Hung. Not only does he show up in a slightly comical role as Shih Shao-Feng’s chief guard (complete with ridiculous fake teeth), but he was the stunt co-ordinator. His work here is great here too, as you might expect from the talented martial artist and Jackie Chan’s ‘big brother’. The fights occasionally have that staccato rhythm common to kung-fu films of the era, where you can see the timing of each individual move, but they’re still thrilling and nicely varied, even if they’re not quite on a par with some of Hung’s greater work which was yet to come.

Woo hadn’t yet found his voice by this point either, borrowing stylistic touches such as crash zooms from his mentor Chang Cheh, but he crafts a handsome-looking film from what must have been a limited budget. Shot largely in Korea due to a deal Golden Harvest had with the country, there’s a surprising amount of location work that Woo makes the most of. Costumes and production design are colourful too, if a little gaudy.

So this surprised me a little, as I hadn’t thought much of it when I saw it previously, but it’s actually a lot of fun. The plot may be simple and derivative of countless other martial arts movies that preceded it, but there’s plenty of well-staged action and Woo presents it all effectively. He was yet to perfect his signature style, but this shows he could already craft a solid action movie at this early point in his career.

Last Hurrah for Chivalry begins in a similar way to Hand of Death, with Kao Pun’s (Kong Lau) wedding crashed by Pai Chung-Tang, who kills most of his family and takes control of the Kao’s mountain fortress. Pun’s father and master asks him to find the legendary Chan Sang (Pai Wei) to help get revenge and win back their home. So far, so familiar.

However, the film has more than its fair share of surprises up its sleeve. We start to realise Pun is not the valiant hero we might expect in such a tale of revenge, as he manipulates the skilled fighters he meets to get what he wants (including the alcoholic swordsman Ching I, played by Damian Lau, who becomes a close ally to Chan Sang). I won’t give too much away, as the story here is surprisingly good for a Hong Kong martial arts film of the time, but it plays out like an anti-revenge film, which makes a welcome change. Yes, it gets a little silly and contrived at times, but it’s very engaging and helps add drama to the numerous fight scenes.

Speaking of fight scenes, there’s no Sammo Hung this time around, but his replacement (apologies, but I couldn’t find details of who it was) does a fine job of orchestrating a huge number of thrillingly violent battles, mostly involving weaponry. There are some memorable villains too, particularly the sleeping fighter who takes on Chan and Ching towards the end.

Woo is starting to find a style of his own here too. Themes of honour and brotherhood are particularly prevalent, as are Woo’s favoured twists and turns. He stretches out the tension leading up to fights more here too, in the vein of the spaghetti westerns he loves and there’s even some slow motion and the destruction of religious iconography. I couldn’t spot any doves flapping around though.

Action-packed, bloody and filled with treachery among supposed brothers, it’s a terrifically enjoyable kung-fu film that shows early signs of what Woo would become famous for later in his career. It’s certainly a lot better than I remember and comes thoroughly recommended to martial arts movie fans.

Last Hurrah For Chivalry & Hand Of Death: Two Films By John Woo is out now on Blu-Ray in the UK, released by Eureka as part of their Eureka Classics series (surely Woo could squeeze in as a Master of Cinema?). The transfers look fantastic – clean, detailed and sharp yet natural looking. You get a variety of audio options, which cover all the bases.

Eureka must have been paying attention to my review of Once Upon a Time in China when I hoped Mike Leeder and Arne Venema would be brought back for more commentaries on the label’s new wave of martial arts re-releases, as here they are. As before, their two tracks on the pair of films in this set are packed with interesting facts about the productions and careers of those involved. They do go off on several tangents along the way, but it’s all part of the conversational charm of the commentaries. The pair have great chemistry and it’s a pleasure to hear them shoot the proverbial about Hong Kong cinema.

The interviews with Woo are great too, allowing him to mention his (mainly western) influences and feelings on these largely forgotten entries to his filmography. He certainly redeemed himself from my previous experience of him being involved in extra features – I found his Mission: Impossible II commentary rather tedious.

As usual, Eureka’s booklet is a fine addition to the set, providing valuable insight into the genesis of the two films and Woo’s career at the time.