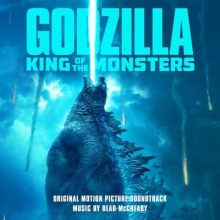 One aspect of McCreary’s score is that he allows each of our titans the chance to shine with their own score and not just a score, their own discernable score. When you hear certain beats, you know that it is Godzilla etc. Other monster scores try to take away from their star creatures, McCreary isn’t afraid of that and in fact, embraces them as he should. He is a composer who knows the history of the characters at play here and the respect he has for said history is evident with every note.

We start off with Godzilla Main Title and happily, McCreary doesn’t try to reinvent the wheel with Godzilla’s theme by Akira Ifukube. Instead, the track is played at a slightly more frenetic pace and allows the brass section to be just the little bit louder. This isn’t your old Godzilla and McCreary wants to let us know this fact right from the start. With the additional chanting vocals combined with the rising brass you know right away that the next 90 minutes will be nothing but joyful. Godzilla Main Title reprises at various points throughout the latter half of the soundtrack and the changes to Godzilla and the story are evident with each alteration. By the last play of his theme, he is fully formed and somehow evolved. Much like this modern Godzilla, the music is bold and confident.

With Rodan, we immediately know that there is danger present with trumpets blowing continuously as if to alert anyone nearby that they should leave and get out of dodge as quickly as possible throughout the five-minute track. High strings only increase the tension and it truly is one of the standout tracks of the album. Throughout the song it honestly feels as if we are being chased by Rodan, there is next to no respite for the listener as Rodan keeps going and going, the trumpets blaring and drums continually pounding their way through whatever it wants.

The Larva begins with as close to a calming influence as we are going to get from a Titan, with the melancholic choir vocals bringing us in. A subtle change occurs however and that is thanks to the strings getting faster and the drums beating a little harder. The vocals alter to become a little more ominous, still drawing in the listener before we are rudely taken out by the harshness of the drums and percussions. If there is an underrated track on this album this is surely it, as it has a bit of everything you could want in a monster track.

The melancholy continues again for Mothra, out of all of the monsters, she is our heart and soul and McCreary has expertly managed to evoke that in Queen of Monsters. Like The Larva, we are in for a slower, quieter start that brings us simple drum beats that represent Mothra. I liked this quite a bit as we do not get to hear Mothra in all her glory until the very end of the soundtrack in Mothra’s Song. The little builds here really make her song stand out, so when the flute comes in, it is almost surprising. No other track sounds remotely like this one and to see how much has been taken from the original is heart-warming. Again McCreary hasn’t tried to reinvent the wheel with some of these characters songs, he has adapted them perfectly. With Mothra’s Song, the only aspect missing is the vocals that are in some older versions and he is able to develop so many layers, that they are not missed. Excellent work.

If you were not aware of the danger of Ghidorah, Ice Breaker makes you aware of his coming and how it is bad for all involved. The strings are heightened and going at a ferocious speed. Unlike Godzilla Main Title, the drum beats are matched with horns to give an extra oomph to proceedings. These beats are far too ominous when the strings keep rising and falling, seemingly unstoppable. Where Ice Breaker ended, Rise of Ghidorah begins, the brass taking centre stage at the start with the choir returning to haunt us. Are we listening to our reckoning coming towards us? It certainly appears as if McCreary intended for us to feel this way. The heavy drum beats keep us on edge throughout danger surrounds Ghidorah and this was perfectly encapsulated in the track.

Where The Larva had melancholic vocals and strings, in Ghidorah’s theme everything is deeper and heavy. The male chanting is not as impactful as it was in The Rise of Ghidorah, but it isn’t meant to be, this is how Ghidorah is normally, not just when he rises around us. These slight differentials are what makes this soundtrack stand out. There is meaning behind the differences in Ghidorah’s normal theme and his Rise. Other scores would coast and allow these snippets to be the same. With McCreary, he changes them to when the story needs it to be changed. If we kept hearing the same style of snippets we would be slightly bored. We do not get that here, we get why the changes have been made as something of note is occurring and it matters. Nothing brings home the notion to an audience that something matters than a score and this score is giving all it can to the film.

McCreary takes no time in meshing both Ghidorah and Godzilla’s themes together in Old Rivals with Ghidorah dominating the early parts of the song before those deep Godzilla horns appear again, but as quickly as they appear the rapid rising strings of Ghidorah comes back. These two Kaiju’s are battling for dominance and this song epitomises that perfectly.

This is a soundtrack that you will replay again and again, in between all of the Kaiju tracks are songs filled with tension, but the track has four main standouts and they are saved for our four monsters who have been given some exceptional music to rule us with. For long-time Kaiju fans, the callbacks will be very pleasing and they will be overwhelmingly satisfied and engrossed throughout this 90 minute plus classic soundtrack.