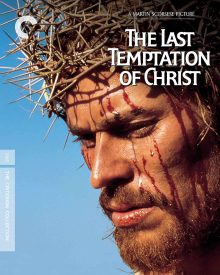 ‘Down with this sort of thing!’ Pretty much the response of many Christian groups on the release of Martin Scorsese’s, 1988 Biblical Epic, The Last Temptation of Christ. Deemed as blasphemous and unholy in its portrayal of Christ, and in this version, he really is (to quote Monty Python’s Life of Brian, 1979) ‘a very naughty boy’, The Last Temptation of Christ is probably one of the best and most realistic versions of Christ’s story. in fact, this version of the Gospel stories adapted from the 1955 novel by Nikos Kazantzakis, is in my opinion much more powerful and thought provoking than traditional bible scripture.

Joking aside, as a human of no fixed religious believe (borderline atheist) it is perhaps easier for me to watch the film and wonder what all the controversy was about. But really? ‘Careful now!’ (sorry couldn’t resist) Have these people even watched the film? If anything, Scorsese’s portrayal of a relatable humanised Jesus struggling with the fears and temptations of the flesh is much more believable than the pure, saintly images of the church. And it is this side of Jesus, portrayed in Paul Schrader’s brilliant screenplay, that makes this film worth watching.

At 2hr and 43 mins, The Last Temptation of Christ is not the easiest of films to get into. The beginning is slow and until you fully immerse yourself into the dreamlike hallucinogenic style narrative, it feels a little pretentious. But this is quite in keeping with Scorsese’s style and he always manages to balance this format, here distracting the audience with breath taking images of desolate, imposing landscapes accompanied by a percussive score by Peter Gabriel. 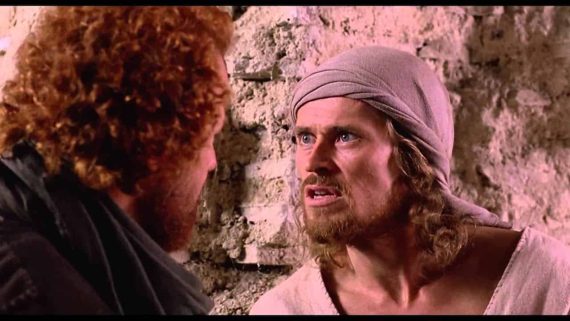 The Last Temptation of Christ, follows the story of Jesus the carpenter, fighting with his human fears, faults and desires against his ultimate calling as Son of God and Messiah. Unable to accept his given path in life, Jesus (Willem Dafoe) is first introduced as a cross maker, working alongside the Romans. After a meeting with Judas (Harvey Keitel) who was sent to kill him as a traitor to the Jews, Jesus is proclaimed ‘The Messiah’ by Judas and forced to follow a path of discovery he does not quite feel worthy of.

Initially Jesus proclaims that the way to win and end all suffering is from within, with love as the central anchor. In an attempt to find his own spirit, Jesus walks forth into the dessert where he seeks to outwit the devil in a scene reminiscent of the final scene in The Devil Rides Out, 1968. This leads Jesus to the temple in Jerusalem where he expels the trading merchants and money changers that inhabit the sacred place of worship. With other images of brutality and greed, torturing his mind, Jesus soon changes his mantra of love, proclaiming he is the ‘God of the Sword’ and that this is the new way forward.

Jesus continues on his journey, performing miracles and gaining followers. With this new-found importance, Jesus starts to question less his calling in life, and embraces his power and influence, his obnoxious arrogance giving even more credence to his humanity. Whist gaining followers, Jesus is also making many enemies and not just from the Romans. 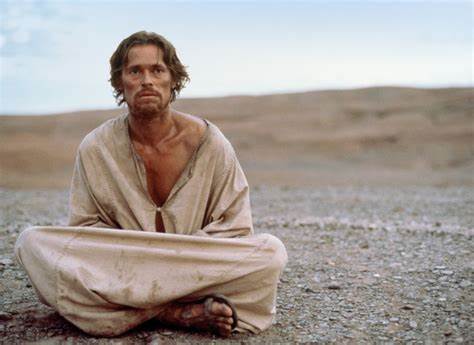 Eventually, Jesus starts to understand his Divine path and expresses his need to die on the cross to purify the sins of human kind. With war imminent, Judas, as Jesus’ closest friend, under order, betrays him to the Romans and so Christ is eventually able to fulfil God’s will as Saviour of mankind.

In most retellings of the Gospel, this is where Jesus dies and is resurrected, resulting in one of the most memorable of the Bibles stories. But not in this film. Whilst in the last stages of death, Jesus is summoned from the cross by a guardian angel who shares God’s new plan to allow him to live as a mortal, giving in to temptation and immersing himself in all his human desires. It is this part of the film that probably caused the most controversy from the Christian community. However, this Christ’s story is not yet over.

After living a full life married first to the prostitute Mary Magdalene (Barbara Hershey) and later to the two sisters of Lazarus, Jesus stumbles upon the apostle Paul, preaching about the subsequent resurrection of Jesus from the tomb. Despite Jesus protesting that this is not what happened, Paul replies that it might not be true, but it is was the people need to hear. 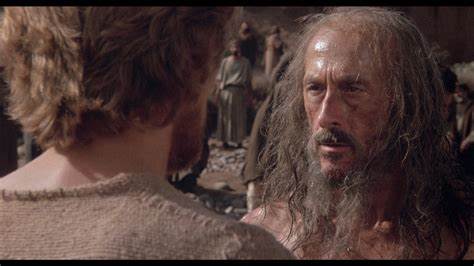 In a final moment of inner conflict, Jesus calls for his former disciples, Peter, Nathaniel and John who tell of the destruction from the Jewish rebellion and Jesus manically claws his way back to Jerusalem. An encounter with his closest friend Judas, reveals that the angel was in fact Satan. This pushes Jesus to question his mortal life, leaving him ready to repent and fulfil his prophecy on the cross as the Saviour, his final words, ‘it is accomplished’.

Whilst Christian followers across the World condemned this movie for its humanisation of Christ, it is precisely this reason that Scorsese’s film stands out. Willem Dafoe’s portrayal of Christ emphasises this humanisation further. He doesn’t play the part as Jesus in a traditional sense, but portrays a man, hounded by voices and visions he doesn’t understand, and which often lead us to wonder about his sanity. The character’s pain and anguish is perfectly depicted by Dafoe and although we don’t necessarily see him as Christ on the cross, we can feel his torment over his life’s conflicts.

Although Dafoe clearly owns this movie, the cast is mostly convincing and Harvey Keitel as Judas, puts on a good performance. It is hard to fully comment on Barbara Hershey’s performance as these were fewer and with less depth of character. I personally would have liked to have seen Scorsese tackle the role of women in Christ’s life further. A surprise cameo by rock legend David Bowie as Pontius Pilate was not all bad, perhaps one of Bowie’s better performances. Let’s face it, despite being an amazingly talented showman and musician, Bowie is not renowned for his acting ability. Other supporting actors, of which there are too many to mention, give reasonable performances overall. 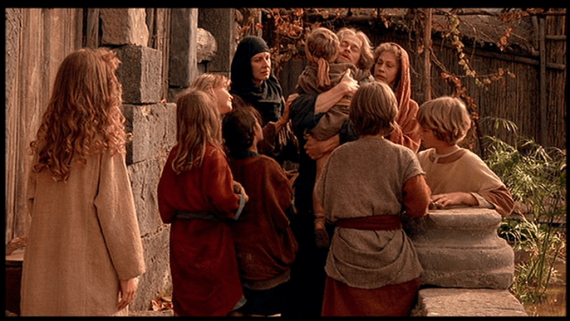 The Last Temptation of Christ is an interesting alternative look at one of the Bibles most famed characters. Whether you believe in the story of Jesus as son of God or not, this film has some interesting and thoughtful questions about life’s struggles with morality. Its humanised version of Christ may offend some viewers but if it does, they have clearly not understood the films bigger story. If you can get past the film’s slower initial pace, it is well worth a watch.

The Last Teptation of Christ is released on Blu-ray by The Criterion Collection and Sony Pictures Home Entertainment with the following director approved special edition features:

* PLEASE NOTE – The stills used here are not indicative of the picture quality of the Blu-Ray.