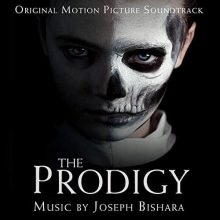 Bishara has made quite the name for himself within the horror genre with his work with James Wan since 2010. A mainstay with the Insidious and The Conjuring franchises, Bishara is a composer who knows his way around a specific type of horror film and with The Prodigy, it is not too surprising to see his talent used here as well.

It is fair to say that The Prodigy soundtrack is not one that is made to listen through completely for a soothing experience. Bishara’s 70’s influenced horror scores tend to give you that uncomfortable feeling. With The Prodigy, Bishara has leaned heavily on the strings to bring us out of any comfortable state we were previously in. He builds the level of apprehension expertly, releasing it when necessary, but never letting it be forgotten. Adding to the tension is a dark orchestral scoring with horns and clarinet that help add to the tension when required. As stated, the whole soundtrack has an old horror movie feel, which is not too much of a surprise considering Bishara’s recent work this past decade.

Unlike a horror film, the score does not lead you into a false sense of safety, there is no cute opening act, oh no. The opening track ‘Journey of Trust’ begins with the tension already there, the drone present but not bashing you over the head enough to make you aware. The melody that plays becomes the main theme of the score and slowly evolves as we delve deeper into the despair of the characters involved.

Where ‘Journey of Trust’ begins somewhat slowly and unthreateningly, ‘Took My Hand’ comes in strong with a sudden sharp drum, the high-pitched strings make themselves known, heightening and heightening the tension, this sets the tone for the rest of the soundtrack, with the sense of dread rarely leaves us as the score progresses. Of course, we get the standard silent dips in sound to then scare or make us alert of the threat. I would advise not to listen to the soundtrack somewhere secluded at night while the wind has started to pick up. Your senses will be too heightened to truly concentrate on anything else.

‘He Couldn’t Wait’, diverts almost completely from the previous opening songs, as we are soothed for having to be jolted so much with the dips in sound and high-pitched jumps. Where it keeps its connection is with the underlying feeling that all is still not well. And for that short 86 seconds we can relax.

The title track ‘The Prodigy’ returns to a sense of calmness that ‘He Couldn’t Wait’ introduced us too. Not knowing where exactly this track plays within the film it could only be assumed that this was playing for the mother, that she still sees good within her son and the soft piano (though the occasional quick key) continues until the end where we understand that this is not going to end pleasantly. It was quite enjoyable to hear that drop as if to warn us of what is to come. Definitely my favourite track on the album due to how it gives you a glimpse of what Bishara can create when it is not just horror.

A Soul Returns is another that tries to bring the listener back down and I can imagine that this would be placed after a terrifying sequence. The song is tender but most certainly feels like a lull to something to come.

Overall, The Prodigy is a mature score from a composer who knew he did not require to use the short sharp bursts of music to scare the listener. He has selected the perfectly dark town to threaten and make us aware of the impending doom coming for these characters. With some horror films, the score can be the highlight of the piece and there is every chance that this is the case. Bishara could have been forgiven if he had just rehashed one of his previous scores for The Prodigy, but in the end as with the majority of his work he has adapted and evolved to produce a haunting score that sets it apart from his previous work.