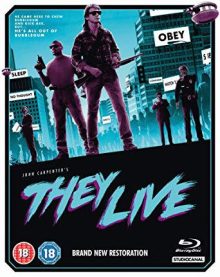 It took me a long time to get round to seriously watching the work of John Carpenter, partially because I was never overly impressed by Halloween, undoubtedly the Carpenter film with the greatest cultural impact and most lasting legacy. Having returned to Halloween more recently and in the context of a Carpenter binge, it’s gone up in my estimations considerably but there are still many more lesser-celebrated films by this fascinating director which I greatly prefer. The tongue-in-cheek horror of Christine, the intense action thriller Assault on Precinct 13, the low-budget sci-fi oddness of Dark Star and the undoubted but initially underappreciated masterpiece The Thing are all go-tos for me before the epoch-making slasher. And then there’s They Live…

I went into They Live not really knowing what to expect. I knew that it was a highly regarded film by some Carpenter fans and yet its cult reputation, the casting of WWF star Roddy Piper in the lead role and the legendary presence of an infamous shoe-horned in fight scene left me not knowing whether to expect a rollicking good time or a ludicrous failed experiment. Fortunately, I unequivocally got the former. They Live is fully aware of its own intentional ridiculousness and uses this humour to deliver a fast-paced, engaging and funny experience that ensures a smile is always plastered on the viewer’s face. It is very much a love-it-or-hate-it kind of film and those who are not inclined to go with outlandish premises and the occasional emphasis on entertainment over credibility will probably be rolling their eyes at a very early stage. It’s perhaps a little too self-aware and broad to really rank alongside Carpenter’s very best work but it’s still one I’d be more inclined to reach for over Halloween. 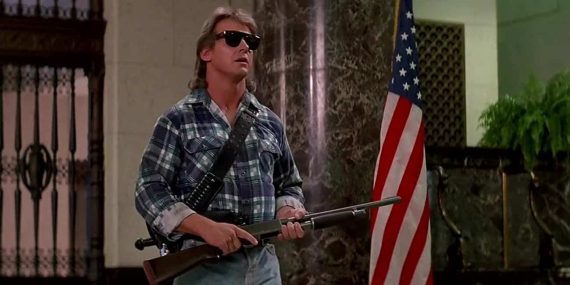 There’s another school of thought on They Live which credits it with a little too much political import. The film’s premise of an integrated alien race living among human beings and subliminally planting conformist propaganda in our heads is too easy a notion to be called genuinely powerful satire. However, the simple, effective treatment the premise is given has ensured that it has remained relevant, with the latest wave of greed-is-good, hate-mongering politics making it the ideal time to re-release the film. Some touches do link the material to the era of Reaganomics that originally inspired it, in particular the brilliant idea to use sunglasses, that emblem of 80s yuppie cool, as a crucial plot point. It is through these symbolic eyepieces that drifter John Nada (Piper) is able to see the hidden reality beneath the façade. The scene in which he dons the glasses for the first time is superb, with Carpenter switching between the world as we see it and a dull, monochrome version in which billboards and magazines insistently push conformist slogans in severe black lettering. The glasses also reveal the secret identities of many citizens to be grotesque but amusing aliens. When Nada’s less than restrained response to this discovery tips off the imposters, a high-stakes fugitive situation begins and Nada must convince his sort-of-friend Frank (the great Keith David, formerly seen in Carpenter’s The Thing) of the unbelievable discovery he has made.

It is to They Live’s advantage that it doesn’t overreach in trying to make a statement about the obnoxiousness of consumerist culture. Carpenter’s point is clear from the moment Nada puts on the sunglasses and rather than try and build on it or offer different perspectives, it is instead used as the catalyst for some goofy fun. The underlying point is important in giving They Live an extra dimension but what really makes it a cult classic is not the social commentary but the well-struck tone between action and comedy. The most infamous scene in the film is the near six minute fight scene between Piper and David which takes place in an alleyway on the slimmest of pretences. It is obviously only there because Carpenter has a professional wrestler in his cast and wants to make the most of it but given They Live’s game approach it fits right into the film despite (or almost because of) its arrival-by-shoehorn. The presence of Piper was obviously going to attract wrestling fans to the film and Carpenter seems to be reasoning Eh, why not give they what they want? Why not indeed?! 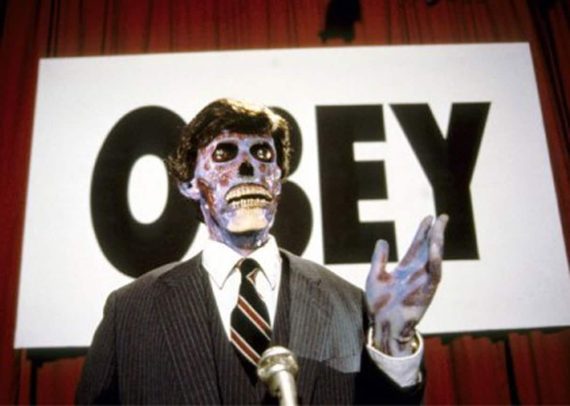 For all its considerable entertainment value, They Live can’t quite sustain itself through its final act as things get more outlandish. It also ends on a frustratingly obnoxious sight gag which aligns the film with the lasciviousness side of that which it aims to criticise. Still, at a slender 94 minutes They Live is astute in recognising its limitations and though it gets a bit baggy in the final scenes, it doesn’t feel like it overstayed its welcome when it ends. For many, They Live represents the last great Carpenter film before he entered his maligned 90s period (although 1994’s In the Mouth of Madness has its champions). While I don’t think it quite matches up to his best work, I’d say They Live is definitely among Carpenter’s most entertaining works. If it sounds like a bit of a mess, it is but sometimes it’s a blast to get a bit messy!

They Live is released on 4K Ultra HD, Blu-ray and DVD by Studiocanal on 28 October 2018. The 4 disc Collector’s Edition includes a poster, 5 artcards, a 48 page booklet and a CD soundtrack album. Special Features on all editions are as follows: