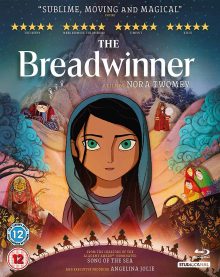 Production company Cartoon Saloon have been quietly making a name for themselves over the past 10 years. They came out of nowhere and turned heads with a surprise Oscar nomination for Best Animated Feature for their debut The Secret of Kells, before doing it again five years later with Song of the Sea. The latter was one of my favourite films of 2015 so I’ve been eagerly awaiting the company’s follow up. It came last year (although not released in the UK until more recently) in the form of The Breadwinner. Once again it picked up a nomination for Best Animated Feature at the Oscars as well as rave reviews pretty much across the board, so I didn’t hesitate to ask for a screener to review it for its home entertainment release.

Moving away from the realm of Irish folklore that Cartoon Saloon and its team (including producer Paul Young and directors Tomm Moore and Nora Twomey, the latter of which directed this) mined to great success in their previous films, The Breadwinner is set in Afghanistan in 2001. We follow a family whose father, Nurullah (Ali Badshah), is a former teacher who lost a leg and now sells trinkets on the street. After speaking up to a young Taliban soldier who offends his youngest daughter Parvana (Saara Chaudry), Nurullah is taken from his home and put in prison. Due to strict Sharia law enforced by the Taliban, women aren’t allowed out in the streets by themselves, let alone work for a living, so Parvana, her mother Fattema (Laara Sadiq), her elder sister Soraya (Shaista Latif) and her infant brother Zaki are stuck with no means of buying food or fetching water. Being quite young, Parvana can get away with a little, but being a girl she still struggles to get served in shops and gets into trouble with soldiers upholding the law in the streets.

Parvana comes up with a solution though. She cuts her hair and pretends to be a boy, adopting the identity of her father’s cousin, Aatish. This allows her to go into town and get food and water. The family’s funds soon start to dry up, but Parvana comes across Shauzia (Soma Chhaya), another girl posing as a boy, and the two find work together and forge a strong friendship. Whilst supporting her family at home, Parvana also tries to raise extra funds to bribe guards at the prison and try to see and release her father.

The Breadwinner made a good double feature with Apostacy, which I watched only a day or two prior to it. Both follow families of women/girls who are suffocated and torn apart by strict religious rules. As mentioned in my review of Apostasy, I appreciated the insight into a lesser known religion in that film. I’ve seen a few films that delve into the difficulties of women living under Islamic law and its various interpretations though, so the subject matter of The Breadwinner, as important and powerful as it is, didn’t interest me quite as much. However, director Nora Twomey and writers Anita Doron and Deborah Ellis (the latter of whom wrote the source novel) fuse this political message with an engrossing and emotionally satisfying story that younger audiences (though not too young) will be able to digest more easily than some of the more bleak and tough live action dramas about life in the Middle East at the time.

That’s not to say The Breadwinner glosses over any details or sugar coats the situation. Admirably the film doesn’t hide from the violent tyranny of Taliban rule and is still shocking at times. It’s just that the warm and relatable family focus, animated style and English language presentation make it more approachable to an audience who may not seek out something like Timbuktu.

The films of Cartoon Saloon are particularly noted for their visual style. Where a lot of Hollywood animated films tend to have a similar bog-standard CGI look, Cartoon Saloon stick to 2D animation techniques with a unique aesthetic that previously took inspiration from Celtic art and nature. Here the film’s visual style is separated into two distinct parts. The sequences with Parvana and her family have a more traditional look, with images and animation firmly rooted in reality. Also running through the film though are a couple of stories, the first told by Nurullah and the second by Parvana (which is told gradually in chunks throughout the film). These sequences are given a much more stylised look, using cutout characters and bold colours. They look fantastic and continue the trend of beautifully designed films from Cartoon Saloon.

These fantasy sequences also offer a little respite to the tougher side of the film, not only for the audience but for the characters too as they tell these exciting and often humorous tales of bravery to keep their heads during the harsh trials of their lives. Of course, the story ends with a message relevant to the core narrative, of the power of honesty and brave but peaceful protests against oppressors. As a final lines puts it ever more eloquently, “it is rain that makes the flowers grow, not thunder”.

Perhaps there are traces of sentimentality here and there, but overall the film is a moving and inspiring tale of life under Taliban rule. It doesn’t beat you down with a political message though. Instead it tells a satisfying and poignant story with elegant visuals, warmth and much humanity. Highly recommended.

The Breadwinner is out now on digital download and on 24th September on Blu Ray and DVD in the UK, released by Studiocanal. I saw the Blu-Ray version and the film looks and sounds fantastic.

The featurette and commentary are both solid and show you the thought and care that went into the production.