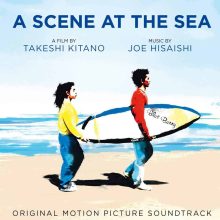 I haven’t written a soundtrack review for several years due to time commitments and the fact that I have ludicrously large playlists and mountains of new CDs to listen to, so it takes me months to give albums more than one listen usually. However, the surprise arrival of a couple of soundtrack CDs on my doorstep spurred me into action. The first of these I’m going to review is Joe Hisaishi’s soundtrack to Takeshi Kitano’s 1991 drama A Scene at the Sea.

The reason the disc piqued my interest, was that I’m a fan of Hisaishi’s work. He’s known largely for his regular scores for the films of Hayao Miyazaki, which I love. However, another director he frequently collaborates with (or at least used to) is Takeshi Kitano, and their work together is often as strong as the Miyazaki collaborations. So I was keen to listen to A Scene at the Sea, even though I must admit I haven’t yet seen the film.

Like Hisaishi’s other soundtracks from the era, it has a synthy sound to it that dates it somewhat and might not be to everyone’s tastes. Personally, I’m a fan though and find it’s easy to get past any technical limitations once the beauty of the music washes over you. And wash over you it does, as Hisaishi takes into account the ocean setting through the music. ‘Silent Love (Main Theme)’ has a glockenspiel-like rhythm running through, with synth backing and some half-whispered vocals creeping in as it goes on, as well as a beautiful violin solo that bursts in halfway through. It’s a real grower that begins simply and gradually develops into something quite lush that sweeps over you like the ocean waves. This theme is brought back later but adapted in ‘Silent Love (in Search of Something)’ and ‘Silent Love (Forever)’.

‘Cliffside Waltz’ is a standout too, with beautiful piano and cello lines running through. It opens very much like many of Hisaishi’s Miyazaki scores, but then turns into a more classic waltz. Both this and the ‘Silent Love’ themes are re-used in multiple tracks, making for a soundtrack that weaves together a few strands to make a nicely cohesive whole. It never feels repetitive though, as the alternative versions are evenly spread out and interspersed with a few more varied tracks.

‘Melody of Love’ for instance is a poignant piano-based theme. In a minor key, it’s more melancholic than some of the other tracks, which have more of a relaxed sweetness. ‘Wave Cruising’ on the other hand is a rhythmic, synth-heavy track. In fact, it sounds a little like something from a retro video game.

Fans of Hisaishi’s scores will love A Scene at the Sea. It’s reminiscent of much of his work – piano led with nice string arrangements, but all the better for it, and fairly minimal orchestration throughout makes for a poignant and intimate listen.