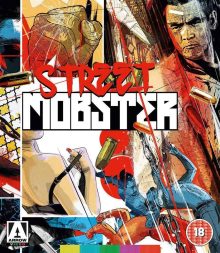 Street Mobster was the sixth and final episode in Toei’s ‘Gendai Yakuza’ series of unrelated gangster films starring Bunta Sugawara. However, it is better known now as a crucial turning point in the career of director Kinji Fukasaku. He’d been making films since the 60s to reasonable success and even managed to land a job replacing Akira Kurosawa on the US-Japan co-production, Tora! Tora! Tora!. He used the handsome paycheque he got for this to buy the rights to the novel Under the Flag of the Rising Sun. His 1972 film adaptation received great critical acclaim, even being selected as Japan’s entry to the Academy Awards for Best Foreign Film (although it didn’t get nominated), but it was Street Mobster, released that same year, which defined the style and direction his following career would take. This was when Fukasaku changed the portrayal of the Yakuza on film, from chivalrous, honourable warriors to nasty, greedy psychopaths. Fukasaku’s classic Battles Without Honour and Humanity soon followed and truly cemented his reputation as the master of this new style of Yakuza thriller, but Street Mobster was where it started. Arrow Video, following on from their release of the Battles Without Honour and Humanity and New Battles Without Honour and Humanity series and another couple of Fukasaku’s gangster movies are now giving the earlier film the treatment it deserves in this new Blu-Ray release. 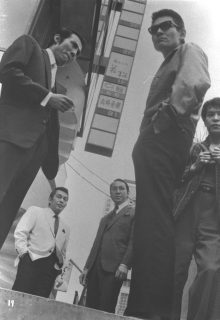 Street Mobster sees Sugawara play Okita, a gang member who gets thrown in prison following a violent knife attack. When he comes out a few years later, he jumps straight back into the action, putting together his own gang, teaming up with the Yakuza Kizaki and a group of young upstarts. However, Okita finds the criminal landscape has changed during his time away. Back in his day people just took what they wanted and beat up or killed anyone in their way. Now though he finds a more complicated web of gang politics and pompous ceremony. He attempts to carry on doing things the old way, but after getting injured he finds himself forced to join the Yato family (whose boss is played by Noboru Andô). Okita’s violent tendencies threaten the balance between rival families as well as his own life, but he plows on regardless. Mixed in amongst all this is Kimiyo (Mayumi Nagisa), a woman Okita raped and sold into prostitution before his prison time. They meet after he gets out and forge a strange and tumultuous relationship.

I was greatly impressed by the Battles Without Honour and Humanity series when I reviewed it a couple of years ago, as well as the other Fukasaku titles I’ve seen (and reviewed – Cops Vs Thugs and Doberman Cop) and this doesn’t buck the trend. In fact, most of the films’ strengths are the same so my review here will likely be very similar to what I wrote before. Nevertheless, let me ramble on as to why I thoroughly recommend you get yourself a copy of Arrow’s Street Mobster Blu-Ray.

It’s a fairly standard gangster tale, particularly by today’s standards, even if the traditional view of the honourable Yakuza was being slashed. However, it’s Fukasaku’s handling of the material that raises it up a level. His films are brimming with activity and energy. Each frame is filled with characters or action, with side performers given the chance to act big and not simply blend into the background to let the star shine.

That said, Bunta does shine here in what was to become a long and fruitful relationship with Fukasaku. The actor can be as cool and hard as steel, but is bubbling with rage which often explodes when somebody pushes his buttons. It’s not what you’d call a subtle performance, but it’s incredibly powerful and it’s a pleasure to watch him do his thing.

The film is thrilling to watch on a visceral level too. Using gritty, handheld camerawork and sharp editing, there’s a breathtaking drive to the film and a wild nature that mirrors the animalistic qualities of its protagonist. Adding to this wild style are some unusual and creative camera angles too.

So it’s another hard-boiled and exhilarating gangster movie from a director who I believe is possibly the best in the genre – Japanese or otherwise. No one can match Fukasaku for sheer energy and tough, visceral thrills and Street Mobster was where he first truly brought them to the fore.

Street Mobster is out on 6th August on Blu-Ray in the UK, released by Arrow Video. It looks and sounds fantastic, with rich colours, detailed textures and a natural grain.

There are a couple of special features included in the set too. Here’s the list:  - Audio commentary by Japanese cinema expert Tom Mes - Theatrical trailer - First pressing only: Illustrated collector’s booklet featuring new writing on the film by Jasper Sharp.

The commentary is decent, filling the listener in on the context of the production and other facts about the film and its cast and crew. I haven’t seen the booklet to comment on that.

* Please note – although the publicity stills used here are black and white, the film itself is in colour.