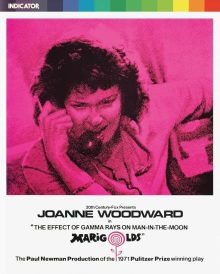 Paul Newman is one of the most famous American movie stars of the last 60 years, with numerous iconic roles under his belt in films like Butch Cassidy and the Sundance Kid, The Hustler, The Sting, Cool Hand Luke etc. Many people are also aware of him through his philanthropy, particularly the fact that his hugely successful brand of food products (Newman’s Own) donates all its proceeds (after taxes) to charity. What is less well known however, is that Newman directed a number of films, 6 in fact. None were particularly successful, commercially speaking (that I’m aware of), but most were rewarded with a decent level of critical acclaim. This area of Newman’s career is largely forgotten though now, so it’s great to see Powerhouse release his lengthily titled 1972 film, The Effects of Gamma Rays on Man-in-the-Moon Marigolds, through their wonderful Indicator label.

The film is adapted from Paul Zindel’s Pulitzer Prize-winning play of the same name and is a low-key family drama about Beatrice Hunsdorfer (Joanne Woodward – Newman’s wife from 1958 up until his death in 2008). She’s a single mother who is struggling to bring up her two daughters, Matilda (Nell Potts – Newman and Woodward’s daughter) and Ruth (Roberta Wallach – Eli Wallach’s daughter). Matilda is a quiet, introverted girl who loves science and is enamoured by her inspiring teacher Mr. Goodman (David Spielberg). Ruth on the other hand is a teenager whose main concern is boys and being part of the ‘in crowd’. Both girls are ashamed of their mother who is socially inept, has little money, possible mental issues and smokes and drinks too much. There’s little story among this domestic character study, but key events running through the film include the titular science experiment Matilda is working on and the arrival of a new tenant, ’Nanny Annie’ (Judith Lowry, who’d played the part extensively on the stage). This elderly lady is on death’s door and her daughter seems to have basically left her there to be cared for during her final days, rather than go through it herself. 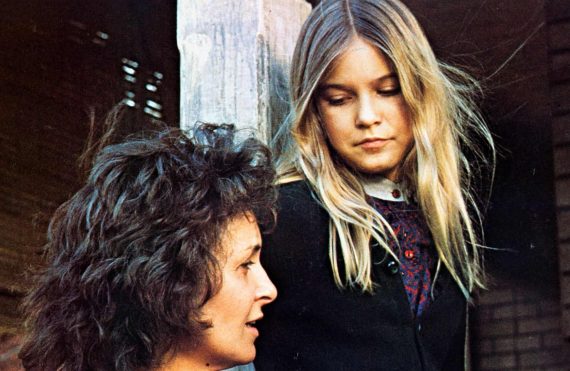 So it doesn’t sound like a barrel of laughs, and indeed the film paints a bleak portrait of a painfully dysfunctional family. Though you sense that deep down Beatrice loves her kids, on the surface she’s rarely sensitive to their needs or desires. She spends much of her time belittling them and others to desperately try to make herself look like the figurehead of the family and community she longs to be. Her barbed digs and endless bickering is actually darkly entertaining and helps keep the film from getting too dour and grim. However, there’s always a bitter edge to this wise-cracking that only loosely hides a character who is desperately lonely and unhappy with what she’s become (or possibly always was).

Although there’s little narrative to the film, there’s a powerful climactic scene that is horrifyingly moving and this is followed up by a final voiceover that adds an unexpected but effective moment of hope at the end.

As you may have noticed from my name dropping of cast members above, the film is very much a family affair, with Newman directing his wife and child, as well as the daughter of a friend of his (Eli Wallach was a fellow member of the Actor’s Studio). As such, the production seems like a self-indulgent case of nepotism on paper. However, Woodward delivers a commanding lead performance that few could likely match. She verges on over the top, but for me this brash approach fitted the character. In reality, Woodward hated playing the part as she found the character despicable, but I think this gives her performance an acidic edge and also allowed her to inject some small moments of pathos which prevent the audience from flat out hating Beatrice. The two young girls are good too, Wallach in particular, delivering impressively natural performances. 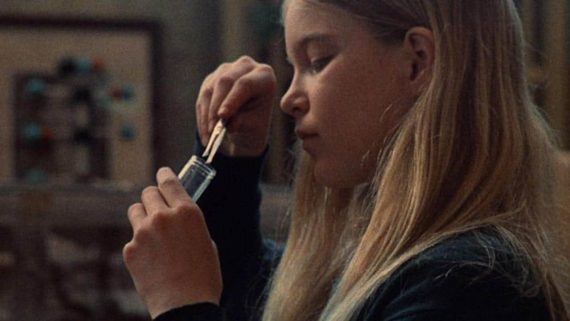 Looking at my opening comments about Newman’s directorial career going relatively unnoticed, one reason for this (borrowing/agreeing with thoughts from Adrian Martin in his excellent commentary track) could be that Newman’s film isn’t as ‘flashy’ as those of the more famous directors of the late 60s and early 70s. He doesn’t use experimental shooting or editing styles and doesn’t fill his film with attention-grabbing rock/pop songs. Instead, he lets his actors do the heavy lifting and presents the film in a naturalistic fashion that doesn’t distract from the content. He employed Maurice Jarre to do the soundtrack, who’s famous for his grand scores in the work of David Lean, but provides subtle, relatively minimalistic cues here.

It’s all part and parcel of this desperately sad low key drama that, like its lead character, masks its sadness with black comedy in Beatrice’s wild behaviour and rants, but the truth will out. The Effects of Gamma Rays perhaps plays things a bit big at times, particularly in Woodward’s snarling performance, but the film is surprisingly engrossing and not as painfully bleak as perhaps I’ve made out, with some genuinely touching moments here and there. If, like me, you’re a fan of these types of naturalistic dramas that were prevalent in the 70s, you owe it to yourself to check out this largely forgotten gem from the hugely talented Paul Newman (and family).

The Effects of Gamma Rays on Man-in-the-Moon Marigolds is being re-released on 30th April by Powerhouse Films on Blu-Ray as part of their Indicator label in the UK. The picture and audio quality are excellent, retaining that natural film grain nicely.

Once again Adrian Martin provides a superb commentary, packed with insight and important background information on the film. The two interviews/lectures with Newman and Woodward are presented over the film like commentaries and are both wonderful. The pair talk openly and intelligently about their careers, the industry, their craft and occasionally on politics at the time too.

The booklet is as superb as always, filled with thoughtful essays and period reviews. So once again Indicator have resurrected a largely forgotten film and given it the special treatment it deserves.