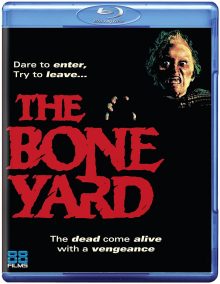 As a child of the 80s, I literally grew up in video rental shops. Before Netflix, before Sky Movies, before DVDs and before VHS tapes were released for the home market, this was the only way to watch independent films. I was fortunate that my friends’ dad rented videos from his hardware store and he would let us watch any that were in stock. Weekends and school holidays were largely spent devouring 80s classics such as Back To The Future, The Goonies, Ghostbusters and Gremlins to name just a few. Before long Mr Miller had noticed that low budget horror films were popular with his customers and his stock increased rapidly. Naturally as teenage boys we were drawn to his new acquisitions. As the 80s turned into the 90s, we must have watched literally hundreds of these horror films and now at the ripe old age of 45, I’m still devouring them on a regular basis. It is with some shock that I have never previously discovered 1991’s The Boneyard. In fact, I had never even heard of it until it was sent to me for review. Written and directed by former make-up artist and monster maker, James Cummins (who worked on John Carpenter’s The Thing amongst others), The Boneyard is exactly my kind of film – a B-movie with plenty of gore, humour and cheesy dialogue delivered by veteran actors.

The Boneyard starts with two police detectives, Jersey Callum and Gordon Mullin arriving at the home of psychic, Alley Oates. Alley (played by Deborah Rose) has helped Jersey solve cases in the past, but is now burned out and living in squalor as a virtual recluse. They want her help to solve a perplexing case involving a mortician who has imprisoned three young children. However, Ally isn’t interested and cannot be drawn out of retirement. Later that night she has a vision of the decaying corpse of a young girl that rises from the grave and hugs her, seemingly to thank her for her help in a previous case, which in turn leads her to change her mind about helping the police. 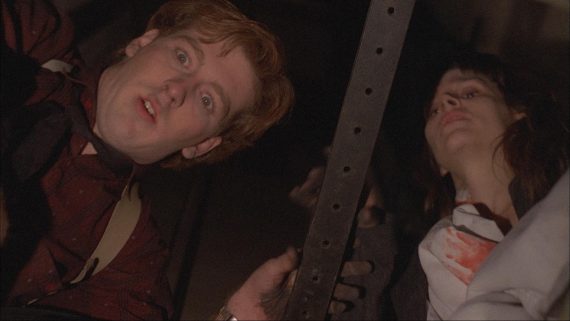 At the police station, Alley and the detectives watch the interrogation of the mortician. He explains that the three children are in fact Kyonshi, Japanese ghouls that his family has kept imprisoned for 300 years feeding them cadavers’ body parts to prevent them from devouring the living. This leads the trio to move their investigation to the titular Boneyard, a soon to be closed coroner’s building. Here they meet the night receptionist, the fantastically named Miss Poopinplatz (Phyllis Diller) and her annoying poodle.

Alley has a vision of the three ghouls awakening downstairs in the morgue and she rushes down to warn everyone. Nevertheless, when she does reach the morgue all she finds is broken glass and blood, not knowing the gruesome surprise awaiting around the corner.

The Boneyard is far better than it has any right to be. Despite a slow start with the two detectives searching Alley’s house for far too long, the film is pretty fast paced with loads of action. The three ghouls are truly gruesome and disturbing – they could have easily have been imported from a Japanese horror film – and in the final act, zombie-like demons are unleashed that have a real Evil Dead 2 look about them and are testament to Cummins’ skill as a visual effects artist. 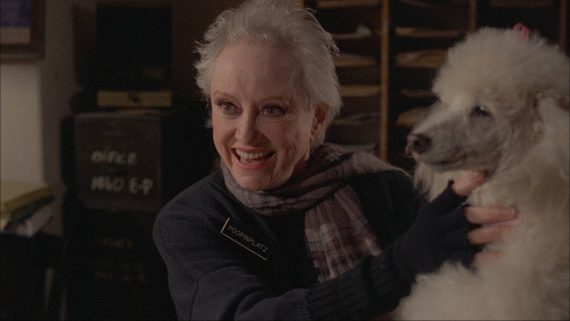 The cast are all strong particularly Deborah Rose as the psychic, giving emotional weight to her character that in most B-movies would just be a cardboard cut-out. She is world weary, haunted by the crimes she has helped solve in the past and plagued by memories of dead children. Ed Nelson is also good as the rugged detective, as is Norman Fell playing a hippy mortuary assistant. My favourite performance though belongs to comedienne Phyllis Diller as the over the top and hugely obstructive Miss Poopinplatz.

I’m so glad I’ve discovered this gem of a B-movie and have been happily recommending it to all my friends this week. I urge anyone who is a fan of fun 80s/90s horror movies like Evil Dead, Return Of The Living Dead and Braindead to give The Boneyard a go – you won’t be disappointed. Watch out for that poodle though…

The Boneyard is released on Blu-ray by 88 Films and includes the following extras: