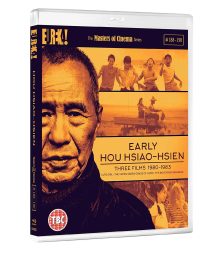 The New Taiwanese Cinema movement between 1982 and 1990 brought forth a host of critically acclaimed films. Unfortunately, these have been poorly released in the UK though, so they’ve always been hard to track down without paying extortionate import rates. Thankfully, a couple of UK distributors have recently started to give some of the movement and its key directors’ work the releases they deserve, with Edward Yang’s Yi Yi and A Brighter Summer Day being added to the Criterion Collection and Eureka adding Hou Hsiao-Hsien’s Daughter of the Nile to their Masters of Cinema series. The latter is now being followed up by a collection of three of the director’s early films on Blu-Ray, titled Early Hou Hsiao-Hsien: Three Films 1980-1983. The titles included are Cute Girl (a.k.a. Lovable You or Jiu shi liu liu de ta), The Green, Green Grass of Home (a.k.a. Zai na he pan qing cao qing) and The Boys from Fengkuei (a.k.a. Feng gui lai de ren or All the Youthful Days).

Below are my thoughts on the three films included and the set as a whole.

Cute Girl was made as a star vehicle for Taiwanese pop-stars Kenny Bee and Fei-Fei Feng. Feng plays the titular ‘cute girl’, Wenwen, whose parents are keen to get her married off to a rich man to strengthen her father’s business and help her grow up. She’s not so keen on the idea though. Also refusing to accept adulthood is Daigang (Bee), who looks after an orphan boy but won’t let him call him dad. The two wannabe Peter Pans both end up in a small rural village – Wenwen is there for some space, staying with her aunt, and Daigang is there for work. The two soon hit it off, but when they head back home to the city they are separated due to Wenwen’s family’s desire for her to marry into money (Daigang is a lowly surveyor). Daigang won’t take no for an answer though and doggedly tries to derail Wenwen’s proposed marriage to the dull Qian.

Hsiao-Hsien himself supposedly disowned his first three films (this, Cheerful Wind and The Green, Green Grass of Home) and the critical reception to them is a far cry from what his most famous work has received. So my expectations were quite low for this, but I must say I was pleasantly surprised. Yes, it’s very slight and clearly studio-controlled, but I found it surprisingly charming. The comedy is goofy and broad (even featuring some toilet humour), and the drama sappy, but it gets away with it through a light touch and likeable leads.

Much of the film is dated, such as the attitudes towards women, some of the gags and the music (the film is a pseudo-musical, featuring a couple of songs), but I found this quite endearing in a kitsch sort of fashion.

Yes, the film is throwaway fluff and far from the masterpiece many of Hsiao-Hsien’s films are deemed to be, but for a frothy romantic comedy from the early 80s, it’s not bad. Colourful, light and charming, I found myself enjoying the film despite its shortcomings.

The Green, Green Grass of Home

The Green, Green Grass of Home once again gives pop-star Kenny Bee top billing, here as Ta-Nien, a new teacher in a rural village. His story, which again involves falling for an attractive young woman he meets out in the styx, is largely sidelined though in favour of the exploits of a group of his young pupils, dubbed ‘The Three Musketeers’. These three boys are from poor backgrounds and get into all manner of mischief. We learn that they mean well though and many of their faults come from issues with their parents. Ta-Nien helps the boys thrive and transcend their lowly backgrounds whilst also helping protect the local river.

Once again I was surprised by how much I enjoyed The Green, Green Grass of Home, which was another film Hsiao-Hsien had little love for once he found critical success in later years. It felt less slight and throwaway than Cute Girl too, ushering in more social commentary and naturalism (although there’s a sweet little fantasy scene thrown in to keep things light). There’s still a bit of a cheese-factor and an excuse for a naff pop song or two, but it also has something to say. This can be blunt, in the case of the environmental message about protecting the river that provides a through-line for the film, but insights into the children’s parents are more subtle and at times quite moving. 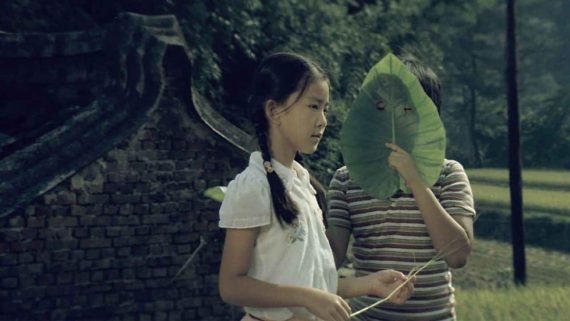 Hsiao-Hsien also draws some fine performances out of his young actors. They all seem quite natural and it’s fun to watch them play off each other, particularly when the ‘Three Musketeers’ are goofing around together.

The film seems quite episodic at times and some of Ta-Nien’s story felt a bit weak and tacked on, but most of the strands elsewhere tie together nicely by the end.

Overall it’s a lovely little film about growing up in a poor rural village. Yes, it’s sentimental and quite slight, but it’s sweet natured and features a couple of genuinely poignant scenes. The child actors are very good too and the film is attractively presented with an air of naturalism that pointed towards what was to later come from the director.

The Boys from Fengkuei

The Boys from Fengkuei follows Ah-Ching (Doze Niu) and his friends as they struggle to figure out what to do with themselves after finishing (or dropping out of) school. First they bum around their fishing village, drinking, getting into fights and hassling the local girls, but eventually they decide to try and move on. They head to the big city where one of their sister’s lives and she helps them find an apartment whilst they look for work. Life isn’t quite as carefree and easy in the city though and the boys start to learn the harsh realities of life as an adult. In the meantime, Ah-Ching falls for the girl-next-door (Li-Yin Yang), who is living with her longterm boyfriend but clearly unhappy with him.

The Boys from Fengkuei is where many critics and Hsiao-Hsien himself believed his career as a director truly came of age. As much as I was surprised by how much I enjoyed the other two titles in the set, I can see why this is often considered the case. Losing all sense of studio control or fluffy sentimentality, The Boys from Fengkuei is a much more mature work that shows a director in full command of his medium. 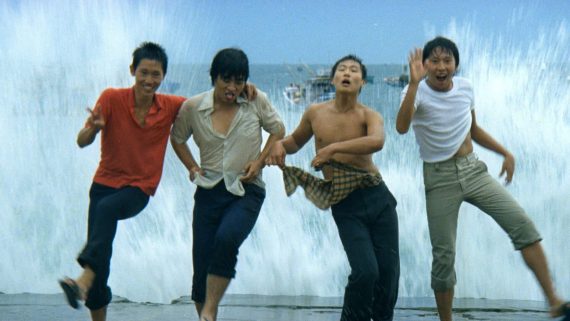 Employing some long held, but carefully staged shots that would become his trade mark later in his career, the film is elegantly presented. As nicely framed as his previous films were, there are slightly more unusual, artistic choices made here too. The shots aren’t chosen simply to look pretty either. Hsiao-Hsien shows a knack for visual storytelling, using subtle shot choices or understated performances to tell us what’s really going on in a scene, beyond what we’re told.

The naturalism of the location shooting and performances is very effective, but there are also some beautifully incorporated flashbacks that take you out of the present. These largely feature Ah-Ching remembering his father who he loved deeply but became brain-damaged after a baseball accident. The most impressive transition into one of these flashbacks sees the camera pan from Ah-Ching in the present day to what he would have been gazing at in that spot in the past. During the pan, the exposure seamlessly increases to give the flashback visuals a brighter, hazier look.

It’s a slower, tougher watch than the other titles in the set and if I were to pick out one flaw in the film I’d say the classical music chosen to underscore the film doesn’t always work, but overall it’s clearly a finely crafted and masterfully controlled film. What it lacks in plot it makes up for in beautiful and often deeply moving observations of the fragile moment in life when you must progress from child to adult. Watching the three films in this set in succession, you can see Hsiao-Hsien move through the same transition and The Boys from Fengkuei marks the moment he’d fully grown up, cinematically-speaking.

Early Hou Hsiao-Hsien: Three Films 1980-1983 is out now on Blu-Ray in the UK, released by Eureka as part of their Masters of Cinema series. The films look good. Cute Girl has some slight colour fluctuation issues at times and The Green, Green Grass of Home has a couple of burnt out looking shots, but considering their relative obscurity and age, they look decent. The Boys from Fengkuei is flawlessly presented though and looks the best of the bunch. Soundtracks on all three are solid too.

There are a few special features included in the set. These include:  - Video essays on all three films by Adrian Martin and Cristina Álvarez López
– A collector’s booklet featuring a new essay by Phillip Kemp

These provide a thoughtful analysis of the films, which is especially welcome for the earliest two titles, which are often dismissed as throwaway studio efforts.