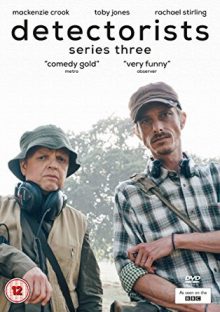 A few years back, I was offered the opportunity to review a new comedy series written by, directed by and starring Mackenzie Crook. Having been a big fan of Crook’s performance as Gareth Keenan in Ricky Gervais and Stephen Merchant’s seminal sitcom The Office and being a fan of comedy in general, I put aside my misgivings about some of Crook’s other projects and decided to give it a whirl. It was one of the best decisions I ever made as the new series, Detectorists, proved to be an instant comedy classic. As I fell quickly and completely in love with the series, I realised that my initial doubts based on previous Crook vehicles like Three and Out and Sex Lives of the Potato Men were dunderheaded at best and, at worst, mean-spirited. After all, holding performers completely responsible for their lesser projects is sheer folly. Actors have to work, scripts can totally transmogrify in their journey from paper to screen and while it might be easy to crow “What was (Insert name here) thinking?” in reference to an artistic failure, the idea that actors can idly pick and choose their projects without any concern for their career or finances is an unfair assumption to make.

Since his career making turn in The Office, Crook had appeared in several high-profile roles including a recurring part in the Pirates of the Caribbean films but upon the release of Detectorists it became clear that this was his passion project, a labour of love the development of which those Hollywood appearances probably helped to finance. Though it emerged quietly on BBC4, Detectorists became a small word of mouth hit, impressing its gradually increasing group of fans with a gentleness and intelligence that had seemed lacking in the sitcom genre for some time. Combining slice of life simplicity with great characters and a good-natured treasure-hunting adventure plot, Detectorists turned its back on the cruelty and cringe that had been the stock in trade of much cult comedy of the 00s, while also managing to tap into the charms of classic comedy without becoming a 70s pastiche as many studio sitcoms of the 2010s seemed to be. The result was a prestige package that had the alluring look and feel of a moderately-budgeted British film. While the first series initially felt so perfectly realised that it seemed a shame to make any more, Detectorists series two kept up the standard and further increased the viewing figures. Crook managed to re-engage all his key cast members including Toby Jones as Lance, without whom the series wouldn’t work. Following a one-off Christmas special, there was a long period when the prospect of more Detectorists seemed unlikely. Crook himself was unsure if there was any more mileage left in the concept. But he finally announced that he would indeed be making a third series, with the bittersweet caveat that it would definitely be the final outing for his creations Andy and Lance. 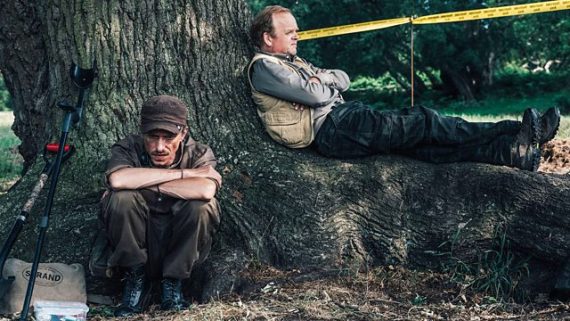 By this stage of the game, any fears I had of Detectorists overall quality being tainted had completely subsided. After the first two series, my faith in Crook’s writing and directing and the acting of the entire cast was so strong that I couldn’t imagine being disappointed. After the first episode went out, BBC4 reported record viewing figures for a comedy series aired on the channel and critical response was equally enthusiastic. For anyone already on board with the show, this fantastic opening episode was more than enough confirmation that we were in for a treat and the subsequent series more than delivered on that promise. At this stage, the job of reviewing Detectorists series 3 becomes somewhat tricky because, though it moves at a gentle pace and refuses to rely on showy twists and turns in plotting or surprise changes of setting, it is still one of the most thoroughly engaging shows in recent memory and part of the joy lies in wondering exactly what will befall our unlikely heroes this week. It’s also hard to review Detectorists series 3 without essentially reviewing the whole three series, as it feels so much apiece with its predecessors and much of the pleasure of watching it derives from returning to that world and those characters once more. In order to preserve this pleasure for those who have yet to see this final outing, I will keep my review short and vague. Suffice it to say, Crook has come up with an ingenious new plotline inspired by The Unthanks’ haunting folk ballad Magpie, which he brilliantly interweaves with the ongoing domestic lives of Andy and Lance and the charming exploits of the Danebury Metal Detecting Club. 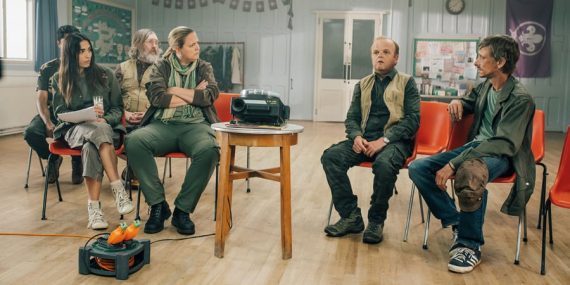 Only one former regular cast member is missing from series 3. Aimee-Ffion Edwards does not return as Sophie but her absence is expertly covered by the beefing-up of Alexa Davies role as Lance’s daughter. Rebecca Callard as Lance’s girlfriend Toni, introduced in the Christmas special, is also an excellent addition to the cast while the return of Lance’s ex-wife Maggie gives the superb Lucy Benjamin a chance to shine as she is given some of the funniest moments or, rather, she makes them the funniest with her frustratingly perfect performance as an arch manipulator. Alongside these additions, all the regular cast are enchanting as always, seeming more at home in their respective characters than ever. Having now watched the series through twice, I’m very tempted to say that this final outing is the best of the three series. On second watch in particular, there are lots of little details to notice that elude you first time round and even when you know the outcome of the adventure, it remains as uplifting and satisfying as it was the first time round. Closing on the perfect final image, Detectorists series three ends a real treasure on a high note. It is one of the most feelgood series I’ve ever had the pleasure to watch and in the absence of any further episodes I don’t doubt that I will watch the nineteen we have been gifted over and over again for the rest of my days.

Detectorists series three is released on DVD by Acorn Media on 18 December 2017, along with a complete series boxset featuring all three series and the Christmas special. Special features on the series three DVD are as follows: