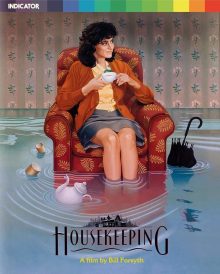 Bill Forsyth is a Scottish director who’s fairly well known (in the UK at least) for two of his early 80s releases, Gregory’s Girl and Local Hero. The rest of his career is little known to me though and, looking at his filmography on IMDb, his career seemed to thin out after the 80s and his last few releases in the 90s were commercial and critical flops. Right in the middle of this unusual career however, is a film called Housekeeping. I must admit I’d never heard of it before being sent a press release about this forthcoming Indicator Blu-Ray/DVD re-release. Scanning the reviews it seemed to be worth watching though and I do enjoy Gregory’s Girl (I’ve seen Local Hero too, but it’s been decades, so my memory is hazy), so I took a chance on it.

Housekeeping is based on a novel by Marilynne Robinson and follows the troubled lives of two sisters, Ruth (Sara Walker) and Lucille (Andrea Burchill) in 50s rural America. They never knew their father, their mother commits suicide when they’re young and they live with their grandmother for seven years until she dies too and they’re left with their formerly transient aunt, Sylvie (Christine Lahti) who they hadn’t met since they were babies. The girls are initially excited to be with her as she can help them discover more about their mother, but she’s an unusual woman, with no standard motherly instincts or discipline, and Lucille in particular grows tired of and embarrassed by her eccentricities. As such, the sisters, after being inseparable from childhood, gradually grow apart and Ruth is forced to choose between the freewheeling yet isolated existence of being with Sylvie or the stereotypical nuclear family and teenage experience Lucille craves.

It sounds like another coming of age story (I seem to reviewing a lot of these lately) and it is, in many ways, but it feels different to your classic tale of burgeoning sexuality or journey to find oneself. It fits the latter mould on paper, but Housekeeping is a most unusual film that feels like few others. Forsyth’s two biggest successes are often described as charming or quaint, but although this later film has elements of humour in its quirky characters, it’s largely quite melancholic in tone and rather dark. The girls fear that Sylvie is very similar to their mother and might kill herself or at least disappear and go back to roaming the country by herself. This sense of dread looms over everything. In a different film, or with a different director, Sylvie’s actions could be presented as fun and ‘wacky’, but Forsyth and Lahti imbue the character with mystery and an underlying sadness. There’s a sense that she actually has mental health problems and the overly loose freedom she allows the girls is potentially damaging.

The hard to pin down characters give the film a lot of depth and an emotional complexity that makes for an engrossing watch, despite a fairly rambling story which contains few big dramatic incidents. It’s a film I could wallow in for hours as the characters are so fascinating. The idea of being comfortable in isolation is explored too, which I was particularly interested in, being a rather introverted loner myself.

Helping support the content is a richly cinematic presentation. Michael Coulter, who also worked on That Sinking Feeling and Gregory’s Girl with Forsyth, is the cinematographer and he works beautifully with the Canadian landscape, doubling for the Pacific Northwest. There’s a wonderfully realised period atmosphere too. 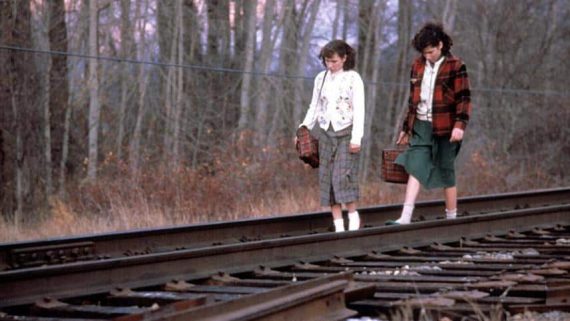 Adding to the beautiful visuals is a fittingly minimalist, largely string led score by Michael Gibbs. It perfectly complements the subtle, quietly poignant film it accompanies. It’s a shame it’s not available as a soundtrack album as I’d love to listen to it on its own.

Suffice to say, I loved the film. It’s sad, but with enough of a sweet, poignant undertone and subtle black humour to keep it from being bleak or miserable. Perhaps I saw a lot of myself in the two dreamers, happy in their isolation, but I found myself intensely drawn to the film. It’s beautifully made, without showing off about it, and ends on one of the most perfect and quietly powerful final shots I’ve ever seen. It’s a true gem of a film and I’m hugely thankful to Powerhouse/Indicator for giving it the release it deserves. It certainly holds its own against Forsyth’s better known films and should share their popularity in my opinion.

Housekeeping is being re-released on 22nd May by Powerhouse Films on Dual Format Blu-Ray & DVD as part of their new Indicator label in the UK. I saw the Blu-Ray version and the picture and sound quality are both excellent.

The interviews included are all wonderful. Forsyth’s is particularly good as he goes into great depth on the production process and how he works, which is fascinating to hear. He’s a modest and honest speaker, so refreshing to listen to. The BFI interview plays over the first half and hour of the film like a commentary and is equally as valuable an addition as his interview.