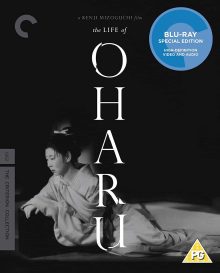 I’ve covered most of Kenji Mizoguchi 1950’s films here in my review of Eureka’s outstanding ‘Late Mizoguchi’ box set. However, frustratingly absent from that otherwise exceptional set was one of the director’s most well respected films, 1952’s The Life of Oharu. Out of print on DVD for a while, it’s been fairly hard to come by without paying a hefty price tag. Luckily The Criterion Collection have come to our rescue and released the film on Blu-Ray in the UK (and the US I believe), so I was keen to finally check it out.

Like most of Mizoguchi’s work, The Life of Oharu centres around a female protagonist (the titular Oharu, beautifully played by Kinuyo Tanaka) who is hard done by the men around her. The film opens to show her as an ageing prostitute, struggling to attract any customers on a cold night in 17th/18th Century Japan. Sheltering in a temple filled with statues of Buddha, one reminds her of a man from her past and she reminisces about how she ended up in this position.

We learn that she was once a noble woman, but her love for a lowly page, Katsunosuke (played by Toshirō Mifune, a fact I somehow didn’t clock until writing this review), causes her and her family to be banished from the court and Katsunosuke executed. From here on out, Oharu is knocked further and further down the social strata as she is used and abused by those in power.

It’s as relentlessly bleak as my synopsis alludes. Oharu is constantly trod upon by those above her – mainly men, but occasionally women. Her treatment in the film is summed up in the line “you’re no different than a fish on a chopping board. We can serve you up any way we like.” Nobody respects Oharu’s feelings, other than Katsunosuke, who is cruelly snatched away from her early on in the film. Whenever it looks like life might be turning happy for Oharu, something kicks her back down a level. There is as much comment on class as gender, but there are plenty of despicable men in the film, so it did make me feel a little ashamed to be male. You also get some boldly offensive abuse thrown at Oharu, like “get off somewhere and die, you rotten whore!” I doubt you’d hear this in a Hollywood film of the era. 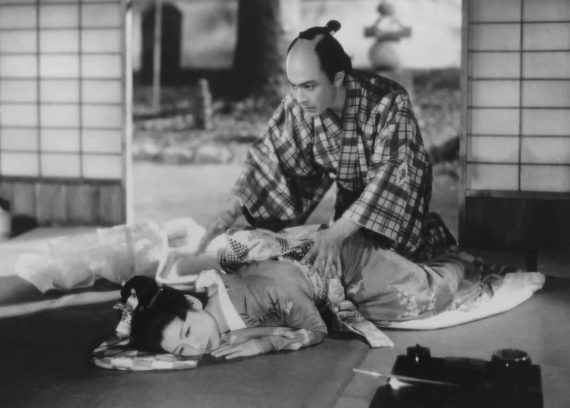 Oharu does get her own back against one of her antagonists though in a memorable scene. She sends a cat to steal the wig from her cruel mistress who has kept her hair loss secret from her husband. Most of the time Oharu reluctantly accepts her lot in life though, and attempts to do so with grace and poise whenever possible. She struggles to keep her head held high in later scenes though when she is humiliated without having her beauty to fall back on.

As ever, Mizoguchi is shown to be a master of mis-en-scene. He demonstrates a striking use of composition and plenty of graceful, immaculately blocked out camera movements. There’s a great use of depth too, such as in the scene following Katsunosuke’s execution, when Oharu runs through the woods and the camera sweeps along with her, the layers of trees whizzing by, heightening the senses.

Some key scenes early on which would have been quite scandalous at the time are handled beautifully. When Oharu falls into Katsunosuke’s arms, he whisks her out of shot and the camera lingers on the empty space to let the audience fill in the rest (although we do catch a brief glimpse of them together a little later). Katsunosuke’s execution is powerfully portrayed too, without over-egging it. After he dictates a brief message for Oharu, his death is swift and the camera moves just far enough away to spare us the gory details, yet we feel the blow through the sharp movement and Katsunosuke’s shrill final cry of “Oharu!” 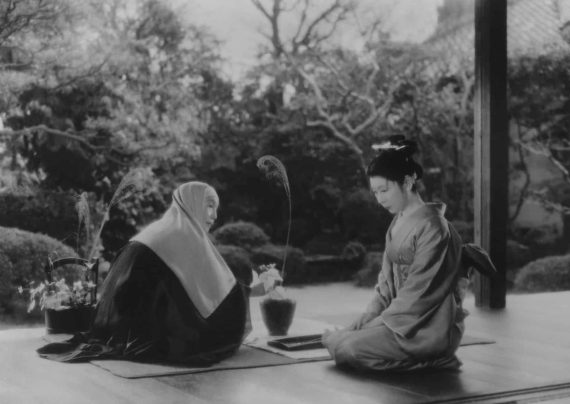 Although it’s quite long and hardly barrels along at any sort of pace, Mizoguchi tells his story quite economically. A lot happens to Oharu throughout the film, so different chapters of her life are largely quite brief, meaning Mizoguchi has limited time to show what happens and also elicit enough emotional resonance to make each segment effective. He does so with ease, utilising his mastery of the art of cinema to do so. Some bold visual symbolism is employed for one. Two great examples of this come in the scene when Oharu is first taken to the house of a lord who buys her as a concubine to provide an heir to his empire (his wife is barren). Mizoguchi shoots an intrusive medical examination from a high angle, showing a crowded space enclosed by a jagged prison of folding screens. A following shot, when Oharu first meets the lord, frames them in windows, emphasising Oharu’s entrapment once again and creating a division between the two subjects.

I didn’t find it as emotionally draining as Sanshô Dayû, but it’s every bit as beautifully made. I found the climax of the film, involving the son taken away from Oharu not long after birth, utterly heartbreaking though. Like the work of Ozu, the steady formal style and downplayed melodrama builds to a head that has more impact than you might expect as you watch.

The film isn’t easy going and feels slow like most Japanese dramas of the era, but it’s an exquisite piece of filmmaking. It’s bleak and fairly relentless in punishing its protagonist, but does so with enough grace and effortless skill to never feel blunt or soulless. Without a doubt it’s a masterpiece.

The Life of Oharu is out on 24th April on Blu-Ray in the UK, released by The Criterion Collection. The picture and sound quality is maybe not quite as pristine as some Hollywood films of the era, but it still looks great and it’s fantastic to see this available in HD after being difficult to track down for a long time.

It’s not the largest collection of features Criterion have provided, but the commentary is strong, even if it doesn’t stretch along the full running time. The audio essay is interesting too, although spends more time discussing Utamaro and His Five Women than Oharu. The documentary about Kajiyama is more a curiosity than anything else, but I enjoyed looking at the archive film and photography from the era.