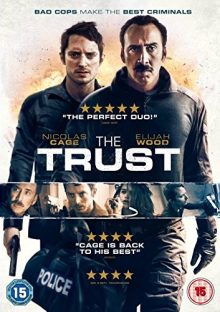 Now this is a pleasant surprise. A short, snappy and slick thriller with black comedy overtones, The Trust is a wicked little piece of crime fiction with its two leads on fine form. Cage and Wood play two shitheel Las Vegas evidence cops who get wise to a hidden safe in a local supermarket which promises to be full of hidden drug money. Seeing their chance to get rich and out of their mundane lives the two hatch a plan to crack the safe, steal the goods and get out of town. However, and is the norm with would be criminals, the plan rarely stays on track, loyalties are tested and matters take a turn towards the dark as the contents of the safe could actually be the undoing of the two low life cops.

Smart and sharp, The Trust starts of fun and frothy as the two not exactly straight arrow cops hatch their plan. The dialogue crackles, the comedy flows (in an often subtle and very black manner) and the two leads bounce of one another with aplomb. Wood is the straight man of the two, his junkie nerves and general ineptitude at life meaning he’s more sucked into the elaborate safe robbing plan out of having no better options. Cage on the other hand is gung-ho ready to go, one tiny step away from being a full blown robber/criminal and one is never really sure if he’s just eccentric or an actual psychopath who was just waiting for his chance to hit it big. The two inhabit their characters vividly and Cage is often a hoot, just the right side of over-the-top with a dangerous side just waiting to boil over.  Say what you will about the guy (and the internet often does) he is absolutely great here and one of the film’s biggest successes. 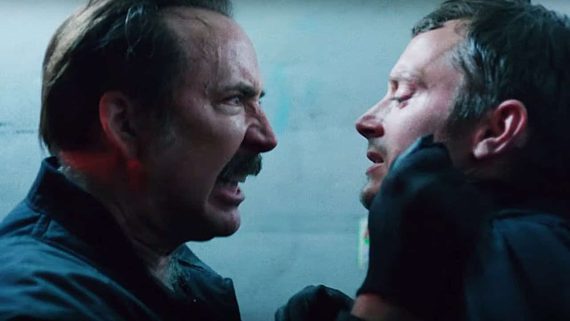 Backing up the two leads is the sharply written, albeit pulpy, script that’s doesn’t spoon feed the viewer and makes the two leads much more likable and engaging than they should be. Once the safe cracking is under way the narrative switches into a crueller gear as the crime trappings bare their teeth and the true nature of the vault is revealed. However, directing duo Alex and Ben Brewer keep the comedy and crime ratio  balanced just right, ratchet up the tension in the closing third and shoot the Las Vegas settings in lush widescreen (courtesy of DP Sean Porter) giving the film a neon soaked seedy but sumptuous look. Sure there are a few niggles: the two leads become seemingly expert safe crackers a little too easily, the ending may split viewers (though this nobody reviewer thought it was a perfectly fitting conclusion) and proceedings are maybe zipped through a little too fast in order to get the safe cracking. 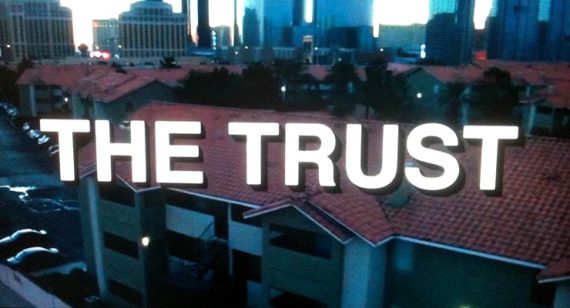 Still, with it’s toe tapping soundtrack, twisty narrative and snappy dialogue The Trust is a welcome return to how they used to make films, a breath of fresh air in amongst all the never ending TV series and unstoppable superhero movies and for most of its just under 90 minute runtime an absolute treat. Seek it out.

The Trust is out now in cinemas, available on demand and will be released and DVD and Blu Ray July 18th from Signature Entertainment.