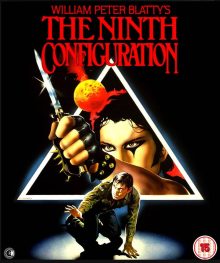 William Peter Blatty is best known for writing the novel and screenplay for the hugely successful horror film, The Exorcist, but it’s not well known that prior to that he made his name writing comedies such as A Shot in the Dark (co-written with Blake Edwards). To follow up The Exorcist however, Blatty went in a bizarre new direction, taking cues from both sides of his career. He took a book called Twinkle, Twinkle, “Killer” Kane he’d written in 1966, wrote a new version called The Ninth Configuration, released as a novel in 1978, and then turned that into a screenplay which would become his directorial debut, released in 1980.

The Ninth Configuration is an unusual film that sees military psychologist Col. Vincent Kane (Stacy Keach) sent to a remote mansion where a group of mentally ill and AWOL soldiers are being kept under observation. Supposedly the army couldn’t fathom why so many of its men were returning home from Vietnam with mental health problems and wanted to see if they were faking or not and what could be done about it in either case.

Once there, Kane finds the patients more troubled than he imagined and, following an interesting theory about Hamlet from one of the patients, he decides to indulge their strange requests and fantasies. One patient in particular catches his interest during this time, astronaut Capt. Billy Cutshaw (Scott Wilson). He completely snapped just before being due to pilot a rocket to the moon and now questions the existence of God in amongst his wild behaviour. Kane is determined to prove the existence of God to Cutshaw by giving a true example of self-sacrifice to help others, but in doing so, he starts to crack himself.

From the opening couple of minutes you know this is going to be an odd film. A sappy ballad introduces us to Cutshaw in the pre-credits scene as he sits looking mournfully out of the rain-soaked window of a gothic mansion (the asylum in which he’s based). This then promptly cuts to opening credits running over a shot of a rocket being launched, with a huge moon rising up in the background. It’s a nightmare of course, but the jarring juxtaposition of scenes is a sign towards what’s to come.

The film is an unusual mix of brooding psychological thriller, theological drama and broad comedy. This makes for a unique watch, but it doesn’t always gel. The comedy in particular didn’t really work for me. There are plenty of witty lines, but when placed within the moody atmosphere of the film as a whole they never made me laugh. I think the seriousness of the main story arc made the depiction of mental disorder mildly offensive too. You don’t get the depressing reality of post traumatic stress disorder, but rather a cast of oddball characters who dress up like Super Man and attempt to put on Shakespeare plays acted out by dogs. In today’s more PC times it did stand out for me as feeling quite wrong.

I wasn’t a big fan of Keach’s lead performance either. His uber-deadpan approach was imposed by Blatty (according to interviews included on the disc), so must have been intentional rather than ‘bad’ acting, but it didn’t quite work for me. With so little emotion displayed, it’s hard to care for the character and he just seems too crazy himself from the offset because of this.

However, the film is undeniably intriguing. There’s a nice double twist before the final act which I only half saw coming. The theological debate gives food for thought too and the film’s denouement is effective. For genre fans, you also get an incredibly brutal bar room brawl when Cutshaw breaks out of the hospital, only to fall victim to a biker gang. The film looks good too; the gothic setting is impressive and some moon-based crucifix-featuring nightmares are well realised.

It’s a film I found tonally unsure of itself and it seemed a little messy because of this. In reality the film is sure of itself in narrative and structure though, and contains enough brains and spectacle to keep you interested. I imagine it’s a film that responds well to repeated viewings once you’re attuned to its unusual nature, so I’m happy to recommend The Ninth Configuration despite my problems with it. 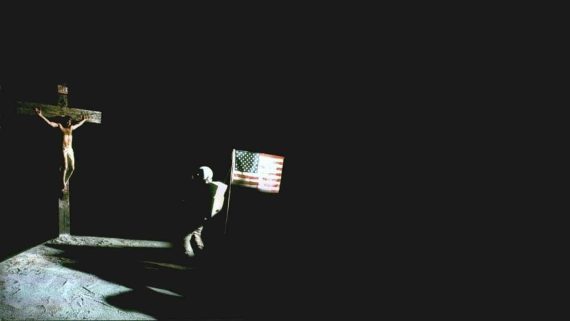 The Ninth Configuration is out on 25th April on Blu-Ray and DVD in the UK, released by Second Sight. I saw the Blu-ray version and the film looks and sounds great.

There are a tonne of special features included too. Here’s the list:

All of these are decent and refreshingly honest. The commentary is especially strong and covers most of what you’d want to know about the production and film’s reception. Blatty is particularly fond of the film and rates it as possibly his finest achievement, so his passion for the project shows in his contributions to the features. ‘The Party Behind the Curtain’ gives a more warts and all view though as we hear about the boozing and partying that went on off camera, culminating in a real life bar room brawl in a pub close to the location.

It’s a brilliantly comprehensive set of extras, which is nice to see for a relatively obscure release. It’s grown a bit of a cult status over the years, but not enough for anyone to expect such grand home release treatment. So thanks must go to Second Sight.