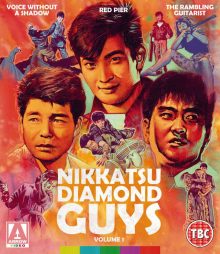 Arrow Video are planning to release a new series of budget Japanese genre movie box sets, beginning with Nikkatsu Diamond Guys Vol. 1. I’m feeling lazy this morning, so rather than explain the set’s title in my own words, I’ll just borrow the blurb from Arrow’s press release:

‘Nikkatsu, the oldest film studio in Japan, inaugurated a star system in the late 1950s, finding talent and contracting to their Diamond Line for a series of wild genre pictures. This collection celebrates these Diamond Guys with three classic films from directors Seijun Suzuki (Branded to Kill), Toshio Masuda (Rusty Knife) and Buichi Saito (Lone Wolf and Cub: Baby Cart in Peril).’

The films included in the set are Voice Without a Shadow, Red Pier & The Rambling Guitarist. Below are my thoughts on the individual films.

Voice Without a Shadow

Voice Without a Shadow begins with switchboard operator Asako (Yôko Minamida) accidentally patching through to a wrong number where she hears the voice of a killer who has just committed a murder, later to be dubbed the ‘pawn shop massacre’. With her knack for recognising voices (due to her job), the police bring her in to try and identify the culprit, without success. Three years later, a reporter named Ishikawa (Diamond Guy Hideaki Nitani) stumbles across Asako who he recognises from the time of the murders (she ran the switchboard in his paper’s office). She has been plagued by the killer’s voice all these years and is currently in a troubled marriage with Kotani (Toshio Takahara). Her husband has been struggling with unemployment for a while, but finally finds work. This comes at a price though as the couple’s home soon becomes the regular location for mahjong gambling parties frequently won by the shady Hamazaki (Japanese gangster favourite, although quite young here, Jô Shishido), putting Kotani in debt. To make matters worse, Asako recognises Hamazaki’s voice as that of the killer.

After Asako convinces Kotani to confront Hamazaki and put an end to the gambling at their house, Hamazaki is discovered dead. Through Asako’s testimony and several pieces of evidence, Kotani is considered the prime suspect, but Asako and Ishikawa are convinced otherwise so try to get to the bottom of the mystery. 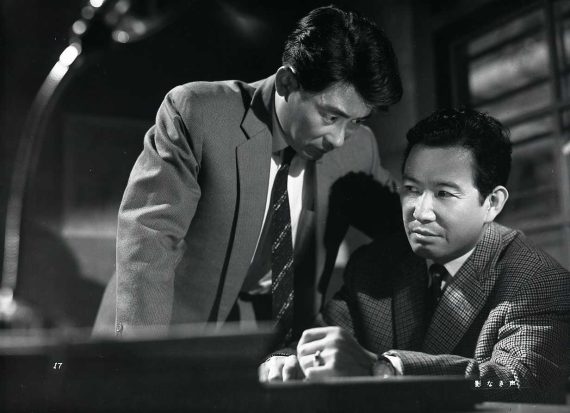 After being blown away by Seijun Suzuki’s Youth of the Beast just over a year ago and loving Tokyo Drifter and Branded to Kill, which I’d seen a while prior to that, I was most excited about watching this film from the set. While it’s not quite at the level of those titles (and I wasn’t expecting it to be), this didn’t disappoint and proved the strongest of the set in my eyes.

It’s not as stylistically wild as Suzuki’s better known works. In these early days he was still young and embedded in the rigid Japanese studio system. However, there are a few directorial flourishes that point towards his later films. For instance, there’s an unusual long take out of a car window that stays static for a while before unexpectedly moving and features a character practically looking right into the camera. There’s also a nice moment when a drunk character relates his story and you see the camera turn to a dutch angle.

I enjoyed the murder mystery story too. It’s a touch slower paced than some of the other Japanese gangster movies I’ve been watching recently, but it’s engrossing and kept nice and short. It’s classily produced too, looking great in its black and white wide frame and performed solidly by all the players. Good stuff.

Red Pier is a remake of the classic French crime drama Pépé le Moko (1937), which was popular in Japan at the time. It sees young gangster “Lefty” Jiro arrange a crane ‘accident’ on a pier, resulting in the death of restaurant owner turned drug dealer Sugitaya. Whilst police detective Noro (Shirô Ôsaka) tries to prove Jiro’s guilt and the slimy journalist Paku snoops around for a story, Jiro falls in love with Sugitaya’s sister Keiko (Mie Kitahara). On top of the obvious elephant in the room between them, Jiro’s now ex-girlfriend Mami (Sanae Nakahara) isn’t happy and she’s not the type of girl you want to get on the wrong side of. A nightclub dancer who’s admired by and well known amongst all the local gangsters, she finds herself in several situations when she can either help or hinder Jiro’s future.

Influenced by Hollywood melodrama almost as much as film noir, this got a little soapy for my tastes at times, but remained very enjoyable. The latter half pushes the love triangle aspect to the side a bit which helps and a rich vein of rebellious youth pervades, keeping things cool throughout. This is established quickly in the opening scene when Jiro’s reaction to Sugitaya’s death is a flippant “why can’t they be cool?” With characters constantly smoking, fighting, hanging around in bars or dancing to jazz music, the spirit of the newly discovered American teenager looms large. The catchy theme music also reflects this. 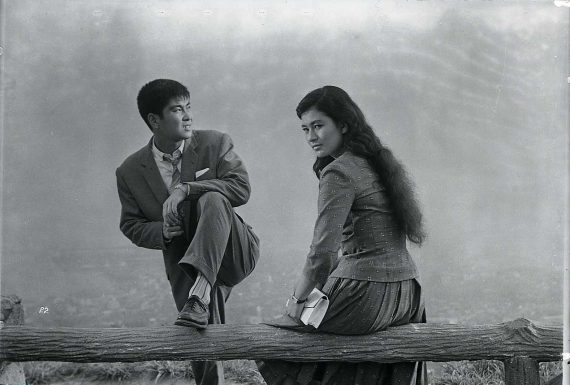 Once again the film looks very good. Shot in low key, high contrast black and white, its noir influences are clear, although daytime scenes are blasted with bright summer sunshine, largely to add some brightness to the central love affair. There are a couple of cool action set pieces too, including a nicely stylish standoff between Jiro’s brother Teko (Masumi Okada) and a hitman hired to kill Jiro, set against shimmering light reflected off the water beside them. There’s a nice use of real locations too, with some scenes set on a boat and a couple of shots set high up above the town, which is in full view below.

Overall it’s fairly straight forward and a tad melodramatic, but fun, slick and cool enough to remain something I’d recommend to fans of the genre.

Topping off the set is The Rambling Guitarist. It sees the titular young musician Shinji (Akira Kobayashi) arrive in the port town of Hakodate. He quickly gets into a fight with some American sailors which catches the attention of local kingpin Akitsu (Nobuo Kaneko). He tries to hire the young upstart, as he’s always after muscle for his gang. Shinji initially declines the offer, but, after another couple of fights, ends up taking it up. At the time, he also meets Akitsu’s daughter Yuki (Ruriko Asaoka) and the two fall for each other.

Shinji takes to Akitsu’s work with ease, until he becomes unsure about one job he’s assigned. Akitsu orders him to pressure the gang boss’ sister out of her house so he can turn it into an amusement arcade. There’s more to it than this though, as it turns out Akitsu is angry at his sister for turning down his arranged marriage and shacking up with a man he doesn’t care for. Shinji seems a bit unsure about the morals of carrying out such a job, so he hesitates. In the meantime, to further muddy the waters, an out-of-town gangster comes on the scene, Killer Jôji (Jô Shishido again), who recognises Shinji as the former police officer who shot his friend. 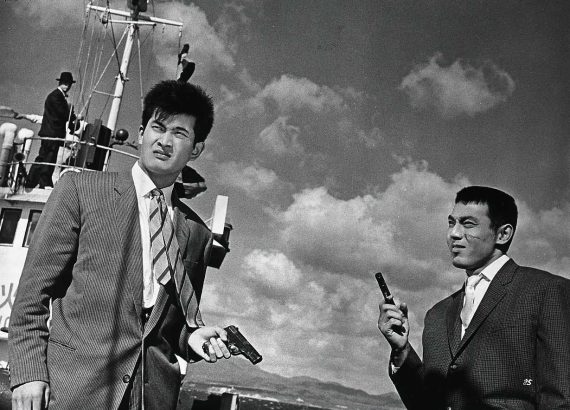 I enjoyed this too, but felt it was the weakest of the set. Like Red Pier, there’s a little too much melodrama for my tastes, with the romantic subplot and family drama dragging things down a little. It’s too short to get dull though and there are some decent action scenes here and there to keep you interested. The final showdown in particular is nicely over the top, as is a dramatic boat-set duel between Shinji and Jôji.

The film is clearly influenced by Hollywood westerns too, from the opening shot which sees Shinji arrive on a horse and cart with barren mountains behind him. This gives it an interesting slant when compared to the typical Japanese gangster movies. It’s shot in attractive pastel colours too, setting it apart from the other films in this set as well as a lot of the genre titles of the era.

However, the cheesy musical interludes and sappy melodrama let it down a bit, so it didn’t blow me away. There are some cool scenes here and there though and it’s enjoyable enough. It certainly wasn’t weak enough to prevent me from looking forward to Nikkatsu Diamond Guys Vol. 2, hopefully coming soon!

The Nikkatsu Diamond Guys Vol. 1 set is out now on dual format Blu-Ray and DVD in the UK, released by Arrow Video. I saw the Blu-Ray versions of all the films (where all 3 titles fit onto one disc) and they look and sound pretty good. I did notice a strange slight flash around the edge of frame occurring regularly though, on Red Pier most noticeably, but that may have been an issue with my screener.

There are just two special features of note, a couple of video discussions with Japanese cinema expert Jasper Sharp on Diamond Guys Hideaki Nitani and Yujiro Ishihara. Jasper really knows his stuff and provides a fascinating insight into the actors’ careers as well as some background on the films featured here.

You also get an attractively designed booklet filled with essays on the films and their cast and crew, which makes a great companion to the discs as always.