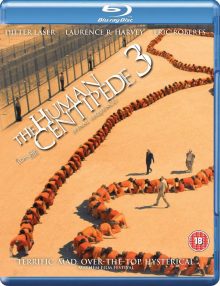 One’s enjoyment of the Human Centipede films very much depends on what sort of person you, as a viewer, are. If you are easily offended, have a normal ‘mainstream’ sense of humour, and enjoy ‘happy’ endings then none of these films are for you. If, however, you enjoy bizarre exploitation films, with a very black sense of humour, that deliberately go out of their way to push people’s ‘oh, god, not this’ buttons, then you’ll find something to appreciate in these films. I have not yet seen the original Human Centipede movie so I can’t really comment on that, but having seen the two sequels it seems to me that director and writer Tom Six is trying very hard to disgust his viewers and in this he succeeds admirably! Personally, I found the second film to have some points of interest, and I enjoyed Laurence Harvey’s excellent lead performance, but I found it a bit too ‘rapey’ to get any significant ‘enjoyment’ out of it.

Each film builds on what has gone before, with the first one being the original ‘mad doctor’ medical experimentation one; the second being the ‘obsessive fan repeats what he saw in the first film, but this time on a larger scale, and with increasingly messy and perverse results’ sequel; and this final part in this lose trilogy sees actor Laurence Harvey return, but as a different character, a Peter Lorre-like deputy (Dwight Butler) to an insane prison warden (Dieter Laser, out of the original film) who wants to save tax payers a lot of money by creating one massive human centipede out of the prison inmates in a high security American prison. 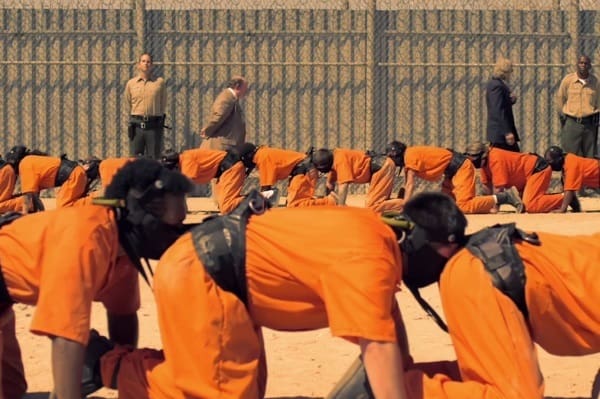 At first the quite batty prison warden, William Boss (Laser), refuses to listen to his ever sweating deputy, but after a minor riot he decides that his rather creepy assistant might have a point, especially now that the prison governor (Eric Roberts) is ‘on his back’ about all the discipline problems they’ve been having at this, the ‘George H. Bush’ prison. With most of the staff in his corrupt pocket, including the prison doctor, Bill Boss sanctions the centipede, with the idea that he’ll present this crazy 500-man creation as his own idea (sod poor deputy Dwight) when the governor returns to fire them both.

In amongst all this centipede nonsense Bill Boss has plenty of time to abuse and misuse pretty much everyone else in the prison, including his poor PA, Daisy (Bree Olson) who he sexually and verbally abuses – for example, he tells her to: ‘shut your pussy mouth’ and regularly calls her: ‘Tits’. A charming man, not! In fact, if there’s one reason to watch this film it’s for Dieter Laser’s completely over-the-top, force-of-nature performance, which comes across like Klaus Kinski on Crack, mixed with steroids and rocket fuel! Unbelievable! It’s just a shame (kind of?) that we can’t understand what he’s saying half of the time… 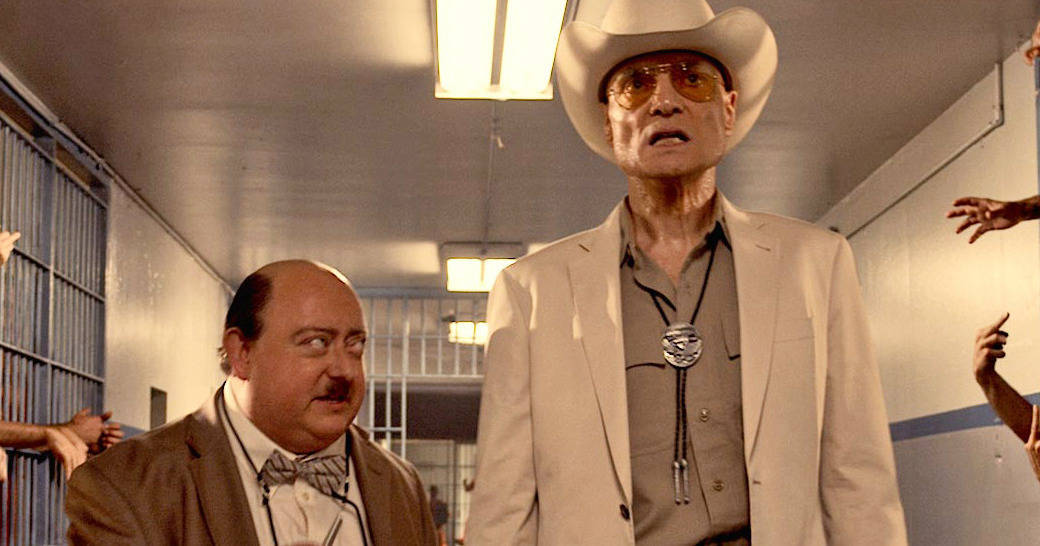 Overall the film is well shot and looks like a fair bit of money was spent on it; and it makes good use of its elaborate sets and the actual women’s prison location. The fairly subtle music score suits the visuals, and it’s nice to see Eric Roberts back in slimy Politian mode again, something which he does very well. He also gets my favourite line out of the movie, namely: Governor to warden: ‘You talk so much shit, your arse must get jealous!’

Human Centipede 3 is even more ‘Meta’ than the second one, as it kind of ‘eats’ the previous film’s central concepts, and reuses them in a knowing way. There’s obviously some intelligence in Six’s script, it’s just a shame that he goes out and out to offend pretty much every demographic on the planet and then some… He certainly knows how to write some very ‘colourful’ language and dream up some really unpleasant deaths and bodily abuses! I think having a prison inmate raping someone in their kidney and another singing the ‘death rape’ song are both new lows for modern cinema… Perhaps if Tom Six had focussed less on the Grand Guignol elements and more on generating a couple more sympathetic characters (only Olson’s PA is a decent person) Human Centipede 3 might have been something worth re-watching. As it is, it’s worth a (prison) visit, but only a passing one. 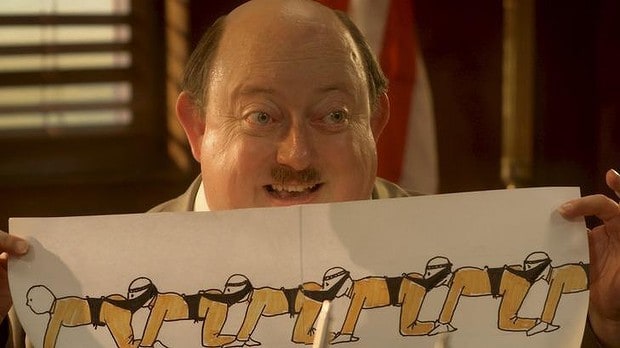 The Human Centipede 3 has recently been released on DVD and Blu-ray by Monster Pictures and the disc comes with a few extras including quite an informative making- of documentary, hosted by the very bubbly Bree Olson, where she walks us round the sets and talks to us about her own experiences, and there’s also an alternative ending, of which it’s easy to see why they didn’t use it in the end.