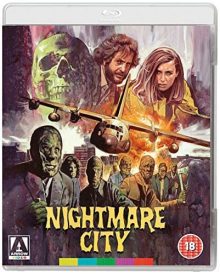 An accident at a nuclear plant leads to an outbreak of contaminated people quickly turning into a cross between a vampire and one of the ‘rage’ victims from 28 Days Later. These ‘infected’ people begin to attack healthy people and so a few crusty – faced infected rapidly turns into an epidemic of biblical proportions. On hand to report on all the mayhem is intrepid reporter Miller (Stiglitz) who is there at the airport when the original group of infected arrive and start killing everyone in their path. It seems that the nuclear accident has caused their cells to mutate and require fresh blood to replenish themselves, otherwise the infected will die an agonising death.

On realising that the proverbial shit has really hit the nuclear-powered fan, Miller rushes back to the hospital where his wife (Trutter) works as a doctor to make sure she’s okay, but unfortunately all hell has broken out everywhere, including at the hospital where victims of the original batch of infected people are rising to attack the medics and fellow patients. The two of them manage to escape, but where to go when the whole city has been affected, and even areas outside the city seem to be suffering too? 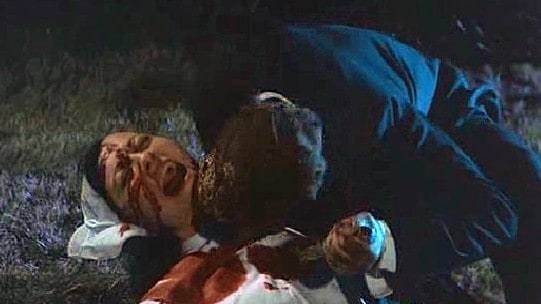 Nightmare City or City of the Walking Dead, as it’s sometimes known, is a mental film, and all the better for it. Starting off with one of the most iconic scenes in Italian horror cinema with a Hercules aircraft landing at an airport and unleashing its deadly cargo on unsuspecting police and army personnel, in a barrage of bullets and other assorted weaponry attacks, Nightmare City starts as it means to go on and never really lets up. It certainly cracks along at a very brisk pace, featuring one scene of mayhem and cheesy acting after another, and also featuring lots of very low budget gore effects and quite a lot of naked flesh, particularly female. In fact these vampiric creatures seem to have a thing about ripping open their female victim’s blouses, thus exposing their often ample bosoms, for no other reason but for gratuitous titillation. I’m sure the film’s intended audience of teenage boys and young men lapped it up on its initial release – and probably still do!

What the film lacks in subtlety and panache, it more than makes up for in overall energy, and in the enthusiasm of its eclectic cast. In fact the stunt work throughout the film must be commentated on as there are some excellent stunts to be seen, all of which look rather dangerous; and all delivered with lots of gusto and bags of energy. Underpinning the crazy, nutzoid visuals is a great score by Stelvio Cipriani, which also happens to be quite catchy and inevitably gets inside your head for days afterwards!

The film utilizes some cool locations, and the DoP does a good job of making it all look pretty decent. There was some damage to the print used here, but most of the weird markings on the film can only be seen in some of the earlier scenes, the rest looks pristine. The acting is reasonable for this kind of madcap movie, especially the two leads who really work hard to make the whole thing believable.

As one is watching the film you get a sense that quite a few directors have been taking notes, since the 28 Days/Months Later movies have borrowed a fair bit from this film, and I’d place a bet on it that Del Toro has seen this film too, as it certainly seems to have influenced his books and TV series, The Strain.

Often mistaken, quite wrongly, for a zombie film, Nightmare City is far greater than the sum of its bloodied body parts, and is very watchable, and rewatchable, for fans of trash cinema.

Arrow Films, who are distributing this film, have yet again done a great job at putting together this Nightmare package, which not only includes two versions of the film itself, but also plenty of juicy extras for fans to sink their canines into. These include: an interview with director Umberto Lenzi (29 mins), where he talks about the film in detail and touches on some other areas of his extensive career; an interview with uber fan, director Eli Roth, which is quite good fun, although he does reveal that he’s not a big fan of the rather ‘cop-out’ ending; a mini documentary on the restoration process for the film; the original trailer; the alternative opening credits, where it’s known as ‘Attack of the Zombies’; and there’s also a commentary with Chris Alexander.