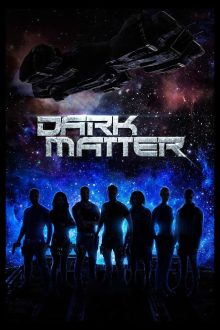 Well what can I say about this programme? This is a hard one to do as it was one of those that left me in two minds as to my final thoughts. I hope that through this review I will be able to explain why, as I highlight the pros and cons of this science fiction mystery adventure.

So what is Dark Matter? Well it is the brainchild of both Joseph Mallozzi and Paul Mullie who wanted to create a new addition to the sub genre that is space opera. It started its life as a comic book series published under Dark Horse Comics and only had a run of four issues. They were received well by scifi and comic fans, which is not surprising as Joseph Mallozzi was one of the main writers for some absolute classic sci-fi and fantasy programs including Stargate from season 4, The Busy World Of Richard Scarry and one of my favourite tv shows as a teen, Big Wolf On Campus. Also we have the writing style of Paul Mullie who is famous for his work on Stargate. It was picked up by both Space and Syfy to be created into this tv series. 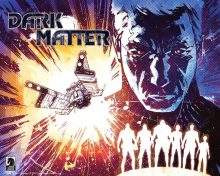 The plot is an interesting one that has been done before but not in this high a caliber. A crew of six awaken from stasis aboard a spaceship with no recollection of who they are or who their crewmates are. This is a series about finding out who they are as they fight to survive assaults from their old employers, the law and even old enemies. Amidst all that they also need to find out who wiped their memories. Could they have a traitor in their midst? As they do not remember their identities as they awaken they give each other numbers instead of names. I point that out as now I’d like to talk about the casting choices within this series.

First up we have Number One who is played by Marc Bendavid (Hard Rock Medical). He shows off his talents very well as he portrays the moralistic character who wants to be a good person in a time of great stress. Next up we have Melissa O’Neil (Broken Hearts) as Number Two, the captain who is trying to keep them all together. We also have Anthony Lemke (White House Down) as Number Three, Alex Mallari Jr. (Pay The Ghost, which I will be reviewing soon) playing Number Four, Jodelle Ferland (Cabin In The Woods) as Number Five, Roger R. Cross (24) as Number Six and finally we have Zoie Palmer (Lost Girl) in the role of the ship’s Android.

This series is very well made and I feel may even be a suitable successor to Firefly. It will be interesting to see how the second season will play out. This is one of those shows that focuses on character development for the story more than action packed space shooting. That is not to say that there aren’t action scenes in it and when the do come into play they are very well done and the CGI is very impressive. Now to explain why I’m left in two minds. On one hand it’s a well made show which is not afraid to focus on development of the story more than the high octane action that people these days expect. On the other I feel it is trying too hard to be like Firefly which is still top of my list of the best sci-fi programmes ever.

The best advice i can give is to watch this show and make up your own mind on this one.