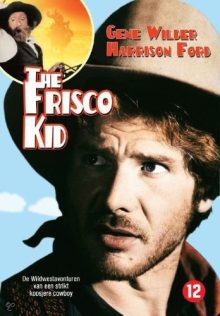 From the pedigree of cast and crew, you’d never believe The Frisco Kid would have become lost from our cinematic memories (although it is available in the US and some other European countries). As well as starring Gene Wilder at the height of his fame, it co-stars Harrison Ford as he was fast becoming a household name – released in-between Star Wars and Raiders of the Lost Ark. Added to this is Robert Aldrich in the director’s chair. A Hollywood mainstay since the 50’s, before this he’d directed a handful of classics, including The Dirty Dozen, What Ever Happened to Baby Jane?, Flight of the Phoenix and Kiss Me Deadly. So, with this team behind it and the fact that I’ve been on a winning streak of watching classic westerns over the last couple of years, I was fully expecting this to be a forgotten gem, ripe for re-approval. How wrong I was…

The Frisco Kid opens in 1850 with newly ordained rabbi Avram (Wilder) being sent from Poland to lead a Jewish community in San Fransisco (“somewhere near New York” according to the rabbi elders who just want to get rid of him). He arrives in Philadelphia first and is due to travel by ship to his destination, but the gold rush has struck, meaning the ship is full and has cast off already. The next one won’t arrive for a couple of months, so Avram decides to travel by wagon with some friendly traders wishing to see their mother before she dies.

Avram soon discovers that these traders aren’t so friendly after all though and they kick him off their wagon with only the shirt on his back and his Torah. He trudges on by foot until he is assisted by some Amish folk who look after him and send him on his way. Eventually he meets up with bank robber Tommy (Ford), who takes pity on the bumbling rabbi and offers to guide him to San Francisco. With Avram’s inexperience, his inability to work or even ride on Saturdays due to his beliefs and with Tommy’s insistence on robbing banks, the pair get in all sorts of trouble en route. 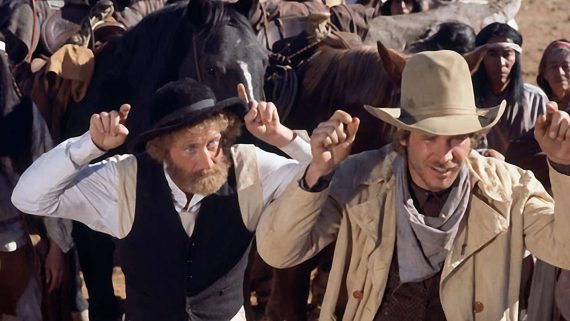 It all sounds like the recipe for “a hilarious pistol packing Wild Western romp” as the video cover puts it. However, the film fails on so many key levels that it never lived up to its promise. The biggest issue is with the film’s tone. It doesn’t seem to know where to pitch it. It’s marketed as a riotous comedy, but is woefully unfunny and spends more time playing with more dramatic issues of faith and race. I wouldn’t mind this usually, but I didn’t find any of the content particularly enlightening or interesting. It’s just filled with trite moral messages and PC pussyfooting around various races and religions. When this is matched with clumsy visual and verbal gags, any hope of thematic depth is dashed anyway.

My other major problem was with how flat and dull everything is. There’s very little threat or drama. Everyone is just really nice to one another. There are a few cheap jibes at Avram’s expense here and there and the pair occasionally get into trouble, but they always seem to easily get out of it, generally due to some over-friendly minority group.

Ford’s charisma helps keep things watchable and Wilder is OK, although his usual energetic shtick is held back here and he doesn’t seem to know what to do with his character. There are a couple of jokes that work, particularly Avram’s insistence on not riding on a Saturday, even when a posse is on their tails, but one or two laughs aren’t enough to save this wet lettuce of a film though. So I think you can guess what judgement I’m going cast on this…

* I discuss this film in more detail with Todd Liebenow on his podcast, The Forgotten Filmcast.