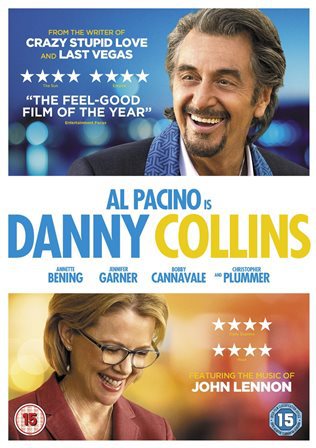 It’s sad but inevitable when the greatest actors of their generations, stars of the landmark masterpieces of their respective eras, slowly degenerate into merely adequate performers in often execrable films. I’ve watched it happen to Robert De Niro and Dustin Hoffman and, given their achievements throughout the previous decades, I’ve said fair enough. But while we accept these declines as well-earned working retirements, we never give up hope of at least a small resurgence, the sort of late-career role that temporarily rekindles the flame of genius. It happened for Gene Hackman with The Royal Tenenbaums and for Jack Nicholson with About Schmidt. But there are few actors I would rather see this happen for than Al Pacino, whose run of Oscar defeats for astonishing performances throughout the 70s (as well as for a cracking supporting performance in 1993’s Glengarry Glen Ross and a baffling nomination for his brief, cartoony turn in Dick Tracy) was capped by an Oscar win for his over-the-top hamminess in Scent of a Woman, which sadly had the effect of enshrining this performance as one of his best-known roles.

I’ve always thought that Pacino had the greatest potential of any of his contemporaries to rediscover his brilliance if only the right role came along. Early reviews of Dan Fogelman’s Danny Collins seemed to promise just such an opportunity and yet I was also sceptical of Pacino’s ability to convincingly portray a rock star. Sadly, my scepticism was justified and it proved to be only one problem with a film that has great promise but manages to drop the ball fairly consistently. In contrast with Pacino, writer-director Fogelman is still at the beginning of a promising career and while his scripts so far have been hit-and-miss affairs, they also have a pleasing lightness of touch that usually offers an enjoyable experience on some level. Danny Collins, Fogelman’s directorial debut, isn’t without bright spots but it is also written with such an apparent dearth of knowledge and experience about its rock ‘n’ roll subject matter that for anyone with an interest in music the material will ring hollow right from the outset. 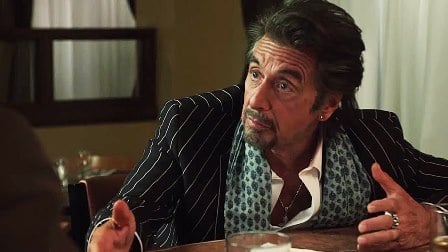 Loosely based on the true story of Steve Tilston, a singer-songwriter who received a letter addressed to him by John Lennon and Yoko Ono 34 years after it was written, Danny Collins reimagines Tilston’s career trajectory as an ascent to superstardom at the expense of dignity, artistic credibility and physical and mental well-being. At the beginning of the film, Pacino’s Danny is a jaded rocker whose fanbase consists largely of aged women who are apparently only there to hear his biggest hit ‘Hey, Baby Doll’. When his cynical but devoted manager Frank (Christopher Plummer) tracks down a letter written to Danny 34 years previously by his idol John Lennon, it triggers a redemptive impulse in him which causes him to halt his current tour, break it off with his unfaithful trophy girlfriend, kick the drug habit and go in search of the son he has never met. But reconciliation doesn’t prove easy with a son who hates him for his abandonment and though he makes inroads by way of helping out his family, Danny ultimately discovers that his son has greater problems than the sudden reappearance of his famous father.

An unassuming premise for a film is thoroughly undone by an apparent lack of the most basic research coupled with a bad piece of miscasting in the central role. While any first time director would be thrilled to get Pacino as their leading actor, the part of Danny Collins is clearly unsuitable for him from the moment he first takes to the stage for an embarrassingly unrealistic performance which is thankfully not dwelled upon too long. The brevity of this sequence seems to betray an awareness that Pacino does not make the most convincing rock star, and yet the film badly needs more footage of Danny doing his thing on stage or maybe a few archival music videos, just something to remind us that this is apparently a huge musical star and not just a great actor playing dress-up. This is why casting is so crucial and why Pacino should have been vetoed at an early stage. To be fair, he does not give a bad performance and his exuberance and potential are clearly still alive to be tapped into by the right role. But he looks thoroughly uncomfortable every time he picks up a microphone or sits at a piano. 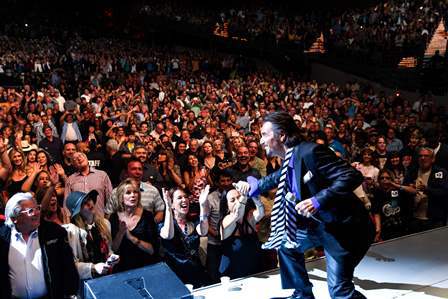 The parallel personal and artistic rejuvenation of Danny Collins should be central to its emotional power and yet neither works particularly well. When Danny first meets his son, he flatly tells him that he ripped up the cheques he sent to him. Here is a principled man undazzled by his father’s fame and fortune. Yet Danny then batters his way into his life by using his money and influence to get an interview at an otherwise inaccessible special school for his ADHD-afflicted granddaughter. And this is one emotionally-manipulative cheque his son doesn’t mind cashing. As an example of what a swell guy Danny is when he’s not acting like a rock ‘n’ roll asshole, this is totally inadequate and slightly offensive. But it sets him on the way to developing a relationship with the son he abandoned on only his second meeting with him. The fact that he turns up in his son’s suburban neighbourhood on a tour bus emblazoned with his own face doesn’t seem at all in bad taste to anyone!

If this emotional renaissance is unconvincing, Danny’s attempt to recapture his artistic potential is even worse. He writes one slow piano ballad which is supposed to be something special but is in fact instantly forgettable, then quickly arranges an intimate gig to try it out. It would have been far more convincing to see him working up enough material for a new album before he did this, with the added bonus that the film could have gotten away with playing a series of small snatches from promising-sounding material rather than pinning all its hopes on one dreadful song played in its entirety. But in its hurry to get to its emotional peaks, Fogelman’s script rushes us through to the concert sequence in which we see Danny battered into submission by an unrealistically disrespectful audience who all holler out for him to play ‘Hey, Baby Doll’. The ubiquity of this one hit for an artist who apparently has three volumes of greatest hits albums is entirely unrealistic, as is the crowds expectations that he will play it immediately (although the opening gig sequence in the film sees him doing just that, showing no understanding of how most bands structure their setlists). Danny’s instantaneous spiral back into drink and drugs after this one flop is another example of Fogelman’s desperation to jump from one big emotional moment to another at the expense of realism.

If the fictional music in Danny Collins is poorly realised, the real music is used even more ham-fistedly. The film sells itself not only on a star name that is unsuited to the lead role but also on the fact that it features a soundtrack of hits by John Lennon. These brilliant Lennon songs, however, are used far too predictably and seem slapped onto the film rather than naturally woven through it. So the moment when Danny receives the letter from Lennon dissolves into, you guessed it, ‘Imagine’, a song that has been so over-used that it is almost impossible to make it work on a soundtrack, let alone at one of your pivotal emotional plot-points. When Danny falls off the wagon and starts using cocaine again, Lennon’s ‘Cold Turkey’ emerges on the soundtrack with all its shatteringly blunt literal implications. The Lennon songs only rear their heads for about 30 seconds a piece in most cases, making them seem even more like a rushed afterthought and robbing them of any emotional influence they may have otherwise had. This just sounds like a jukebox of tracks Fogelman liked and wanted to crowbar in at some point. It makes it all the worse that, from the little we hear of his material, Danny Collins betrays no Lennon influence whatsoever. 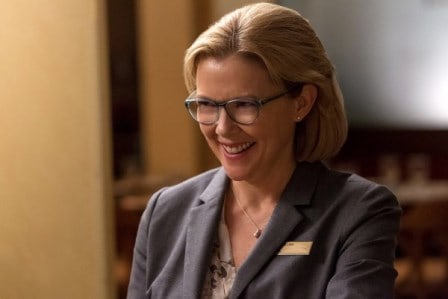 For all its many errors, Danny Collins manages to get one thing right. The relationship between Danny and hotel manager Annette Bening is left as a friendship with a budding potential of romance (more on his part than on hers) which ultimately comes to nothing physical but leaves an impression on both parties. In this, Fogelman manages to ignore the cries for ‘Hey, Baby Doll’ of his own audience, offering a realistic alternative to expectations which is the best thing in the film. Christopher Plummer, as Danny’s straight-talking manager Frank, also does some good work although too often he is saddled with awkwardly obscene dialogue due to the misconception that an old man spouting obscenities is funny in and of itself. Frank’s devotion to Danny is touching but underexplored, making his final pivotal speech about bottled water a nice piece of writing that belongs in a different, more considered film.

With Danny Collins, Fogelman has clearly tried to write something with more emotional weight than perhaps his most famous script for Crazy, Stupid, Love but ultimately his dramatic moments rely on cliché and subject matter already better explored elsewhere. The climactic scene of the film is the prime example. From the moment Pacino begins his final long speech, it is completely obvious how the rest of the scene will play out and I watched it unfold before my eyes almost exactly the way I had envisaged. While for some viewers this sort of comforting predictability will please, Danny Collins seems like a film that was striving for more at the outset and eventually just gave up and played the hits.

Danny Collins is released on DVD BY Entertainment One on 5th October 2015. Extras include a behind the scenes documentary and a strange, half-baked mock up of Danny Collins’s album covers down the years, using archive photographs of Al Pacino.