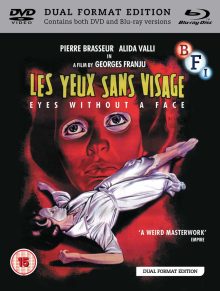 Due to my interest in classic film, I’ve often reviewed titles here that I’ve wanted to watch for a long time after hearing a lot of praise for them. Eyes Without a Face (a.k.a. Les yeux sans visage) is a curious twist on this though. Back in the early days of my blossoming love of film, I’d heard much about this and at some point I did get a chance to see it (if I remember correctly I’d taped it off TV). Now, this is where my memory gets hazy (it was a long time ago); I remember starting to watch it, but not getting very far and giving up. I’m not totally sure why. I have a vague notion that it wasn’t what I was expecting and looked a bit dull and pretentious. Watching the film in its entirety now, I’d be surprised if that was the case, but for whatever reason I never got further than the first 10 minutes or so.

15 or so years down the line, I’d forgotten why I didn’t get into Eyes Without a Face and my urge to watch the film had grown again. The BFI offered me a screener of their new re-release of the film on Blu-Ray and I snapped up the chance. Of course I watched the whole thing this time, but was I still disappointed?

Eyes Without a Face follows the brilliant surgeon Dr. Génessier (Pierre Brasseur) and his assistant Louise (Alida Valli) as they kidnap young women in the night. The ladies are brought to the doctor’s secluded house where he lives with his daughter Christiane (Edith Scob). Her face has been severely disfigured in a car accident when her father was driving. Feeling guilty for this, the doctor vows to give her back her beautiful face. The kidnapped women are to provide this for him, as he uses them to provide facial transplants. After the first is unsuccessful, the doctor becomes ever more determined and the death toll and psychosis increases.

In the meantime, Christiane becomes ever more desperate to leave the house she has become trapped in. Her father had faked her death using the body of one of his victims, so Christiane must remain in hiding. Her dilemma becomes one of deciding which she wants more, her face or her freedom.

After finally watching the film, I’m surprised I switched it off previously. It wasn’t perfect and I’m not sure it fully lived up to expectations, but what did strike me was how much of a straight up horror film it was (for the most part). Due to its age, nationality and acclaim I presumed it would be more of a subtle influence on modern horror films; a bit eerie perhaps, but more of an arty psychological horror. It certainly has psychological horror elements and is hardly your standard slasher movie, but Eyes Without a Face was a lot more gory and disturbing than I expected. One of the face transplants is shown pretty much in its entirety. The camera doesn’t turn away from the scalpel slowly cutting away the face and separating it from the skull. It’s a surprisingly effective makeup effect too, which had me squirming in my seat. 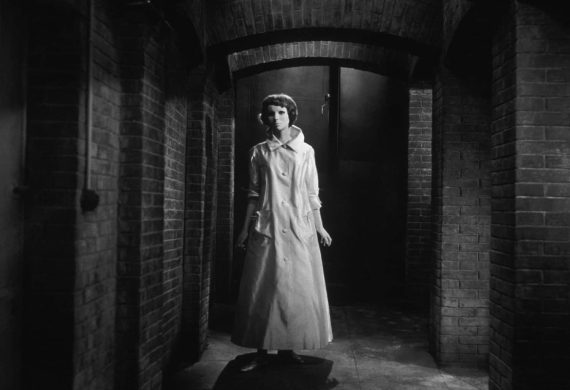 That said, the film is quite slow-moving. The plot is very simple, it’s pretty much just what I described above. An investigation into the kidnappings comes into play too, but this isn’t particularly elaborate – it doesn’t take much to suss out what is happening. Seemingly unimportant shots are often drawn out too, to keep the film feature length despite its minimal narrative.

This slow drift through the film is part of its gothic fairy tale charm though and the commentary suggests that Director Georges Franju lingered on odd shots purposefully to cause unease. It has a dream (or nightmare) like quality to it. The Christiane character seems to float around the house in her nightgown. She also wears the film’s iconic plain white mask which, when added to the movement, makes her seem like a ghost. It makes for some haunting imagery. The mask is as beautiful as it is unsettling, perfectly embodying the film’s unusual tone.

The film in general looks gorgeous, despite the horrors on display. Franju and cinematographer Eugen Shuftan craft some elegant shots with shadowy lighting and meticulously framed mis-en-scene.

The soundtrack by the great Maurice Jarre, early in his career, is quite unusual. It sounds a bit like creepy circus music, which at first seems like an odd fit for the dark, drifting horror on display, but it adds a surreal edge to proceedings.

It’s a peculiar film that, I must admit, didn’t blow me away, but did creep under my skin as it went on and is undoubtedly masterfully crafted and surprisingly disturbing 55 years on. It’s a clear influence on countless films, in particular Pedro Almodovar’s The Skin I Live In and some of Cronenberg’s less bombastic body-horrors. I’m glad I finally re-watched the whole film and I can’t for the life in me understand why I gave up on it so easily before.

Eyes Without a Face is released on dual format Blu-Ray and DVD on 24th August in the UK by the BFI. I watched the Blu-Ray disc and the film looked and sounded great.

There are quite a few extra features included. There are two early short films from Franju, Monsieur et Madame Curie and La Premiere nuit. There’s a well produced 50 minute documentary on his work – largely focussing on Eyes Without a Face. Edith Scob is interviewed about her work with the director and finally, you get a feature length commentary with film critic Tim Lucas. This is great. Lucas always delivers incredibly well researched and rich commentaries and the inclusion of this in the set is more than welcome.