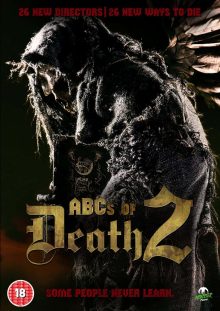 After the success of the first ‘ABCs of Death’ horror anthology film back in 2012 I guess it was inevitable that a sequel would come along sooner rather than later. Each of the 26 segments is helmed by a different director, who was assigned to a letter of the alphabet. Apparently the directors were given free range, by series creator Ant Timpson, as to which letter they chose, although I guess it must have been on a first come, first served basis! Each short film covers a different way of shuffling off this mortal coil, with some surprisingly inventive and amusing ideas.

Following a nicely done title sequence with some rather Goblin – like music, A is for Amateur (directed by E. L. Katz) was a good way to start, which saw a man dreaming about successfully killing a gangland boss, but things don’t go to plan when he gets to do it for real and he becomes stuck in the air vents!

B is for Badger (Julian Barrett) was an amusing skit (in a ‘Monty Python’ kind of way) about a nature programme that goes horribly wrong, while C is for Capital Punishment (Julian Gilbey) was a rather disturbing short where the wrong man is beheaded by a mob when a local girl goes missing.

Deloused was a very yucky and surreal animated short by ace animator Robert Morgan, while Equilibrium, by Alejandro Bruguệs, sees two shipwrecked mates falling out over a latterly shipwrecked female with amusing results.

One of my favourites was F is for Falling (Aharon Keshales and Navot Papushado), which finds an Israeli airwoman stuck in a tree at the mercy of Palestinian rebels.

G is for Granddad (Jim Hosking) has us witness to a very weird encounter between a young man and his demented grandfather, while Head Games (Billy Plympton) is a strange animation featuring two lovers blowing each other’s heads up!

I is for Invincible (Erik Matti) has a rather strange family trying to kill their 120 year old grandmother for her inheritance, while Jesus (Dennison Ramalho) is quite a stylish short that features a gay man being tortured by those who think he’s possessed. 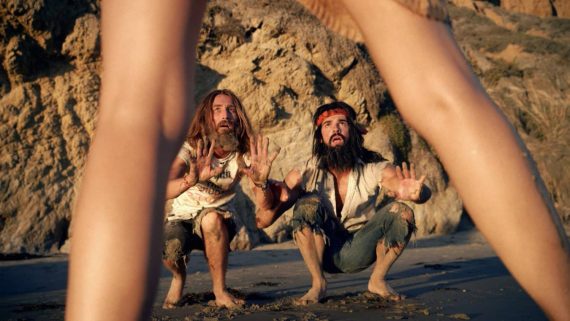 Knell, by Kristina Buozyte and Bruno Samper, is a rather creepy short about a girl who witnesses a weird globe-like thing hovering about near a building, which causes everyone to become killers, while in Legacy (Lancelot Imasuen) an African tribesman refuses to execute a warrior and causes a demon to appear.

Robert Boocheck’s Masticate plays out what appears to be a slo-mo zombie attack, but is in fact mass craziness/hysteria due to some gone-off bath salts!

Nexus, by Larry (Wendigo) Fessenden sees Halloween revellers getting involved in an accident, while O is for Ochlocracy (Hajime Ohata) and features a world where the zombies are now in charge and the execution of humans is common place.

P is for P-P-P-P SCARY! (Todd Rohal) tells a strange story where two brothers and their dad are lost in a dark underworld, where a weird man keeps appearing out of the darkness to blow out their candles; as you do!

The quirky Questionnaire, by Rodney Ascher, has a man, who kindly agrees to stop and do a questionnaire, later having his brain transplanted onto the body of a gorilla. 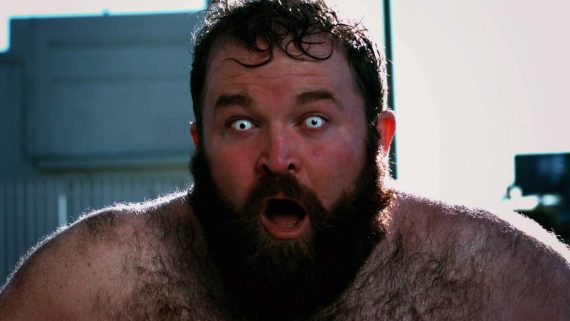 Roulette (Marvin Kren) features Germans playing Russian roulette in a basement, not for a chance to live, but to die to protect the group from what is outside the subterranean room. And S is for Split (Juan Martinez Moreno) sees an intruder break into a house to kill a wife and baby while the husband has to listen in to what is happening on the phone. This features a nice twist too.

Utopia, by Vincenzo Natali, finds us witnessing a bright and shiny future world where only beautiful people are allowed to survive – a more normal looking bloke is incinerated in a public place, while the ‘beautiful’ people look on, just for, well, being average looking!

V is for Vacation (Jerome Sable) has us following two lads in Thailand as they party with a whore, only to find she turns on them murderously while one of them is on the phone to his girlfriend pretending that he’s being faithful. Meanwhile, in Wish (Steven Kostanski) another two lads find themselves sucked into a cool retro video game with devastating consequences.

X is for Xylophone, by Julien Maury and Alexandre Bustillo, and sees a babysitter losing the plot and later using a little girl’s body as an instrument, while Youth (Soichi Umezawa) sees a teenage girl imagining killing her brother and mum because they keep asking her to run errands for them – we’ve all been there!

And, finally, Chris Nash’s Zygote features a disturbing case of pregnancy and incest – a really f**ked up way to end the anthology, I’m sure you’ll agree.

I’m not going to rate each of these shorts in turn, but just to say that I found most of them to be of a decent standard and overall this follow-up to the 2012 original film is a step up in quality in both writing and in film-making. A few of the shorts here don’t work as well as they should do, but for the most part the short films are all entertaining and a few are even thought-provoking.

The standard of acting and photography are variable, as one would expect from any anthology movie, but generally the filmmakers have succeeded in getting their bloody and horrid points across…

I would certainly recommend this follow-up film to those horror fans that really enjoy the shorter format, as I do. In fact I would say that along with comedy, the horror genre tends to work better in a shorter, punchier format, rather than being drawn out to feature length. 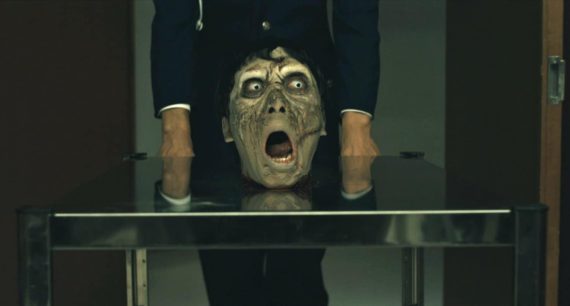