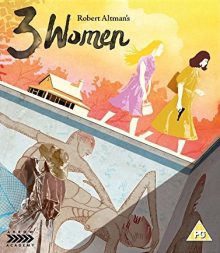 1977’s 3 Women came at the end of Robert Altman’s ‘golden age’ in the 70’s. Prior to that he’d found success with the surprise hit M*A*S*H* at the start of the decade and followed it up with classics like McCabe & Mrs. Miller, The Long Goodbye and Nashville. There were a few curiosities in between, such as Buffalo Bill and the Indians, but largely he could do no wrong. 3 Women was divisive (usual Altman champion Pauline Kael wasn’t a fan), but it still won a fair few awards (mainly for the performances) and had its followers. After that, he began a decline into his ‘troubled’ 80’s period when he fell totally out of favour before coming back with a few masterpieces in the 90’s (alongside some more clunkers).

I wouldn’t necessarily say that the production or reception of 3 Women caused his decline, but it’s a very unusual film, even by Altman’s standards. Perhaps it shows him getting frustrated and trying to do something completely new. His previous films had notable differences, but most of them had an ‘Altmanesque’ style and feel, with anarchic overlapping dialogue, often quite large casts and a need to subvert film genres or American ideals. There are hints of some of these characteristics in 3 Women, but it feels more like an art film from a European director. Supposedly Altman was influenced by Ingmar Bergman’s Persona and there are certainly similarities in style as well as content.

3 Women opens with Pinky Rose (Sissy Spacek) starting a new job in a rehabilitation spa in California. Millie (Shelley Duvall) is asked to show her the ropes and you see Pinky quickly develop an obsessive admiration or possibly desire for the woman. Millie is lonely and deluded. She acts like she’s living the perfect existence of a modern woman with her designed apartment and her regular dates and dinner parties that never actually happen.

Pinky moves in with Millie and although Millie at first seems happy having a devoted friend, she soon grows wary of Pinky’s unsettling interest in her. Their relationship becomes strained, coming to a head when Pinky tries to kill herself. Millie, feeling somewhat responsible, helps nurse her back to health, only to find that Pinky has completely changed, becoming the modern woman she yearns to be herself.

Lurking in the background of all of this is the third woman, Willie (Janice Rule). She’s the pregnant wife of Edgar (Robert Fortier) and the two of them own and run the apartment block where Pinky and Millie live, as well as an attached saloon and run down theme park. Willie spends her time painting huge, unusual murals everywhere which seem to depict disturbing animalistic versions of the key characters in the film. Her husband Edgar is a sleazy ex-stuntman who is sleeping with Millie and eventually Pinky, so of course causes further problems amongst the group.

Altman claims 3 Women came to him in a dream. There are various opinions of what happened in it so I won’t try to claim to know, but the resulting film certainly feels like a dream. It’s slow and unusual and the plot can’t always be clearly deciphered (particularly the puzzling coda). Because of this it’s easy to see why it’s quite divisive. Personally I was thoroughly engrossed though. Even in the opening minutes, the film has an uneasy mood that is carried through effectively through the whole film. The cinematography seems more carefully planned than in Altman’s previous work and there are some interesting visuals, occasionally shooting through water to eerily beautiful effect. The atonal score by Gerald Busby greatly helps the mood too. I think it was the first time Altman had stuck solely to composed music like this. His previous films had used rock/pop songs and folk music, so again it was showing a departure for the director.

This moodiness makes the film seem almost like a horror film or thriller at times, even though there’s no real on-screen violence. There’s comedy in the film too though. There’s a running gag of Millie constantly talking, but no one (other than Pinky) ever paying her any attention. This is actually rather sad when you think about it, but it has an uncomfortable humour to it too.

The biggest success in the film can be seen in the performances though. Duvall and Spacek are brilliant throughout. I largely know the former from her vaguely useless role in The Shining so I didn’t usually rate her as an actress, but this proves that in the right film and with the right director (she worked with Altman a lot to great success) she could be excellent.

The film does falter in its finale and coda though. There’s a dream sequence near the end which is effectively presented, but goes on a bit too long and feels unnecessary when the film is quite dreamlike anyway. The climactic birthing scene that follows is rather disturbing, but some unnecessary dialogue at the end spoils it slightly and the sudden jump to a coda afterwards is jarring. It’s this final section that divides opinion more than anything in the film. It’s not clear what Altman is trying to say, which isn’t necessarily a problem, but it makes for a baffling conclusion that could have been better integrated.

Taking the film as an intriguing, dream-like mood piece, it’s excellent though. Some fantastic performances and a well sustained feeling of unease make for a memorable, if perplexing, watch.

3 Women is out on 13th July in the UK on Blu-Ray, released by Arrow Academy. As usual, Arrow doesn’t disappoint with the picture and sound quality.

There aren’t a lot of features, but what is included is great. There’s an archival 6 min interview with Shelley Duvall at the Cannes Film Festival where she’d just won an award for best actress. This is short but rich with information about working with Altman, who she had a lot of praise for.

The main feature is a 37 minute interview with the renowned critic David Thompson, who is also the editor of ‘Altman on Altman’ and producer of the BBC’s ‘Robert Altman in England’. This interview is excellent. It’s incredibly well researched, delving into the production and reception of the film and provides some food for thought on the possible meanings to be take from it.