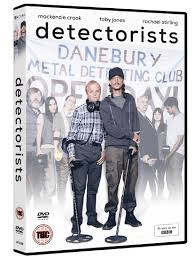 The British sitcom has reached something of a strange place in 2014. The most popular programmes in the medium seem to be backwards-looking, raucous but emotionally unengaging melees of slapstick and empty one-liners, such as Miranda, Not Going Out and Mrs. Brown’s Boys. These are the sort of barrel-scraping shows that were so deftly parodied by Ricky Gervais and Stephen Merchant in the second series of Extras, and yet Gervais and Merchant have also plumbed the depths with their abysmal Life’s Too Short. It was Gervais and Merchant who created the greatest British sitcom of the 21st century so far with The Office, a keenly observed spoof documentary which found room for both the comedy of social embarrassment and genuine warmth towards it characters, which was crucial in keeping viewers interested as the well-developed story-arcs unfolded. The Office was a culmination of the influences of a glut of excellent 90s and early 00s comedies which reshaped the genre by taking it to darker and more depressing places. Whether it was the desperation of rapidly vanishing celebrity dissected in I’m Alan Partridge, the surrealist depiction of a life in exile in Father Ted or the suppressed mental collapse of an outwardly optimistic divorcee in Marion and Geoff, these sitcoms rewrote the rules and made it ok for comedy to make us feel bad even as it made us roar with laughter.

The downside of these new comedy series was that they inevitably spawned a deluge of inferior imitators that misunderstood the delicate balance required to make them work, resulting in mean-spirited, one-dimensional shows populated by thinly-veiled variations on The Office’s David Brent. Brent’s inadvertently offensive oratories were always minutely worked out and softened by his well-meaning intentions, even as his self-serving agenda added further layers to the character and his motivation. Filtered through the minds of lesser writers, this became an excuse to have characters spout reprehensible things under the dubious façade of indelicately realised irony. It’s little wonder that writers began returning to more traditional styles of comedy if this was to be the path the new wave of sitcom was starting to follow. It was The Office that again bucked the trend with its climactic Christmas specials in 2003, which gently switched the ratio of social embarrassment and heartfelt affection for its characters, leaving viewers with an emotionally satisfying and surprisingly optimistic climax. This was not to say that a happy ending was now mandatory (I’m Alan Partridge ended with the symbolic mass-pulping of Alan’s autobiography while Father Ted finished with the character seemingly trapped in his own personal Hell for all eternity) but the success of The Office Christmas specials certainly seemed to open up the option for those who might previously have balked at the potential of being accused of sentimentality (for the record, Marion and Geoff ended with an even more effective and unexpected moment of melancholy-tinged optimism and did so several months prior to The Office’s denouement).

One of the things that made The Office work so well was the perfect casting. One of the most memorable performances was that of Mackenzie Crook as Gareth Keenan. Prior to this career-making turn, Crook was most famous for being co-presenter of the dreadful Eleven O’Clock Show, a short lived topical comedy series. Crook always seemed uncomfortable in this role but as Gareth Keenan he displayed an obvious talent for incisive characterisations. Although this early break won him high profile roles in the Pirates of the Caribbean franchise and subsequent big-screen appearances in Finding Neverland and The Brothers Grimm, Crook’s credibility as an instantly recognisable face of British comedy quickly slipped as his subsequent ventures included the poorly received Sex Lives of the Potato Men and Three and Out. Perhaps as a pro-active attempt to reverse this downwards spiral, Crook set about writing, starring in and directing his own new sitcom. The venture may not have sounded immediately promising, with Crook’s only previous writing credit being on some episodes of the weak animated comedy Popetown, but news that Crook’s co-star in the series would be the always excellent Toby Jones and that the series was being made for the highbrow BBC4 piqued critical interest and when episodes finally began to air it didn’t take long to realise that this was a prestige project with the potential to emulate the slow-burning success of The Office, which only crossed over from a critical to a commercial success after some fortuitously timed repeats. 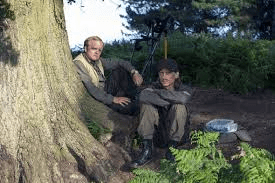 I’ve mentioned The Office a lot in this review already but before I go any further I feel I should categorically state that Detectorists, the results of Crook’s labours, is not even remotely similar to Gervais and Merchant’s masterpiece. A good deal of the early reviews for Detectorists have compared it to The Office but this is a lazy and unfounded assessment surely based largely on the prominent presence of Crook and also on the fact that for the last decade there has always been a critical tendency to compare all non-traditional sitcoms to The Office whether they bear comparison or not. Detectorists, in fact, is quite a unique sitcom which often feels more like a low-budget British film, albeit one allowed a significantly longer time to play out than most. Comparisons do occasionally spring to mind. Some of the purposefully aimless dialogues between Crook and Toby Jones, as the metal detector enthusiasts Andy and Lance, recall the famously trivial conversations of Jerry Seinfeld and George Constanza in Seinfeld, while some of the early episodes have moments which evoke the best bits of Gavin and Stacey, one of the sitcoms most indebted to the post-Office (!) trend of adding feel-good sentiment into the mix, something which Gavin and Stacey did liberally. But ultimately, Detectorists is its own show and hopefully one which will spawn some similarly well-judged and delicately written offspring.

Detectorists follows the low-key adventures of Andy and Lance, two detectorists (as they insist on being called) who are determined to find a Saxon burial ground which they have become convinced is beneath a local field owned by a barmy farmer. This ongoing quest must be juggled with their personal lives, as Andy tries to keep a hold on his tenuous relationship with his outspoken girlfriend Becky and keep his own fascination with newcomer Sophie in check, and Lance attempts to win back the affections of his ex-wife who has left him for a meat-headed layabout. Throw in the unwanted attentions of rival detectorist group The Antiquisearchers and the uncertain future of Andy and Lance’s own detectorist group and there’s much standing between the two unlikely heroes and their buried treasure.

Detectorists is an extremely impressive debut for Crook as both sole writer and director and it is no great criticism therefore to say that he does a better job in these roles than in the acting stakes. As Andy, Crook makes a likable and believably flawed central figure and in many scenes he is great but occasionally he gives curiously flat line-readings in the middle of otherwise fine scenes. It’s one of the very few distracting things in this otherwise terrific series but fortunately Crook’s co-star Toby Jones has no such wobbles. Jones has quickly established himself as something of a British institution and his reliable excellence is on full show here, making Lance a believable and sympathetic character, even as he frequently shows himself to be, as one character puts it, ‘a bit of a dickhead’. Also excellent in the supporting roles are Rachael Stirling as Andy’s mouthy but comparatively patient girlfriend Becky, Gerard Horan as Terry, the president of the detectorist club and Sophie Thompson as Sheila, Terry’s batty wife. 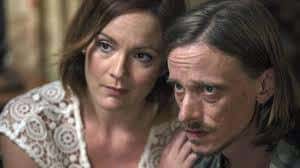 Detectorists is a series that rewards patience, as part of the plot relies on establishing what a repetitive and unrewarding activity Andy and Lance’s quest really is. As a result, very little seems to be happening plot-wise by the end of the second episode and, while Crook compensates for this with plenty of great dialogue, the series seems to be in danger of becoming repetitive. Fortunately, this impression is completely erroneous and episode three moves the plot on considerably, a change in pace which is kept up for the remainder of the series. Likewise, there are elements of the early episodes which pay off in later ones, such as a running gag about a mad farmer with invisible dogs which initially seems like a half-hearted stab at surrealism but which is cleverly subverted in the final episode. Crucially, for all their flaws, Crook’s characters are easy to identify with and root for and he sidesteps the mean-spiritedness which characterises so many failed sitcoms. Only one scene, in which a pub quiz falls in favour of alpha-male Terry, feels a little cruel as it is essentially made up of a list of categories which Crook equates with idiots, including sport, lads mags and ITV2. While viewers may find themselves agreeing with Crook’s list, it’s the one moment in Detectorists where the comedy is based on eye-rolling at others rather than smiling in recognition at shared human traits. 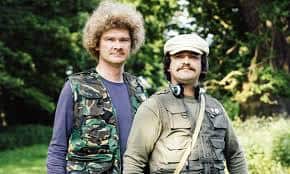 It’s essential to see Detectorists in its entirety before forming an opinion of the series. This is a comedy of many great little moments, some which are throwaway and some which build to a pay-off later on. The little touches, such as the rival decetorists from the Antiquisearchers resembling Simon and Garfunkel or a series of jokes about Andy’s inability to switch his TV on, are funny because they are so unexpected and they more than make up for the odd predictable moment (one character, having hit rock bottom, is shat on by a passing bird, a joke as old as the act of defecation itself). There are little narrative twists and turns throughout and by the excellent final episode all the threads are neatly tied up, an unfashionable narrative convention that works perfectly here. While I would love to see a second series of Detectorists, the first one is so complete and brilliant that I almost hope they leave it at that, although I hope Crook keeps writing and directing further comedies as on this evidence he could become a major comedy force to be reckoned with once more.

Detectorists is released on DVD on 10th November 2014. Extras include a making-of documentary and picture galleries