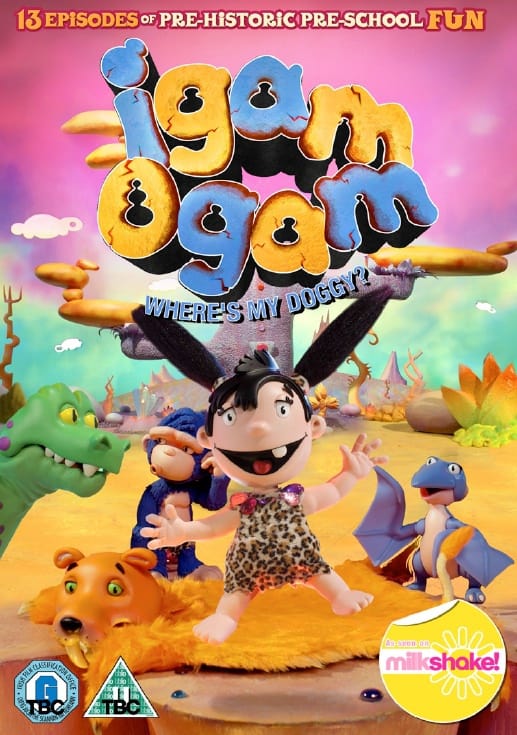 Igam Ogam is a prehistoric cave girl, exploring her world (I don’t think it’s supposed to be earth) accompanied by her friends, Roly the Monkey, Birdie the Pterodactyl, Doggie the Lickisaurus ( a dog-acting dinosaur a bit like the Flintstones, Dino) , Triple Tog who is essentially a talking rug made from a sabre-toothed tiger and Big Daddy a huge Tyrannosaurus Rex.

It’s all very hyperactive stuff, and mainly consists of central character Igam Ogam (apparently translating as ‘Zig Zag’ in Welsh) darting about all over the place with her friends, going on wild adventures of discovery and shouting loudly all the while.

Narration is provided by Ruth Jones (Gavin and Stacy / Little Britain / Stella) whose calm Welsh tones provide some welcome relief and provide an anchor to the craziness, keeping the onscreen chaos firmly on the right side of annoying.

Of course, kids love it. My three year old daughter had it on repeat play for quite a while, and due to her current love of all things Dinosaur related, it was right up her street (or prehistoric equivalent!). I quite like the fact that it employs stop-frame animation and model-making, which is nice to see, rather than being just another children’s cartoon. It has also apparently become a touring production too, so has been a runaway success for something that started off relatively small-fry, originally appearing on Channel 5’s ‘Milkshake’ children’s television show. 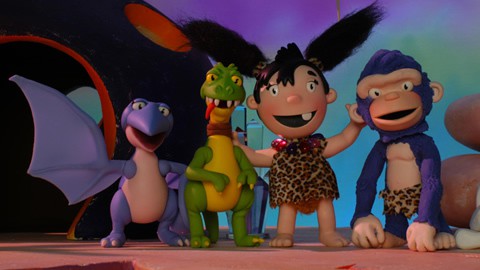 My main bugbear with this, at the risk of sounding all middle-aged, is that I’m not sure it effectively teaches children to listen and behave themselves and actually makes it look exciting not to obey grown ups’ instructions!  (I’m actually making myself laugh as I write this in my smoking jacket, drinking a sherry in Victorian England!! Bah, children should be seen and not heard, etc).

Here’s an example: The T-Rex, ‘Big Daddy’ (unfortunately not voiced by the late Shirley Crabtree), is essentially a father figure to Igam Ogam, supposedly keeping her in line with the usual parental nagging – to tidy her room, come in for dinner etc etc. Igam Ogam either regularly refuses these requests, or seems to take an absolute age to get around to heeding his commands! I’d be absolutely livid at the ignorance to my authority….

(Now i’m really chuckling again picturing my three year old refusing to tidy her room and running off laughing instead).

Oh well. Despite her disregard for authority and seeming lack of ability to listen, this is good fun. Igam Ogam does learn from her mistakes and there are usually lessons to be learned or some sort of moral to each story; whether it be about not treating people badly, sharing, valuing friends and the like. The animation is great and each of her friends are entertaining characters in their own rights. And while it keeps the kids entertained it gets a thumbs up from grown-ups too!

Igam Ogam ‘Where’s my Doggy?’ is out now on DVD, released by Signature Entertainment.