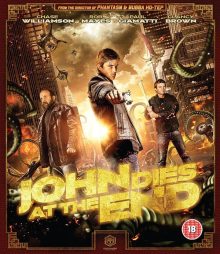 Well, I’m afraid I’m going to be writing that kind of review for John Dies at the End, which is based on the cult novel by David Wong (whose real name is Jason Pargin). I made the classic mistake of reading this quite recently before watching the film. I’ve done this a couple of times before and regretted it. Never Let Me Go was a film I felt was very well made, but because I’d read it a couple of weeks before, it struggled to match up and the experience of watching it was too strange as my own vision of the story seemed so fresh in my mind. I read Cloud Atlas just before the film came out too, but that was a slightly different experience as I had some problems with the book. The film actually addressed these problems so in some ways was a great adaptation, but on a scene by scene basis the film was flawed so on a whole it still felt disappointing.

Which brings me to John Dies at the End. I won’t try to explain the plot too much as it’s bat-shit crazy and the real ‘truth’ behind the madness isn’t explained until near the end. What I will say is that it’s the story of David (Chase Williamson), a loser whose life gets flipped upside down and ripped to shreds as he and his slacker friend John (Rob Mayes) come across a mind-expanding drug known as soy sauce. The ensuing chaos includes (among other things) a TV mystic/psychic who’s actually real, a demon made up of the contents of a freezer and a swarm of tiny insects that take over people’s bodies.

I had a similar reaction to the john Dies at the End film adaptation as I did with the Cloud Atlas one. As with David Mitchell’s novel, I felt Wong’s writing was great on a chapter by chapter basis but as a whole I had a few problems with the book. It’s very funny, the characters are well formed and the sheer insanity of what happens is all part of the joy of reading the story. However, I felt it was too long and due to the seemingly random nature of what happens to David and John I struggled to stay engaged with it. Like the Cloud Atlas film, the John Dies at the End film manages to improve upon the overall structure, making it more engaging to watch than the book was to read, but once again the presentation of the individual elements aren’t as successful. 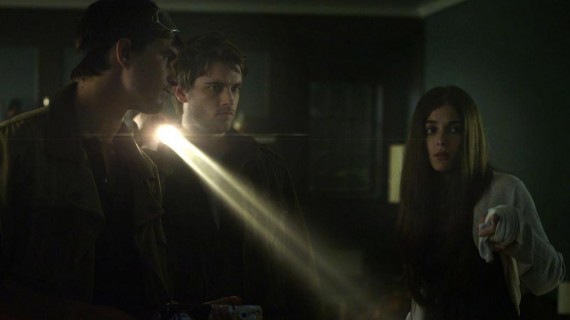 I find it hard to put my finger on exactly what is missing. I admire director Don Coscarelli’s heavy use of practical effects although the low budget does show and the scale of many of the effects pale in comparison to what my mind’s eye was painting when I read the more outlandish parts of the novel. The performances are maybe another element which let it down a bit. Some of the co-stars such as Paul Giamatti and Glynn Turman are decent, but Chase Williamson and Rob Mayes, although not bad as such, don’t quite have the charisma to pull off the humour from the book.

And that’s one of the big things that didn’t work in general. I laughed out loud regularly reading the book, but not once during the film. It just kind of falls a bit flat on screen. Perhaps it’s because on page the ludicrous things that happen seem hilariously baffling, but when we see them ‘in the flesh’ they’re just a bit silly.

What I felt was maybe causing everything to fall flat more than the weak humour was the lack of heart and soul. OK, so the book is hardly a heartwarming romantic drama, but the relationship between David and Amy is actually quite nicely handled, whereas in the film she barely features. There are quite a few chunks of the book missing actually, which isn’t a problem, that’s often the best way to make an adaptation work and it helped streamline the film nicely, but I felt there wasn’t enough drama or excitement due to so much being skimmed over. David just kind of goes along with things in the film, whereas in the book he gradually reaches the end of his tether.

I won’t be too harsh on the film though. It is still admirably unique and I think if I hadn’t read the book quite recently I would have found the barmy nature of it more endearing. It’s not a poorly made adaptation by any means, it just lacks the spark of what made the book great, even if it did manage to successfully streamline its narrative. Fans be wary, newcomers add half a star or so and give it a try.

John Dies at the End is out on 17th February in the UK on DVD and Blu-Ray, released by Eureka. I watched the Blu-Ray and it looked and sounded great. There are a fair few special features too. One ‘making of’ featurette is OK, but nothing special. I preferred the featurette looking at the special effects in the film which is great, showing numerous tests done on the practical effects in the film. An interview with Paul Giamatti is a little gushing, but fairly interesting. 10 minutes worth of deleted scenes include some more philosophical moments to the film but lack some of the elements of the book I’d have liked to have seen on screen. There are also some casting sessions if that interests you. All of these features are under 10 minutes though. The main draw is a feature length commentary with Coscarelli, Williamson, Mayes and producer Brad Baruh. This is a great listen with no down time, offering plenty of insight into the production and post production process, although Coscarelli kisses his actors’ arses a little too frequently.