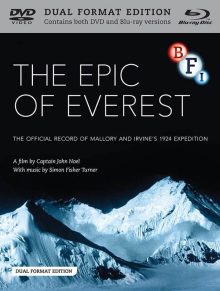 The 1920’s saw the final years of silent film give forth some of the finest examples of narrative cinema. With World War I over, more resources and energy could be put towards artistic endeavours and some of history’s greatest directors (Murnau, Lang, Chaplin, Keaton) were upping their game with every release, showing what the format was really capable of. Amongst the well known classics released at the time, another style of filmmaking was drawing in the crowds though – the travelogue. In the early days of cinema, audiences loved to see places and events they couldn’t get to witness themselves. At the turn of the century these were often rather blandly presented and mere eye-candy for the general public, but gradually filmmakers began to attach stories to the footage, culminating in the hugely popular Nanook of the North. This took the idea of dramatising ‘reality’ even further, actually staging many sequences to create a romanticised story which proved a much more exciting experience than what came before. The success of the film helped the genre become even more popular and spurred on documentary makers to push that little bit further.

Another approach to the travelogue documentary was to track great expeditions and adventures which already had an exciting in-built story. Herbert Ponting was one of the pioneers of this approach, tracking the infamous Terra Nova Expedition of Robert Falcon Scott between 1911-12. His footage wasn’t compiled into a feature film until 1924 though in the highly regarded The Great White Silence. The BFI re-released that on DVD & Blu-Ray back in 2011 and now they’ve turned their hands to another document of a great adventure, The Epic of Everest, also released in 1924 and inspired by the work of Ponting.

Directed by Captain John Noel, a soldier by profession before turning his hand to photography and cinematography, The Epic of Everest follows George Mallory, Sandy Irvine and their intrepid team of adventurers and sherpas as they set out to conquer the mighty peak of Everest, a feat not yet achieved by man. Without wanting to ‘spoil’ the ending, if that’s possible, the expedition was a failure (nobody reached Everest’s peak until 1953) and the entire summit team perished for unknown reasons. Luckily (for filmgoers at least) Noel wasn’t amongst the tragic few and his footage became a haunting elegy to the mountaineers.

I enjoyed this film a lot more than I expected. I offered to review it as I thought it would be an interesting curiosity with some nice nature photography, but whilst it did offer exactly that on the surface, it had a real hook that I wasn’t anticipating. The story isn’t powerfully driven. When compared to the riveting narrative documentaries we enjoy these days such as Senna and Man on Wire, it is glacially paced (sorry). Yet there’s a captivating hold in each and every image. The early scenes where we watch the local Tibetans act up to or shy away from the camera have a natural simplicity to them and it’s wonderful to step back in time as such and witness it. Then you have the shots of Everest itself. 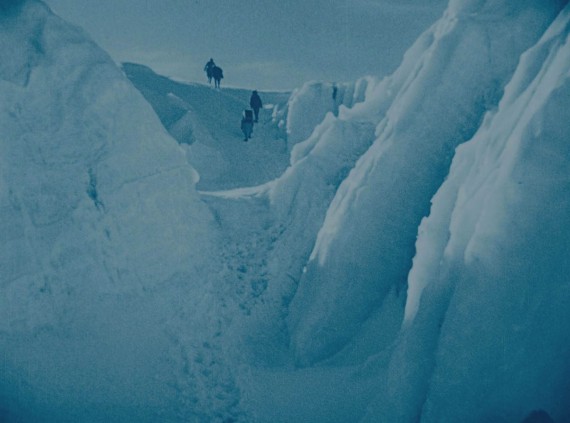 The mountain of course is ever present in the film and Noel captures it with an almost ghostly beauty. Long, static shots allow the wind to create motion in the frame through clouds of snow whispering over the peaks. The mountaineers are often shown as tiny specks against its mighty expanses rather than following them face to face. This is particularly the case in the later scenes where the conditions proved too much for Noel and his equipment, meaning the final attempts at reaching the summit were shot from a neighbouring peak, known as the Eagle’s Nest, using an extreme telephoto lens to capture the action. This means that although the most dramatic scenes lack the ‘in-your-face’ excitement of modern reconstructed documentaries such as Touching the Void, the shear scale of what they were up against is clearer. Also, the fact that they were battling ever closer to their deaths gives those shots of tiny black marks against the white landscape a haunting sense of hopelessness.

What helps add to the eerie beauty of the experience is the stunning new score the BFI has commissioned for this re-release. Simon Fisher Turner, who also composed the new score for The Great White Silence and is best known for his collaborations with Derek Jarman, brings us an ambient but richly textured and varied accompaniment to the film. Using subtle sound effects as well as instrumentation, the music creates a wonderful dream like atmosphere, helping you lose yourself in the imagery. Mojo magazine recently voted it the soundtrack of the year and for good reason.

Although I’ve been rambling on for a few paragraphs, I’m finding it hard to put into words exactly why the film works so well though, other than dragging out a thesaurus and finding alternatives to ‘haunting’ and ‘beautiful’. All I can say is that I was strangely enthralled by this chance to take an almost mystical step back in time to watch man try and fail to conquer the might of nature. Indeed, the title cards often have a poetic way about them and ponder the spiritual prospects of the area and those that inhabit it. The search party’s signal that all is lost by marking a large black cross on the mountain side and the red tinted final shots of Everest at sunset add to this lyrical display and helped cement the film firmly in my mind.

From its era and description it may not seem like a ‘must buy’ Blu-Ray, but for those with an open mind who can live without the thrills and spills you’d expect from a documentary charting such a treacherous journey, you’re in for a real treat.

Epic of Everest is out on now in the UK on Dual Format Blu-Ray & DVD, released by the BFI. You can also get it in a double set with The Great White Silence. I was sent the Blu-Ray disc to review. The picture quality is exceptional for a film of its age. The grain is quite strong and light scratches are apparent, but overall the detail is incredible and the original tinting has been restored to great effect. Although people think of Blu-Ray as a format best suited for glossy, CGI filled blockbusters, I’m more in love with how good it can make classic releases look and sound, allowing the experience of watching them feel closer to how it would when they were first shown on the silver screen. It takes a lot of work from companies like the BFI and Eureka though to get them up to scratch and I applaud them for it.

Anyway, for the discs’ audio you get a choice of the newly commissioned score by Turner or a recreation of the original score (which I didn’t listen to I’m afraid). You can also hear some additional musical pieces which accompanied the film’s premiere screening at the Scala in 1924 through the special features menu. Here you can also watch a short video piece looking at the composition of the new score, an introduction to the film itself and a look at the restoration process.

With the Blu-Ray/DVD you also get the customary booklet crammed with essays and background information too. This makes for great reading as always.