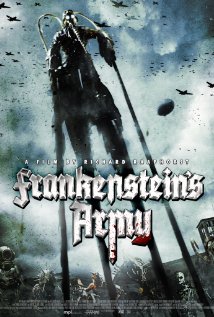 Filmed as a ‘found tape’ horror movie, we join a group of Russian soldiers heading across Germany who, after finding a weird half-burned deformed carcass in some woods, stumble across a seemingly deserted Nazi complex, surrounded by open graves. After a brief search they’re confronted in a basement room by a bizarre masked figure who is wired directly to the mains. He attacks the group’s commander with a built-in drill/saw, relieving him of his intestines. And thus the gore begins!

The hand held camera work takes us into the thick of the action, not so much seeing events unfold as being part of them. In the initial stages of the film we’re seeing the camerawork from a couple of soldiers in the group, later we’re watching footage from a lone soldier’s camera as he investigates alone, and finally watching the footage of a crazed Nazi scientist as he films his own diabolical creations.

A very gritty, stark and grimy looking movie, it starts off well. An impatient interrogation scene where the questionee’s fingers are brutally removed with a knife eases us in for what will surely be an unsettling movie. Yet when we get our first glimpse of the Nazi soldiers, there’s no sign of brutal commanding officers, barking dogs, firing squads and the sinister trappings of the third reich. Instead it’s pure comedy as a guy with an ‘iron maiden’ (not the band) opening and closing steel facemask/trap appears, trying to crush heads, a gasmasked creep with long stilts to aid walking and a hedgetrimmer where his face should be advances along a high gangway, while various other surgically enhanced horrors pop from every alcove, complete with moaning ‘Mr Blobby’ noises that raise a smirk rather than terror. In fact, if said abomination had appeared he may well have been the most fearsome of the fiends! 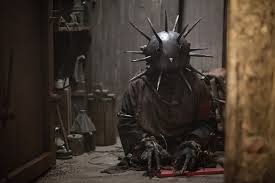 The film seems to follow a horrific then ludicrous format for most of the rest of the movie. One minute it’s the stuff of nightmares, the next minute it’s just plain silly. A man with a propeller fused with his head appears, his rotating death-blades fairly easily overcome by severing his fuel lines, making him instantly combust. I laughed out loud! Not sure if it was supposed to be funny though!  I think it was supposed to be horrific! Yet when a very young innocent German boy is mercilessly grabbed by the Russians and hurled down a blood drenched death-chute into the arms of a nutcase assailant, that is far more horrible and uncomfortable to watch than any over-the-top costume-work.

It transpires that one of the group, Dimitri, has actually been secretly ordered to find and film this place, at the expense of his crew of men. We realise that all of these beings have been created by a Nazi scientist following the work of Victor Frankenstein from his recovered journals. Some of the beings are fighters, some are workers. The silliness disappears somewhat as Dimitri breaks away from his group, most of whom have been killed by this point. Now we see things from only his perspective.

The discovery of an area that’s been set up as a living room amidst the blood and chaos, complete with gramophone playing, nice rugs and tea things, and a weird teddy bear with a woman’s head is particularly odd. Back to the action, a scene where a barely alive man is lying in a cart of dismembered body parts, screaming as he’s pushed away through some butcher-style bloodsoaked curtains by a lumbering hulk is pretty unsettling, and as Dimitri is finally captured by some of the creations himself, the gory finale begins. 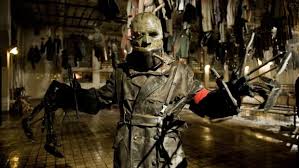 Now we’re into the proper gore territory, almost like someone suggested the film should now descend into full-on ‘Saw’-mode. One of Dimitri’s comrades is actually still alive having been captured too. We find him tied up and screaming with no limbs, having the top of his head removed as the crazed scientist/surgeon tampers with his brain. There’s some comic book logic here when we learn that the scientist has been fusing right and left sides of the brain, half Russian, half German and putting them into the heads of his creations for a ‘best of both’ effect. It’s all becoming quite horrible but interesting when suddenly…. the silliness creeps in again. A ‘man’ that’s essentially a table / barrel with legs, hops around the room assisting the scientist. It’s utterly daft which may have been the intention, but it ruins any chilling atmosphere that may have been struggling to make an appearance.

In the end the storyline kind of goes out of the window. It’s all about screams, gore and merciless creations going haywire. There is a fun ending, where Sasha, the soldier who was appointed camera assistant from earlier in the movie, makes an i’m-not-actually-dead appearance, dashing in to run off with the camera before the fiends disembowel Dimitri, the closing still image as the credits roll shows him being commended for his efforts by Stalin.

How to sum this up? It’s worth a watch, but don’t expect any dark psychological terror or real horror in the classic sense. Somewhat unfortunately it’s all about the gore, which is fine if that’s all you want. There is so much they could have done with this that they didn’t. Ironically, the promo films we’re shown in the ‘making of’ bonus feature actually look better than the finished film in my opinion, employing sepia tone and a grainy classic look like silent film stock. Where there could have been haunting atmosphere there’s blood and guts, which is a shame, and the press release comparison to Silent Hill fails to acknowledge that there’s not even a hint of the unnerving atmosphere of that movie.

Extras: An interesting ‘Making of’ featurette.