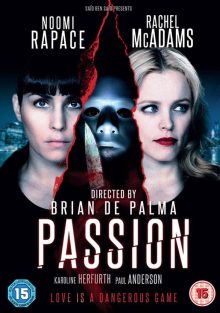 Board room politics and affairs of the heart in a high stakes business world leads to manipulation, back-stabbing and murder in this quasi-erotic, psychological thriller from Brian De Palma.

Passion is the story of Christine (McAdams), the ambitious, manipulative, self-serving boss of the German branch of an advertising agency and her submissive, creative protégée, Isabelle (Rapace). In what started as a nurturing relationship; Christine shows her true colours when taking credit for Isabelle’s work in order to gain another step on the corporate ladder. At the same time, the usually meek Isabelle is secretly having a relationship with Christine’s lover, Dirk (Anderson).

Isabelle’s assistant, Dani (Herfurth) is displeased with Christine’s behaviour and tries to coax Isabelle into taking control and revenge. When Isabelle does take the initiative she enters the spotlight of the company directors, forcing them to rethink Christine’s imminent promotion. In a counter move, Christine humiliates Isabelle in front of the other department heads, seemingly pushing Isabelle down a spiral of mental anguish and sleeping pill dependency.

Reprisals escalate, eventually leading to the cold blooded murder of one of our protagonists. All the evidence points to one person, but is it a set up? When everyone concerned has a motive will the real killer be brought to justice?

A French/German co-production, Passion is set in Germany, but with mostly English dialogue (some German with subtitles) and featuring a Canadian and a Swede in the starring roles. It is a remake of French film Crime d’amour (2010), starring the English Kristin Scott Thomas as Christine and French Ludivine Sagnier as Isabelle. Having not seen the original, I do wonder why this was remade so soon, if at all. 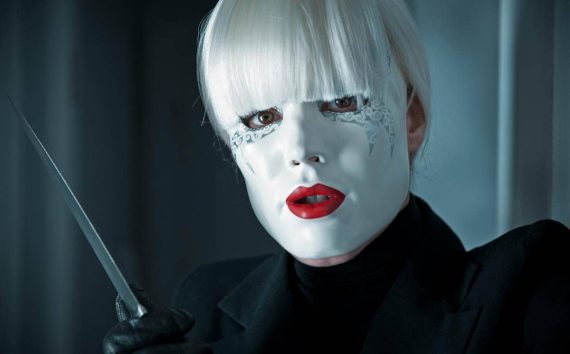 Passion is reminiscent of several films of the late 80s and early 90s such as Single White Female, Fatal Attraction and Disclosure. In fact, I could venture so far as to say that this is the psychological thriller remake of Working Girl, no really! Each of these contemporaries involved sexual attraction, and somehow mild mannered Isabelle manages to draw the sexual attention of not just Dirk, but also Christine and Dani. Although the setting is contemporary, the story seems like an amalgamation and re-telling, rather than something new. It does make Passion somewhat predictable for anyone that has seen the aforementioned films.

Although at its bones a psychological thriller, there is segment of Passion that shifts to crime drama feeling like you switched over to catch an episode of Law and Order part way through, before returning to the movie. So much so, I was actually expecting to hear the “dun-dun” sound whenever the polizei or prosecutor made a revelation!

With a few plot holes and odd character choices, it really is the female performances that carry Passion. There is no going wrong with McAdams or Rapace. Both are established and rising stars with a credible back catalogue and BAFTA nominations. Special mention must go to German actress Herfurth, who brings truth to Dani, a role that becomes ever more pivotal to the plot.

Overall, Passion was a very watchable thriller with enough twists and turns to keep me entertained. It is available now on DVD.