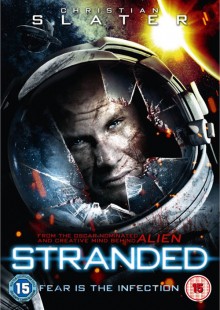 Opening on a shot of research outpost, the Ark Moonbase, we’re drawn straight into the action as an unexpected meteor shower hits, causing widespread damage and plunging the team into darkness, isolation and chaos.

We’re introduced to the characters immediately as we see them taking action to secure damaged areas and concentrate all remaining power to essential life support only. Alone, with communications channels down and only limited electricity and oxygen supplies, the intensity level begins to soar as the team realise they may have an unwelcome guest onboard!.

Taking place in almost real time, the usual ten-strong team we’ve come to expect in this sort of movie has been stripped down to just four characters, a Colonel (Slater), two scientists (Fehr and Matysio) and an engineer (Therriault), attempting to deal with a contagion outbreak as a result of a meteor collision. What keeps this plot interesting is that for the initial part of the film, we’re not sure whether the things they see and hear are real, or hallucinations as a result of exposure. When the ‘alien’ is first revealed, I must admit I almost turned the movie off as it seemed pretty ridiculous, comical and unnecessary, and not in keeping with film up to that point. However, the fact that what occurred might have been in the mind of Amy Matysio’s character kept me watching, which I’m glad I did.

What I liked about this film is its simplicity. The narrative is very linear; just unfolding as it goes, with no character backstories or additional information. In fact, we learn very little about any of them except for what we see of their actions and interactions with each other. The cast all deliver within the confines of their roles; none are particularly unconvincing but neither do any particularly stand out. Having said this, Michael Therriault’s portrayal of a man becoming increasingly mentally unhinged is well played. 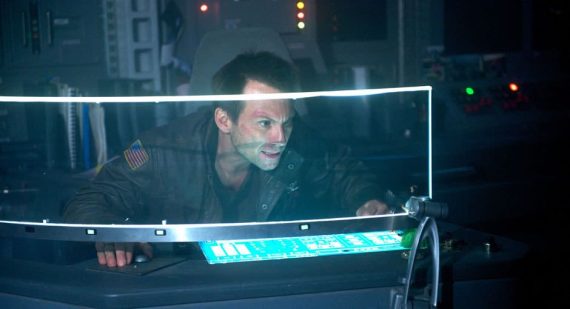 The problem with the plot itself is that any film with even a whiff of alien impregnation / transformation / spores / viruses etc, will always be compared to the classics in which these topics were more famously dealt with. John Carpenter’s version of The Thing is truly awesome, while the dark menace of the first outstanding Alien movie pulled off dark claustrophobic space horror to perfection. The alien virus angle has been tackled in numerous science fiction films, from the deadly serious through to the comical; such as the original Creepshow movie, featuring a sketch where Stephen King’s character is exposed to alien bacteria from a meteorite, promptly transforming him into some sort of vegetation based fiend!.

But, we can’t keep banging on about the classics, and instead have to judge this film in its own right. If you can give the ‘deadly aliens from outer space infecting humanity’ storyline another chance, then this is well worth a look.

With this film, the simplicity of the storyline, the minimal setting and small number of cast involved, together with the fair pace at which the storyline progresses, results in director Roger Christian creating a no frills, dark space shocker, from which any unnecessary fat has been stripped away.

It’s not trying to be the next blockbuster, but is head and shoulders above the zillions of bargain bin space oddities, and the absence of any nerdy sci-fi speak or over indulgences means that it will also probably appeal to those who don’t normally watch films within this genre too.