In a dystopian world you have to avenge a murder that you have been accused of. Welcome to Dunwall the capital of Gristol.

Dishonored is something of a rarity these days in gaming; a new IP. In a market dominated by the annual sequel cycle it’s nice to have something new. That said, of course, nothing is ever truly, 100 percent new. By this we mean that Dishonored, although having a fairly unique look to it, does bear strong similarities to other games we’ve played over the years.

Style-wise it has a steam punk feel to it and also reminds us of games such as Fallout 3 in the way that you are often scavenging things and also eating the occasional roast rat.

The world of Dishonored is dominated by a plague brought on by the many rats that are in the city and in fact you need to be careful that you don’t wander into an area where there are lots of them as can overpower people and then eat them alive.

Getting around them is one of the simpler problems in the game. Often when you encounter these packs of rats you either have to run or dump a helpfully located body for them to chew on, instead of you. In Dishonored you do get to choose the way that you do things, to a degree, it isn’t a free-roaming, sandbox game.

As you work your way through it the main aim of the game isn’t to kill everyone you meet, but to get passed them without being detected. However, if this sounds like too much hard work, you can despatch everyone and anyone should you fancy it. If you choose the latter path though you won’t score as highly.

Choosing the way you go through the game brings us on to our main issue and that’s the climbing mechanic. Dishonored expects you to clamber over boxes and reach up to ledges so that you can go on to roof tops and the such.

However, as it’s an FPS game it’s hard to know where you can climb or jump as you have no frame of reference. In fact it reminds us of games from the 1990s when climbing looked more like you were pogoing up and down like a punk on the dancefloor in the 1970s.

Whereas in many current games you would get a climbing animation or some such, in Dishonored, in order to get to a higher level you simply press the jump button, repeatedly, until you get to where you want to go. 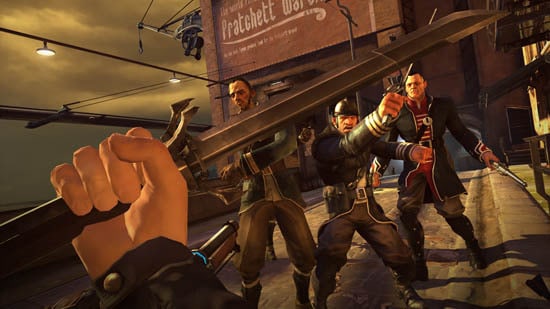 It also has the old favourite that when you look down your character has no legs, which doesn’t help you get an idea of what you can and can’t do.

This doesn’t help when you are up on high somewhere, such as on the large pipes that are dotted around the city, as you don’t know where your feet are making it very easy to fall off!

Something else that reminds us of games of old is when you pick things up. We’ve got used to game characters being shown holding said items, things like bottles and glasses. In Dishonored you don’t see things held in the hand, they float in front of you. It’s just like Quake or Doom or simply that we’ve been transported back to 1998 and all the advances in gaming over the years never happened!

In many ways though these are only minor issues. We love the look of the game, the way that you have some RPG elements (you collect runes that you use to improve your skills), but it is still mostly an FPS.

So if you like your action to be stealth-based, like a bit of steam punk with a retro feel then Dishonored makes a good stab (no pun intended) at a new IP.