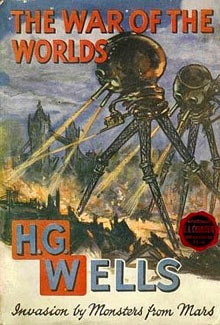 For Sci-fi fans there are few symbols as potent as Wells’ tripods stalking the earth, incinerating the feeble human beings with their heat rays, sparing the odd human their life in order to feed from their blood. I initially read War of the Worlds a good few years ago and all I really remembered was a horrifying scene where people are boiled alive in a river and a lot of hiding in basements being utterly terrified. Much of my recent memory of the story has been infiltrated by the Speilberg film of the same name, so images such as long limbed aliens with metallic eyes have become mingled with the essentially English sensibility of Wells’ 112 year old masterpiece.

One thing I had forgotten about the novel is the prelude to the story, where we are told much of what the protagonist now knows of the Martians since their demise, and much of the science surrounding their invasion of our planet. It is striking (not least for the time) how plausible the scenario posed is – quite simply Mars is a planet far older than earth, that has evolved way beyond our current state, and it’s inhabitants have retreated to the planet’s core to await other options for survival. The Martians arrive in falling stars, actually small pods, equipped with the devices and machines through which to build and unearth their long buried tripods. The framing of the book with this level of hindsight gives our narrator a great authority and allows us as a reader to share in his panic and confusion, safe in the knowledge we would not bear witness to his death (entirely suitable to the Victorian sensibility).

Unlike the dramatic invasions we see in modern Sci-Fi films and novels (including versions of this novel for film) there is no immediate panic and devastation – there is instead a delightful English nosiness around the arrival of the Martians and a sense of comfort and security taken from the presence of the armed forces. It is only when they have completed their first tripod and the masses have seen and felt the results of the heat ray, that any kind of panic begins to spread. Our narrator finds himself witness to these initial events and survives only through luck and finding ditches and crevices in which to hide from the machines, offering us a hurried and terrified first person narrative of events.

Wells does a wonderful job of building fear, suspense and intrigue without resorting to unnecessary acts of violence or gore. He allows us to see how the Martians use human beings for food, and to witness the mass destruction of boatloads of people at the hands of the heat ray and in the subsequent boiling river. The novel shies away from melodramatic action sequences and, as one can imagine would happen in real life, our narrator hides in cellars and basements when the worst of the Martians acts take place. He does not, however, shy away from the human destruction caused by such panic and fear, and one of the more humble moments of the novel is the matter of fact way in which he describes killing the curate with whom he shared a cellar and who threatens to betray their hiding place. The novel’s central premise – the desire for each individual to survive against all odds – is delivered through the narrator, who never gives up the belief that it will somehow be ok and he will return to his wife in Leatherhead.

The novel does, at times, show it’s age, but its wonder, marvel and genuine ability to chill never fail to surprise me, from the bulbous, malformed and tentacled Martians, to the level of detail explored in their building machines, Wells effectively paints a terrifying and wondrous account of the time the world was invaded by Martians. It contains no scandal, no melodrama and a fundamentally plausible explanation of the events that could have taken place at the end of the 19th Century, as man went about their “little affairs, serene in their assurance of their empire over matter.” Wells’ success lies in his choice of delivery, the point of view of one man presents a situation so real and so vivid you don’t recall it as fiction until long after the final pages. We feel genuine joy and pride when the Martians are beaten by our planet, and of all of the monsters still yet to come for Wells and his readers in the early 20th century, the Martians still prove the most haunting.