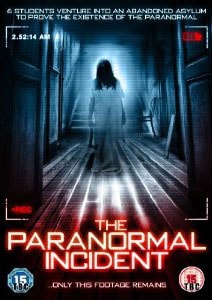 Following quite a cool opening credits sequence with ink drops spreading out in water, further enhanced by old sepia photo effects, The Paranormal Incident begins properly with a young man, Jonathan (Oliver Rayon), being interviewed in his hospital bed by a police psychiatrist, Rebecca (Amanda Barton), who is trying to establish if he killed his friends just days before or if he’s actually telling the truth about something else, maybe supernatural, attacking him and his friends.

Using that trusted old device of recalled flashbacks the viewer is then treated, and I use that word advisedly, to Jonathan’s version of events. This framing device kind of reminded me of James C. Watson’s cult film Night of the Demon in which an injured professor tells the story of how he and his fellow researchers were killed off by a demon – actually a very unconvincing yeti, which looked more like a brown coloured incredible hulk, circa 1980s!

Anyway, I digress. Basically Jonathan tells his sexy interrogator that he and five other college students embarked on a film project exploring an old mental asylum in search of evidence of the paranormal. Suffice to say – and I won’t be spoiling anything for you here – they find the evidence they were looking for, only in rather more unpleasant ways than they had expected.

The usual shenanigans occur: equipment disappears, people hear weird noises, walls appear where once there were doors, lights fails and then people go missing, never to be seen again. One by one members of an increasingly panicky research group end up as toast for ghosts until, somehow, Jonathan makes it out of the mental asylum after coming back to the ‘party’ late, for it was he who, as a prank, locked the rest of his fellow students in the institute to begin with, which is why the police are understandably suspicious of him.

By viewing the video footage taken by the students and by hearing Jonathan’s own testimony, the police try to piece together what happened over that fateful four-day period. 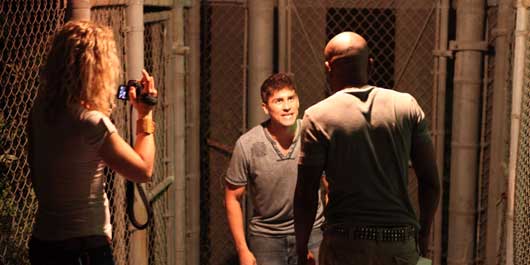 The found footage sub genre of horror films has been growing in popularity with filmmakers ever since cheaper cameras and editing facilities democratised movie making in general back in the early nineties. And that’s not necessarily a criticism, just a statement of fact, albeit a fact accompanied with the caveat that with onset of ultra low budget filmmaking comes more movie shaped crap!

Now when this type of thing is done well, as with Cannibal Holocaust, The Blair Witch Project, [REC], and Paranormal Activity it can be quite disturbing, but in most cases it’s done badly or, as in this case, very averagely, and the overall affect is therefore just under whelming.

Don’t get me wrong, The Paranormal Incident isn’t all bad, it’s just that there’s very little originality here and what isn’t original has been done better elsewhere. Even the setting, in an old asylum, has been done many times before and with creepier results.

As with many lower budget productions the film displays sound issues with sound levels changing, sometimes dramatically, which really should have been sorted out in post-production. For example, one character’s dialogue, at times, sounded like it had been recorded in a fish tank.

I’m not too sure what to say about the acting as most of the actors are essentially just freewheeling it as noisy and annoying teens, which they do fairly well for the most part. I didn’t think much to the performance of the lead actor though – I felt he was very one dimensional, even when he’s professing his love for another of the movie’s student characters.

There are the usual scenes that don’t really drive the plot forward, just help sell more DVD copies – Yes; I’m talking about the gratuitous sex scene here! And, even though there’s a fair bit of talking in the film, the viewer never really connects with any of the characters, most of which are the usual annoying and vacuous teen stereotypes.

There are too many shots of people wandering around dark corridors for no real purpose apart from to pad out the film’s running time, although, to be fair, when the jump scares do materialise they work quite well, there just aren’t enough of them. I liked the sleeping girl’s hair being moved around by an invisible force and some of the weird, disembodied voices were quite creepy too.

The group find an old cinefilm revealing some old, slightly disturbing, hospital footage, but this is a wasted opportunity to generate some genuine chills, as what we see just isn’t disturbing enough, or interesting for that matter. In fact the standard camerawork is pretty variable, although I guess this is deliberate as this would reflect the different student’s own filming abilities.

Towards the end some of the shots and edits used created confusion, which is OK if there’s a purpose to it, but confusion can also lead to the viewer just not caring anymore and that’s what happened to me eventually – I just didn’t really care about the characters or what happened to them, at which point I became disengaged from the film and struggled to focus on what was happening and to who. A shame really as the ending should have had more impact on me than it did, as it was fairly original.

The Paranormal Incident has recently been released on DVD and is being distributed by Arrow Films. The only extra on the review disc was a so-so trailer.