In the 1970’s between ’71 and ’78, the BBC produced an annual ghost story each Christmas to further chill the bones in the winter period. These were short 30-minute or so films largely based on classic literature, chiefly the work of M.R. James, but original scripts were written once these dried up.

The BFI have been gradually releasing collections of these films on DVD, along with a couple of ‘unofficial’ additions to the series (according to Wikipedia that is). I foolishly missed out on the first two volumes, but caught up with volumes 3 and 4 which contain the films Lost Hearts, The Treasure of Abbot Thomas and The Ash Tree on vol. 3 and The Signalman, Stigma and The Ice House on vol. 4. 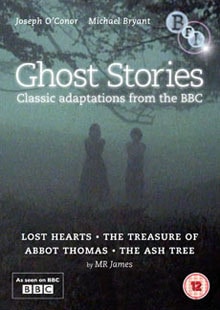 1973’s Ghost Story for Christmas was Lost Hearts, an M.R. James story adapted by Robin Chapman and directed by Ghost Story mainstay Lawrence Gordon Clark (the only film he didn’t direct was The Ice House). It’s a fairly straightforward horror affair following recently orphaned Stephen (Simon Gipps-Kent), who goes to live with his uncle, only to find the house is haunted by the ghosts of two children his own age. As his uncle begins to act more and more peculiar it seems that the spirits may be warning Stephen about something.

It’s an unremarkable, but entertaining little horror story. The imagery of the ghost children gets spookier as it goes on, but some shaky child-acting and basic TV makeup and lighting spoil things a little. The locations look great though and it’s a fun old fashioned yarn.

Next up is another James adaptation, The Treasure of Abbot Thomas. Now this is where things kick into gear. Wonderfully adapted by John Bowen, the story is more of a mystery than a horror with its treasure hunting storyline, but has its share of spooky scares as a reverend (Michael Bryant) and his young friend try to find the remains of the Abbot’s fortune in a grand old Abbey. The script is a lot of fun, playing on the reverend’s arrogance with plenty of wit and humour. Bryant’s enjoyable performance really brings this out too. The film is quite subtle even with the elements of humour and shocks, and remains highly entertaining and classily directed. 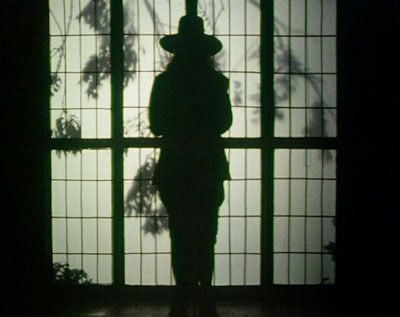 The final film in volume 3 is The Ash Tree. This is one of the more unusual entries to the series, with another James story describing the troubles eighteenth-century nobleman Sir Richard Fell (Edward Petherbridge) comes across when he inherits a stately home dominated by a sinister ash tree.

A little more naturally lit than the previous films which had that old TV sheen to them, The Ash Tree is a handsome looking film, again making great use of its locations. There is a great use of sound effects too, making for a very creepy experience with a darker edge than the other films in the set. It has a bizarre finale and some shoddy creature effects that didn’t quite work for me, but overall this was intriguingly odd and mysterious film that effectively holds its cards to its chest for the most part. 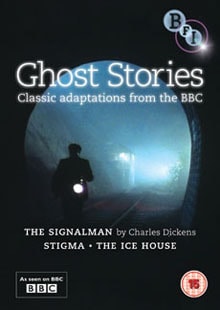 With Clark running out of M.R. James stories that he deemed ‘filmable’, the next Ghost Story for Christmas looked to the great Charles Dickens for inspiration with an adaptation of The Signalman. Adapted by Andrew Davies (Pride and Prejudice – the superior BBC version), this is probably the strongest film from both sets.

A traveller (Bernard Lloyd) comes across a signal box out in the countryside manned by a troubled signalman (Denholm Elliott) who is haunted by a prophetic ghost that appears before a couple of major disasters that occur on the track. When the spirit appears several times to warn him of another impending tragedy, the signalman can only wait in horror for what is to follow.

The tension is palpable as the details are slowly unraveled and we await the inevitably grim conclusion. The dark recess of the tunnel by which the signal box sits is put to good use in this atmospheric film. Although Lloyd is a little hammy, Elliot delivers in spades as the disturbed signalman and Davies’ script turns Dickens’ often overly descriptive prose into a lean, taught and frightening yarn. Clark directs a couple of rather terrifying moments too, although some dated camera effects spoil these slightly. Minor quibbles aside, this is a wonderful adaptation of a classic story. 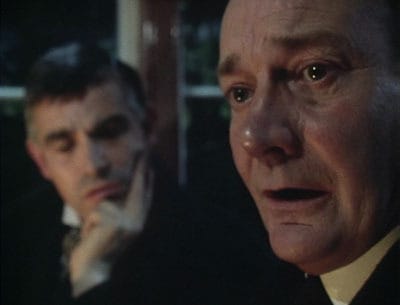 The final two films of the series gave up on period settings and classic literature as inspiration, moving to the present day with two original screenplays. The first is Stigma, the final Ghost Story for Christmas to be directed by Lawrence Gordon Clark. It charts the strange and bloody curse that befalls Katherine (Kate Binchy) after her and her husband decide to remove a large rock from their garden which looks to be the part of the remnants of an ancient monument.

Stigma suffers slightly from a weaker script and performances than its predecessors, but Clark throws out all the stops in delivering the scares. This is the most frightening film from the two sets as Katherine struggles to stop the blood that seeps out of her skin where there are no wounds or incisions. It has a nice slow burn too with the first 10 minutes consisting of seemingly innocuous activities that have a dark undertone hinted at through suggestive framing and symbolism. It’s a very strong, if slightly flawed addition to the set.

The final film in the series (until a revival in 2005) is The Ice House. Clark had left the BBC at this point to go freelance, so Derek Lister took the reigns to shoot John Bowen’s script. Paul (John Stride) joins a high class health spa run by a strangely over-friendly brother and sister. Drawn to the scent of an unusual vine, Paul is troubled by the use of an old ice-house that it grows from.

Unfortunately, although the story is nicely creepy and mysterious, the film never quite gets off the ground. Some unintentional humour from dated performances and fairly weak delivery of the horror set-pieces mean that, although admirably surreal, the film is probably the weakest of the two sets.

Ghost Stories Vol. 3 & 4 are out on 17th September on DVD, released by the BFI. The picture and sound quality isn’t bad although they do look their age, which adds to the charm in my opinion.

Each of the films directed by Lawrence Gordon Clark gets an introduction by the director. These 10 minute interviews are great, filling you in on a lot of background behind the films and their production. He retains a surprisingly clear and detailed memory about making the films, considering they’re a good 35-40 years old. The interviews do often discuss elements of the film though, so if you haven’t seen them before you’re best off watching them after the films instead of before as they are presented.

As with all BFI releases you also get a hefty booklet with each set. These are crammed to the gills with dissections of the films and information about the authors, writers and directors.